Ross arrived at Navy boot camp in Great Lakes, Illinois on June 17th. He was there by around 10:30 pm. I know that because he used his one phone call to call his girlfriend and she told me. I write him a letter about every other day. I’m afraid if I write him every day, his RDC (recruit division commander) will think he’s a mama’s boy and be even meaner to him, though if he doesn’t write me back sometime soon, I’m going to tell him that I’m going to write him every day until he does. (Just kidding. Maybe!) I don’t even know the date of his PIR (Pass in Review aka boot camp graduation)–because he hasn’t written me. (He hasn’t written anybody else as far as I know, either.)

I try to write him upbeat stuff like, I know you’re doing great because you’re so freakishly strong. That’s why we used to call you Bam Bam when you were little. Maybe you could tell your RDC to call you Bam Bam. Do you think that would help?

I would send him cookies, but you’re not allowed to send them cookies. Or anything else. And you’re supposed to send letters in plain white envelopes. If you send anything in a colored or different-sized envelope, they are sometimes required to open it in front of their RDC. (I told his girlfriend about that to avoid any potential embarrassing situation.)

Ross was not a letter writer before he went to boot camp, so I don’t expect that will change much in boot camp, but I got a great idea from some other Navy moms–send questionnaires that only require circling the right answer or filling in the blanks. It helps non-letter writers to actually respond plus they have very little time to write letters, anyway.

I’ve been working on a questionnaire for Ross. 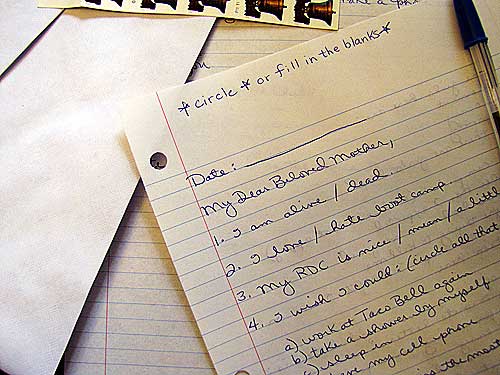 3. My RDC is nice/mean/a little girl.

a) smart
b) scary
c) pretty
d) there are girls here?

9. Boot camp is: (circle all that apply)

a) harder than I expected
b) not as bad as I imagined
c) they’re trying to kill me
d) what boot camp? I thought I was on vacation here

10. The amount of time I have to write letters is: (circle all that apply)

a) what time to write letters?
b) thank you for sending me a questionnaire to make it easy
c) I have hours and hours to write letters, I just forgot about you
d) 2 minutes once a week

11. When boot camp is over, the first thing I want to do is:

a) go to Canada
b) eat some good food
c) sleep
d) march some more! I love the marching!

Also, if you have a child going into the Navy, be sure to check out Navy for Moms. (Lots of good information there.) And thanks to the several of you who told me about it.