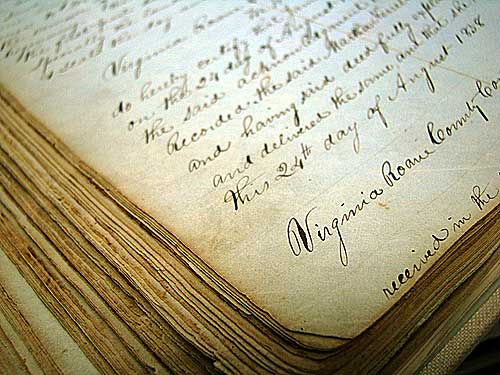 Saturday morning, I waded–and I do mean waded–through a foot of snow down the driveway. I just can’t get over the snow this winter. I’ve never seen anything like it. This is my fifth winter in West Virginia. It has never snowed this much before. I was excited one time at the old farmhouse when there was like five inches of snow. And that was ONE TIME. Oh, it snowed regularly. But just several inches at a time. And NOT A FOOT. We’ve had a foot of snow here three times this winter. And just as soon as one foot melts away, here comes another one.

It’s March. Let’s hope there’s not yet another one on the way. I think I’m ready to move on. I’m still amazed by it, though. It’s magical, frustrating, sometimes terrifying (if I’m driving), and always….just plain bizarre to me. I didn’t grow up around snow.

I haven’t been out of the house much lately. I only go out between snows. We weren’t between snows on Saturday, but luckily I didn’t have to do the driving. I hopped in with my escort at the bottom of the driveway, but while being escorted has its benefits (like, not having to drive on the snowy road yourself), it also means you have to go where they want to go, too. Which is how I ended up at the county clerk’s office on Saturday when I had no business there whatsoever.

Slightly (or exceedingly) bored while some paperwork was being processed that had nothing to do with me, I chatted up the very nice Roane County clerk, Charlie White. There is nothing quite like small town courthouses and small town county clerks. They know everything and everybody. And they even remember you personally. Because they remember everything and everybody.

I’ve actually been in the county clerk’s office quite a few times, digging out old deed books and looking at old wills. My family goes back in this county over 200 years. I love looking at old documents. They wrote so pretty back then. Somehow, we got to talking about the deterioration in handwriting (seriously, when you have nothing to talk about, the conversation can end up anywhere) and making guesses about when handwriting went downhill in America. We decided, with absolutely no scientific studies to back us up, that handwriting deteriorated after the invention of the typewriter and was then completely destroyed by the computer, which prompted Charlie to tell me that he had a really old manual typewriter in the back.

Oh my! Now you’re talking. Something for me to inspect. I leaped out of my seat, whipped my camera out of my purse, and headed toward the back, which left Charlie with no real option but to come with me. (I don’t think he minded.) 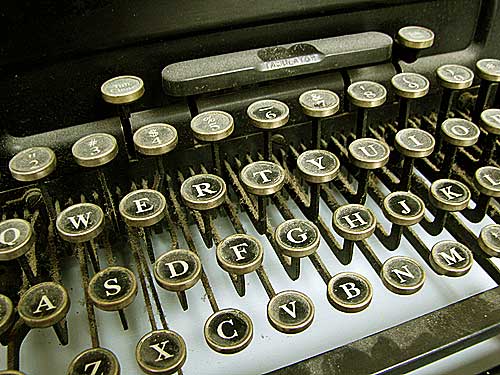 I haven’t seen an old manual typewriter in a long time. This is the kind of typewriter my father had. I can remember typing up little stories on it. I had a dollhouse and tons of those little glass animals. They lived in the dollhouse instead of people. They had very complicated, soap opera-ish lives. I wrote stories and stories and stories about my little glass animals. The king was a little glass bear. The queen was a cat. The cat, by the way, was bigger than the bear. (I can’t explain that, don’t make me.) I had this bizarre urge to hug this typewriter. It brought back all sorts of warm, fuzzy memories. 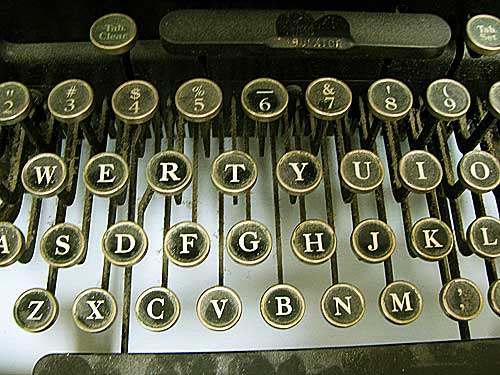 And I really wanted to dust it. 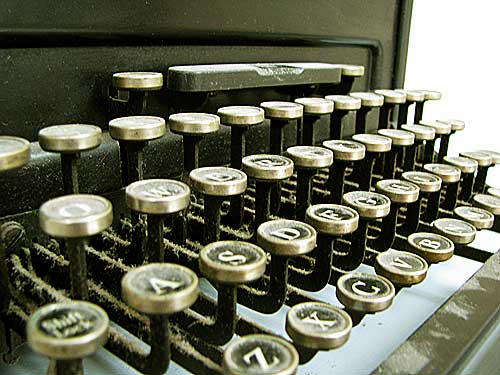 And then I wondered–would kids today know what to do with this typewriter? They’ve never even heard of a carriage return. 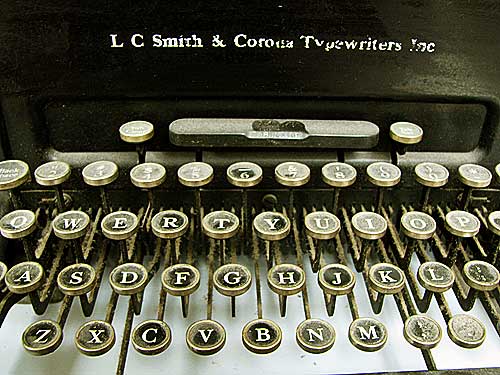 This particular typewriter, by the way, had an extremely wide carriage, made for the big documents that would come through a courthouse. 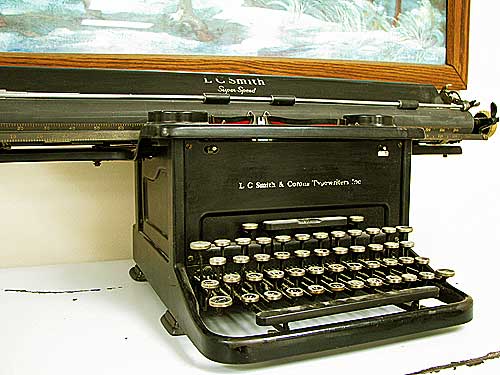 And then I said, “I must see the pretty handwriting!” Not that I hadn’t seen it before, but I was inspired to gaze upon it again. To marvel at the elegant hand-scripting of our forebears, who would have been as confounded as teenagers today by that gorgeous old manual typewriter. 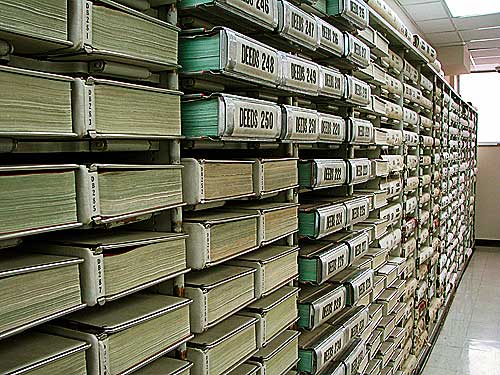 They didn’t need no stinkin’ typewriter. They knew how to write. Life was slower and people took their time. Charlie pulled out one of the oldest books in the courthouse for me. 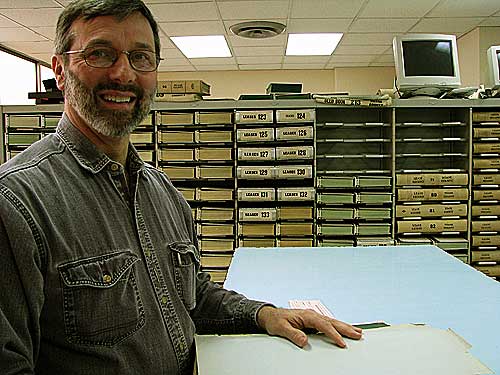 He pointed out how they used every bit of the paper back then, right up to the edges. 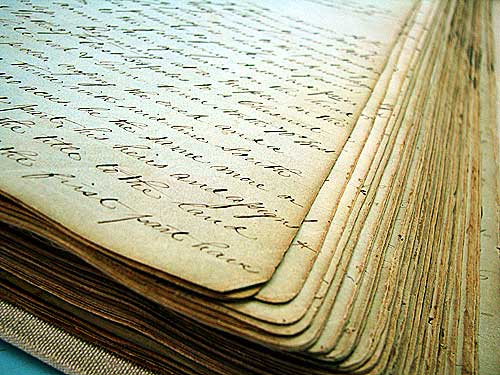 The frugality of our ancestors, in every little way, is a constant wonder when looking back at them from today’s world. 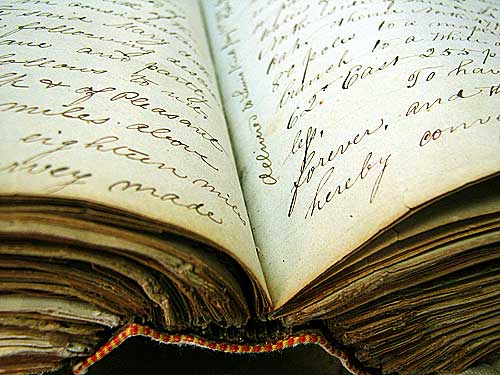 Encouraged by my enthusiasm for the precious old books, Charlie showed me his favorite oddity. West Virginia–in case you don’t know–was originally part of the state of Virginia. In 1863, West Virginia seceded from Virginia and became its own state, joining the Union in the Civil War. (Bit of trivia: West Virginia is the only state that was formed because of the Civil War.) There were never very many slaves in this area (compared to other parts of the South). This isn’t really plantation country, and much of what became West Virginia was populated by poor farmers trying to scratch out a living in the mountains. There were individuals, however, who could afford slaves. This bill of sale, from 1857, documents the transfer of two slaves in what was then Roane County, Virginia. 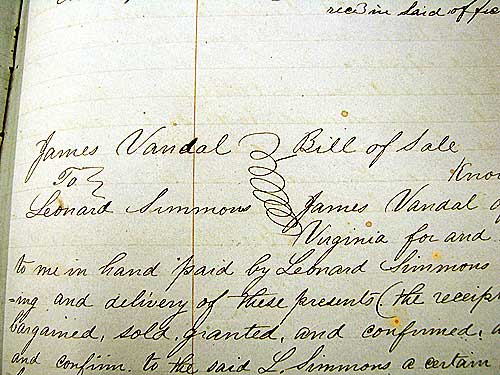 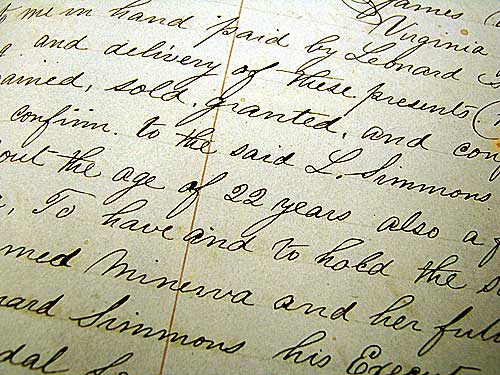 His name was Ben. There was also a girl, “say nine months” as the bill of sale reads. 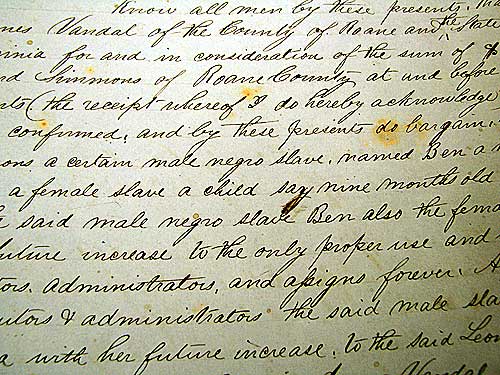 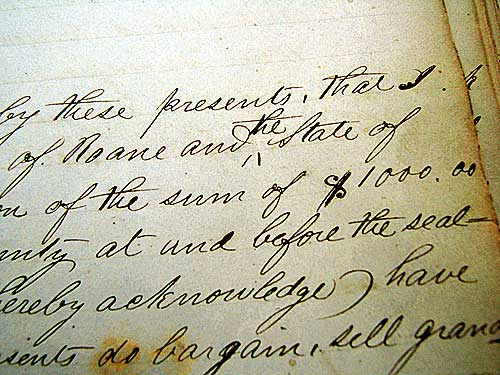 There’s something quite surreal about touching the original, ink-drawn pages of a transaction in human beings. 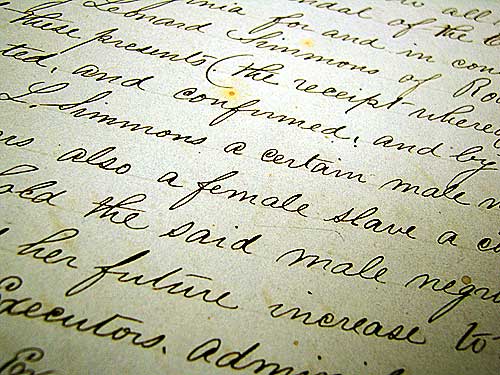 Ben and that baby girl weren’t slaves for long. They soon found themselves living in a free state. I’d love to know what became of that little girl. But courthouse records never tell the whole story, only parts. Glimpses of lives that are difficult to imagine today. 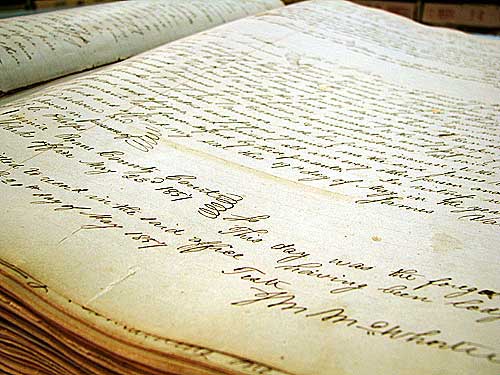 And then we went across the street to the thrift store, where I bought nothing but enjoyed looking around at the cast-off excess of our not-so-frugal modern society, and on to my outing’s destination (the tax man). Eventually I waded my way back up our snowy driveway home. To my little farm. Where I belong.

And I wondered if I really want the roads to dry up and spring to come, after all. The world–old and new–can be a very strange place.

P.S. I did not say that! SPRING, PLEASE COME!