My blog is featured this week in a column in an arts newspaper called Graffiti (“West Virginia’s news alternative”). I’m not sure if the column is on their website (I couldn’t find it there) but you can find the site here if you want to take a look, or if you live in West Virginia, you can pick up a copy. The columnist, Bryan Stealey, calls Chickens in the Road one of the best blogs he’s ever read and then goes on to say a bunch of other really nice stuff. I may throw myself off a cliff now because I can’t possibly live up to such praise, so if I disappear, that’s why. In further news, yesterday I was interviewed about my blog by a reporter from the Charleston Daily Mail, one of the largest newspapers in the state. The last time I was interviewed by a reporter (for an article that appeared in the local county paper), it was February and icy and I was afraid to drive up my own driveway. Then I fell off a chair at the beginning of the interview. This interview was conducted over the phone, so I was feeling really confident that if I fell off my chair, at least she wouldn’t know. The interview was scheduled for 10 am on Thursday, so I was stunned when she called at 10 am on Wednesday. Polite person that I am, I didn’t point out to her that she was calling a day early, which was a good thing since it turns out yesterday was actually Thursday. Which apparently follows Wednesday, which follows Tuesday, and so on. Hunh. I’m not sure when the article will be in the paper, but I’ll let you know and if it’s online, I’ll post a link.

When I told 52 about the interview with the reporter from the Charleston Daily Mail, well aware of my penchant for running around in my undies, his immediate comment was: “You won’t even have to put pants on!” Unfortunately, he didn’t think to go over the days of the week with me despite the fact that he is also well aware of my non-existent relationship with the calendar.

So if you’re new here because you’re visiting after reading about this blog in Graffiti, that right there tells you all you need to know about me. I’m not wearing pants and I don’t know what day it is.

The reporter asked for a photo of me, and since I’m the one who takes all the pictures around here, they’re pretty scarce. Which means I need to get someone to take one. I thought about trying to get her to take this one from last December, which is one of only a handful of pictures that have been taken of me in the past year, but I suspect it’s not appropriate. 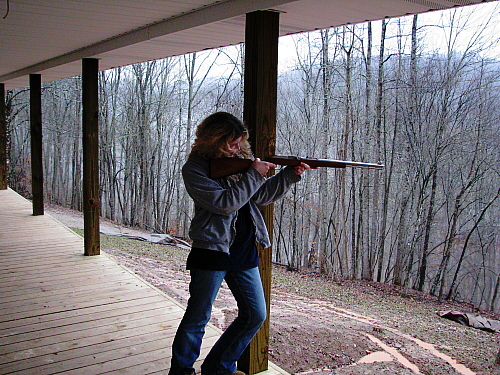 But look, I had my pants on and everything!!!