The satellite TV guy came out. He said, “You’ve got a problem.”

Man, I hate those words. I like what Steve-the-Builder always says. “That ain’t no problem.” Or, if I’m asking him about water running in the house, he says, “It’s real close.” The only bad thing I can say about Steve-the-Builder is not really a bad thing. He’s a perfectionist. So I know when he takes a little bit longer to do something, it’s because he’s doing it right. When the Gutter Guy got here, he took a look at the roof and said, “That’s the best metal roofing job I’ve ever seen.” That’s what everyone says, about various things, who comes out here. Then they find out he built nearly the whole thing by himself, with only his family to help him, and their jaws drop. (Steve-the-Builder hired out only a few jobs, like the cement block work, the drywall, and the gutters.) The satellite TV guy looked at the wiring setup and said, “This is perfect. No one ever has it perfect, but this is.”

Then he said, “You’ve got a problem.” 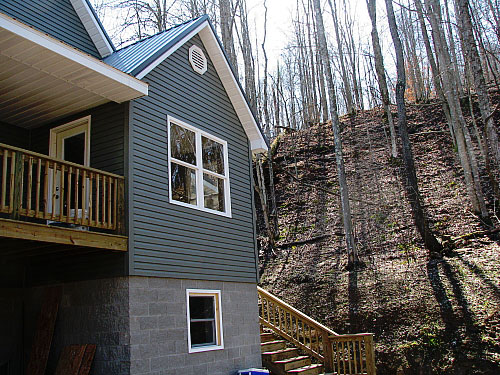 We can’t get local channels. We can get all the other satellite channels, but not the local ones. They’re on a different satellite that sits lower. He said we’d have to cut a swath of trees down off our hill to get local channels. I had an urge to go get Steve-the-Builder and tell him to put his Superman cape on and go pluck those trees out of the ground with his bionic pinkie (because we know he could do that), but that seemed a little rash. I like the trees. I also like Judge Judy and Desperate Housewives and American Idol. I guess we’ll see how we feel about it in a few months. The kids really don’t watch the local channels, and I don’t watch them much, either. Thank goodness I can still have my HGTV.

And I have water running in the house. Here is Steve-the-Builder (with one of his sons) finishing the final touches on the water heater, just before he turned water on in the house yesterday. He said, “I’ll get water in your kitchen tonight.”

I said, “What about the bathrooms?”

He said, “You want it in the bathrooms first?” 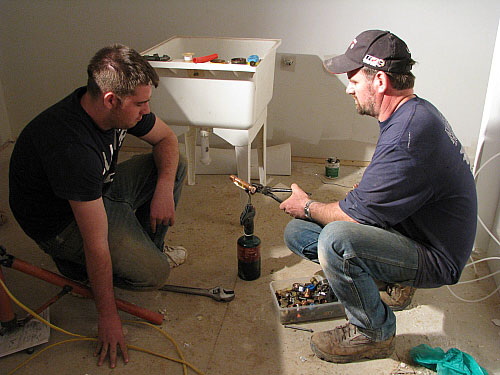 Men. Once we got that priority cleared up, he focused properly and got water where I wanted it.