Morgan, jumping fully clothed into the old swimming hole in the Pocatalico River between John Morgan Dye’s old farm and our new farm. 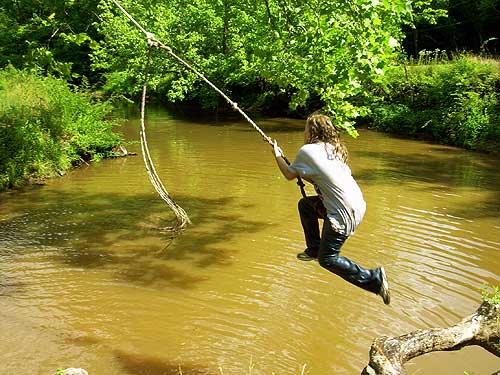 Note: The following was part of Morgan’s social studies project that won Honorable Mention at the 2007 West Virginia State Social Studies Fair. I’m posting it now in conjunction with my column in the Charleston Daily Mail on Monday and also as part of an Old Stringtown history section I will be unveiling on my site tomorrow.

Where Did I Get My Name?
by Morgan McMinn

My great-great-great-grandfather, Abraham Dye, came from Russell County, Virginia, to what is now Roane County in a wagon and built a log cabin on the Pocatalico River. He had a son named John Morgan Dye.

John Morgan Dye married Florinda Farnsworth Smith and they had nine children. After they married, he bought a farm in Stringtown (near Walton) and lived there the rest of his life. One of his children was Romeo Napoleon Dye. Romeo was my great-grandfather. He died of pneumonia when he was only 29 years old. My grandfather, Ross Winton Dye, was only four years old when his father died. My grandfather lived with his mother and two little brothers in a house on John Morgan Dye’s farm. John Morgan Dye died in 1945.

My grandfather had four children, and one of them is my mother. When I was born, my grandfather suggested that I be named Morgan after my great-great-grandfather, John Morgan Dye–and that is how I got my name.

Ross Dye: He was very nice. He had a great sense of humor about things. When asked his age, he would say, I am as old as West Virginia. He was born July 29, 1863, thirty-nine days after West Virginia became a state. I could write a book on the humorous things he said and did.

Ross Dye: His father, Abraham Dye, was a very loving man. Aunt Oshial and Aunt Ruby told me about sitting on his lap and combing his long beard. He dearly loved his grandchildren just like I do.

How long did John Morgan Dye live in Stringtown?

Ross Dye: When John Morgan Dye and Florinda Farnsworth Smith were married, they went to what was formerly known as Shambling’s Mill because of a mill on the Pocatalico to grind grain. It was powered by water and was behind John and Florinda’s house. It was later called Stringtown when the oil boom started in the early 20th century. They lived there until they died. Grandma Florinda died in 1940 and Grandpa John in 1945.

What did he do for a living?

Ross Dye: Grandpa was a farmer. He profited greatly by the oil boom and bought more land, increasing his farms to 400 acres. He owned a large business building on the square in Spencer and houses and lots in various towns in West Virginia. He also owned property in Florida.

What was his favorite food?

Ross Dye: His favorite food was steak, cured ham, and lots of fruits and vegetables. He liked it all. They always had what they called a “hired girl” or more when needed so they canned and they had fruits and vegetables the year round from their garden. Just as soon as the “hired man” plowed the garden in the spring, Grandpa would send him up the road to plow our garden, too. He was very good to us in every way.

Did he have a favorite color?

Ross Dye: His favorite color was dark gray or black for his suits. He liked red for Grandma. He preferred blue cars.

What is your favorite memory of him?

Ross Dye: My father died when I was 4 1/2 years old. They brought him in his casket to be in Grandpa’s parlor. That was the usual thing to do in those days. I walked in the parlor to view my dad alone and only another lady and Aunt Oshial were there. I was by myself. Aunt Oshial said, “Ross, would you like for me to hold you up so you can see better?” I told her, yes. When she put me down, I walked out to the front porch. Just outside the door was Grandpa. He squatted down to be on my level and said, “I’ll be your daddy now.” He truly was. As I was growing up, he went to father/son banquets and all sorts of things a dad would have done. I think of that all the time and I marvel that he never failed me. I was 20 when he died and had just come home from the war overseas. They gave us one call when we landed on the East Coast and my call was to Grandpa. When arriving home, I went straight to Spencer to have lunch with Grandpa. He was spending some time with Uncle Lote. We had a good visit and he died in his sleep that night. It seemed to all of us that he was just making himself hold on until I returned from finishing my missions with the 15th Air Force and got home.

Did he like to watch TV? What was his favorite show?

Ross Dye: There was no TV until a few years after World War II. He listened to the radio every day. He seldom missed Lowell Thomas, who was a famous newscaster.

What kind of farm animals did he have?

Ross Dye: He had Jersey cows for milk and Herefords to sell for beef. He also had chickens, hogs, and horses. His cattle were his favorite farm animals.

How long was he married?

Ross Dye: Grandpa and Grandma had a wonderful, loving marriage of 56 years when she died. He lived five more years, but he never seemed as well and energetic after she died. Incidentally, because her name was so long, she always signed her business papers F.F. Dye.

Did you and John Morgan Dye ever throw a football? What kind of games did he like?

Ross Dye: No, I don’t think we did. I wasn’t interested in sports at school. I went to both State and National speaking contests and all kinds of Vo-Ag things. I was an officer in the FFA and went to Jackson’s Mill when they had meetings over there. I was class president of both my junior and senior high school classes, so I didn’t really have time for sports for Grandpa to help me with. When all of their children came home, they’d play baseball or horseshoes or whatever. He liked all kinds of games.

Was he a good grandfather?

Ross Dye: He was a super grandfather and he was my father, too.

Did he have a dog? If he did, what was his dog’s name?

Ross Dye: I think my dog was enough for him–my dog’s name was Collie, and Grandpa enjoyed him and all of his animals.

Ross Dye: Farming and his family was fun for him. He could have sat on his front porch and done nothing, but with all his oil money and properties, he still kept his hand in the working of the farms.

Did he ever go on vacation? If he did, where did he go? Did he ever travel outside West Virginia?

Ross Dye: He enjoyed visiting his children. Uncle Smith lived in Kentucky a few years and later in Ohio and Grandpa enjoyed a bit of travelling to see him, but West Virginia was his place. His children lived in different towns in West Virginia and he enjoyed short trips to see them.

Did he like music? If he did, what kind?

Ross Dye: Grandpa liked hymns sung by groups on the radio. He also liked patriotic music and classical music, all of which he could hear on the radio. He was an avid reader of daily newspapers. From fall til spring, his year-round farm man would feed the animals and tend to things outside, so Grandpa read many books during that time.

What would he think about me doing a project about him?

Ross Dye: I think he would feel honored that his great-great-granddaughter, named after him, would do a project about him. I was special to him for he was a father to me. You would be special, too, I am very sure of that! 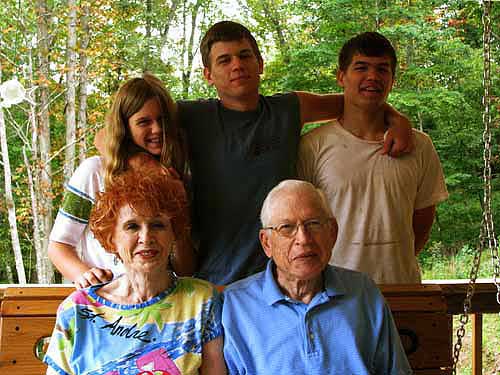 (Back: My kids, from L to R, Morgan, Ross, Weston. Front: My parents, Norma and Ross Dye. Picture taken during a 2008 visit to our new farm in Stringtown across the river from John Morgan Dye’s old farm.)