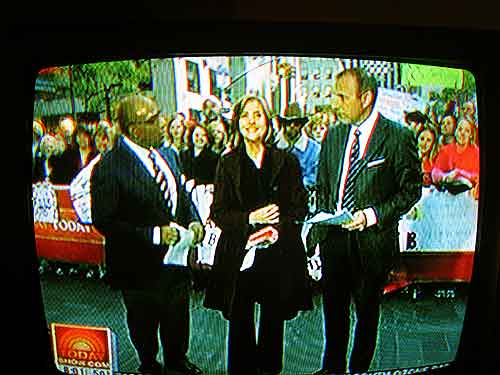 Network television!!!!! In my house! One more battle won against adversity in the boonies! If you were reading this blog back in March when we moved in, you might remember the entire series of obstacles involved, from finding water to getting television reception. Surrounded by hills, an hour from the nearest city, there is no way to get TV here other than by satellite. (No cable. No DSL. No “rabbit ear” reception.) We had two different satellite companies out here. Both told us the same sad story–local network television is sent on a lower satellite than “cable” satellite channels. The hill behind our house prevents reception from that lower satellite. We were able to connect to the higher satellite, receiving channels like CNN, TLC, HGTV, etc. But no ABC, NBC, CBS, or Fox. Unless we wanted to cut down a swath of trees off the hillside behind our house. While I have been interested in cutting down a select handful of trees in front of our house to improve our view, cutting down a swath of trees from the hill behind the house was not in my dreams.

If you live in an area where local network reception is unavailable for geographic reasons, you can apply to your “local” networks for a waiver to allow you to receive satellite network channels from either Los Angeles or New York. These channels–Fox, ABCE(east) or ABCW(west), CBSE or CBSW, NBCE or NBCW are carried on that higher satellite along with other “cable” satellite channels like HGTV and CNN. But your “local” networks (for us, that means the network stations in Charleston) have to agree and give you a waiver. The way they see it, if you receive your network channels out of New York or Los Angeles, they are losing the advertising dollars that come with their viewership numbers to their local stations. Our waiver request was denied, and so for seven months I’ve been watching a lot of HGTV, CNN, or nothing at all.

However! They had a change of heart. Or something. Who knows. Seven months later….. we have satellite networks from New York! Desperate Housewives, Good Morning, America, Today, Oprah, Boston Legal, and American Idol, oh how I have missed you! JUDGE JUUUUUUUUU-DYYYYYYYY! I love Judge Judy! I’m going to have her talk to Clover.

I will also be completely up-to-date on all the local weather and news in New York City, so if you’re wondering how things are going in the Big Apple, just holler. And, I know nothing about this season’s new network TV shows. Anything good? Tell me what you watch! I have network TV! Just in time for cold weather and TV-watching time. I need recommendations!