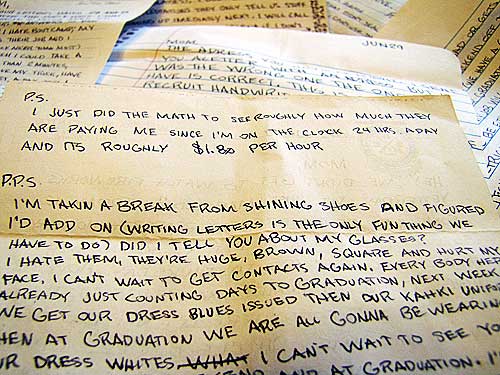 I didn’t expect to get much in the way of letters from Ross. He wasn’t a letter writer before he went to boot camp. In fact, I’ve never gotten a letter from Ross in my life. Even when he was in Texas for the last six months before he came back here to get ready to leave for boot camp. I think he called three times. He emailed me another handful of times. (He’s not much of an emailer, either.)

There’s nothing like boot camp to make a boy love his mama. His letters are entertaining. Sometimes hilarious. Filled with hard details, few complaints, and an underscore of determination. They make a fascinating look into what real life inside real boot camp is really like. I’m so proud of him. And I love his letters! At first I was only writing him every other day, thinking he’d tire of constant letters. Now I write to him every single day, without fail. I tuck in with the letters various things that he’s allowed to have–a phone card (I’m ever hopeful!), stamps, extra envelopes, and various clippings–comic strips, newspaper articles, puzzles, and jokes.

I save all his letters. Carry them around in my purse. Read them over and over. I suspect that when boot camp is over and he has phone and internet access again, things will go back to how they were before, so I’m cherishing this boot camp time while I have it! It will probably be the only time in his life that Ross will want (and nearly beg for) letters from his mother every day. And even WRITE ME BACK.


*
The day I got here, we came in around 2100 and they yelled and screamed and cussed us all night. We were all pretty much shell-shocked. The way they acted is kinda funny to me now. When we finally got to the compartment, it was 0430. They let us sleep for 5 minutes then got us up again.
*
I got so many shots, I lost count. I couldn’t sit down for three days after the butt shot.
*
I have been trying very hard to be invisible. The RDCs [Recruit Division Commanders] don’t know my name and I like it that way. They are mean, but I’m starting to see the purpose.
*
We can’t talk at any time for any reason and I’m starting to get really mad at people who won’t shut up and we have to pay for them with everyone else.
*
I hate boot camp.
*
My RDCs are mean, but it’s their job and I respect them.
*
I wish I could take a shower by myself for more than 2 minutes, have my cell phone, sleep in, have my truck, eat McDonald’s, and get a day off. I miss you.
*
Boot camp is stressful. It’s not like on TV. I mean it is, but on TV all they do is work out and do drills and train. They don’t show you that you have to take tests and prepare for inspections. We have to make our own time to study, like cutting into our 6 hours of sleep and eating with one hand and holding our book in the other. We get from 0700 to 1300 on Sundays to do what we want, but that’s also the only time we have to shine our boots and iron our clothes. I’ve been sneaking in writing after taps.
*
The first thing I want to do after boot camp is eat some good food.
*
We lost one guy because he punched another recruit. Two guys quit and one guy from the division across the hall deserted, just ran away in the middle of the night.
*
I can now make a flotation device out of a set of coveralls while I’m in the water and wearing them in about 3 seconds.
*
I hurt my foot but I haven’t told anyone because I’ll miss training so during the PFA I did 75 pushups in 2 minutes (only needed 46), 79 situps (only needed like 50) then I ran a mile and a half on one foot in 12:40.
*
I wish I could have windows I could see out of. The windows in our compartment have a white cover so they let light in but you can’t see out of them.
*
Mail call is the most exciting part of my day.
*
We just got told at 1400 we are all gonna get beat because one of the guys decided to sneak a cookie into his rack and got caught so now we all gotta pay for it. If we are lucky they’ll let us watch fireworks today, but the way this day has started, I doubt it.
*
We didn’t get to watch fireworks yesterday. We just marched.
*
I’ve decided I hate marching.
*
We’ve all been talking about back home. Everybody’s homesick. We have so much to study, we always have a book in our hands. Keep writing me. I’m always excited about mail. Most of the guys don’t get any and they’re always jealous.
*
I just did the math to see how much they’re paying me since I’m on the clock 24 hours a day and it’s roughly $1.80 per hour.
*
Did I tell you about my glasses? They’re huge, brown, square, and hurt my face. I can’t wait to get contacts again.
*
Everybody here is already just counting the days to graduation.
*
Write me back. I love getting letters so don’t be afraid to write me as much as you want.
*
I’m always tired and everyone is fighting sleep. Boot camp is getting better. The physical stuff doesn’t really bother me anymore. They can’t really hurt me now. I think the hardest part is getting homesick. There’s not a single person here who doesn’t want to go home.
*
Today they got us all at attention and were asking us questions. If you got one wrong, you had to do 8 count body builders. I got mine right and they still made me do it. Then they asked us to pick a number between 1 and 12 and of course you can never get that one right.
*
I can’t wait to see you at graduation.
*

The dates on his letters are always way, way behind from when I get them. This is the last 2 weeks worth of letters. I usually get a batch on Fridays–they can receive mail every day, but are only allowed to mail letters on Sundays. So tomorrow I will get more letters.