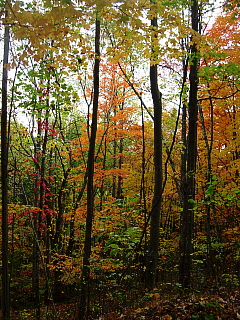 People are SO fascinated with our house. It’s the most exciting thing that’s happened in the boonies since, well, maybe forever. It’s a new house! Look at how they made that bridge across the creek to put in a driveway! Who knew there was that much room to put a house on top of that hill! And it’s THAT ROMANCE WRITER! People come from miles around so often to gawk, the builder has to lock the gate some days to keep them out. So then they slow down on the road and look up through the trees. They even sit on the hill across the river with BINOCULARS.

So yesterday the electrical inspector called. He was going to inspect our electric and he was lost. I said, “Where are you?”

He said he had gone past where the hard road stopped and then it had turned to hard road again and eventually, after a few questions, I figured out exactly where he was. Which was like three miles past the river crossing where he should have turned off to our farm. Only, you know, he didn’t see that because it’s a RIVER. Like, not a bridge, a RIVER. You have to drive through the river to get there. I know, this is shocking. It’s kinda fun, actually. The bottom of the river is rock, so this isn’t as bad as it sounds…. And you could always go out the other way where all you have to do is drive through a couple creeks. But that was a long, long way around from where the electrical inspector was at this point.

Anyway, he said, “How do I get to your house from here?”

I thought, hmmm…… If I was talking to anyone who knew anything about that road, I’d tell them to go back past the guy who has the turkey and a mean goat but not so far as the old one-room schoolhouse and ford the river on the left and the house is RIGHT THERE. But I kinda had an idea that that wouldn’t mean anything to him and it might make him run screaming back to the city if I pointed out that he had to drive through a river. People are so strange–they don’t react well to that kind of information.

So I said, “You know what? I’ll be right there.” I drove out there, rolled down my window and he said, “The map doesn’t show this road even going to your road.” I said, “Yes, it does. It’s just kinda like an adventure.” He said, “What do you mean?” I said, “Don’t worry about it. Just follow me!” He did and he survived and he didn’t even complain.

He just had one thing to say. “I hear you’re a ROMANCE WRITER……”

I feel so exotic here.