HRH Morgan Leigh (Her Royal Highness, another of her nicknames–Leigh is her middle name) was supposed to go to the WVU football game Saturday night with my cousins. I dropped her off over at the old farmhouse and by the time they were ready to go, it was snowing and they decided that driving further north to Morgantown for even more snow was not a good idea, especially since driving back at 2 am was on the agenda. Originally, Weston (15) was supposed to go since he is, after all, the football player in the family. He took a look at the weather forecast, contemplated hours in freezing stands, and declared magnanimously, “I will allow Morgan to go.” And so Morgan was “stuck” with my cousins until Monday since our backroad became impassable. Of course, if Weston had gone, he would have walked home way before then. The Princess, on the other hand, has to be coerced to walk across the room, so she stayed put, enduring the hardships of Georgia’s house, which include short order cook service, TV, and constant supervision of whether or not she is wearing a hat if she steps outside.

Meanwhile, Ross (17) got stuck in town because he’d gone to work at McDonald’s and couldn’t come home. He stayed at his girlfriend’s house. (Her mother was there!)

52, who had come to finish work on the well, was stuck with me, and Weston enjoyed his mastery of his domain as the only child in the house–which, for a middle child, is paradise indeed.

The chickens got cold feet and spent most of the weekend inside the hen house. 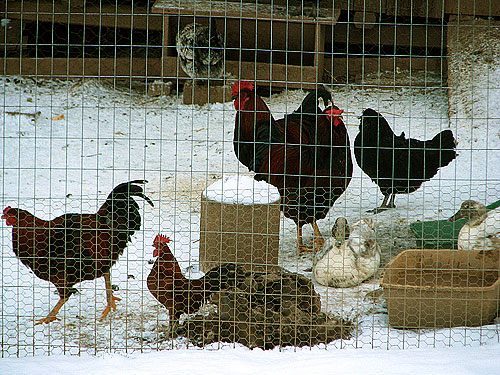 Clover spent most of the weekend complaining because she went into heat right before it snowed. Before I could set up a hot date to knock her up, we were snowbound and she lamented, loudly, of her lost lover. She wrote long, sobbing, romantic poems in the snow and snapped at Honey and Nutmeg when they looked at her wrong. 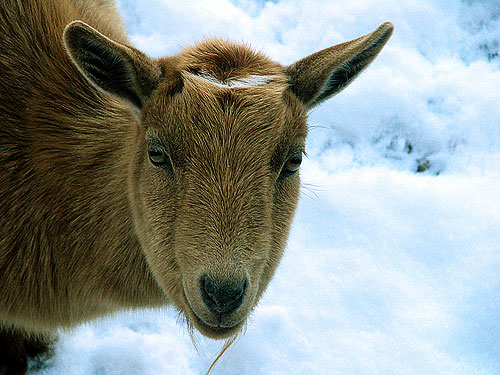 Coco rejoiced in the ridiculousness of all this white stuff. She bounced and cavorted and carried sticks. 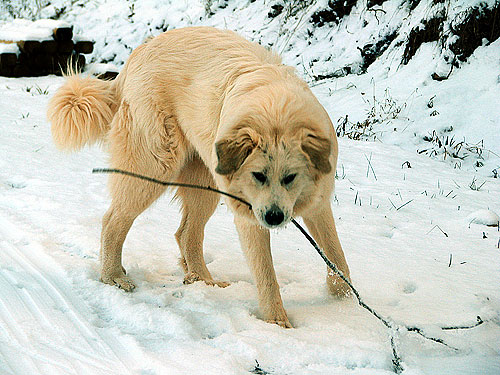 Hmm. You don’t look so white now, do ya, Giant Puppy? 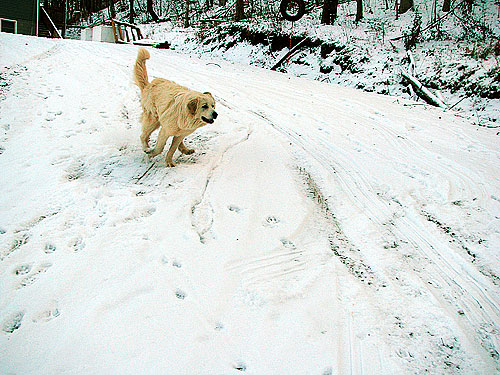 She had a great time playing with Dookie. 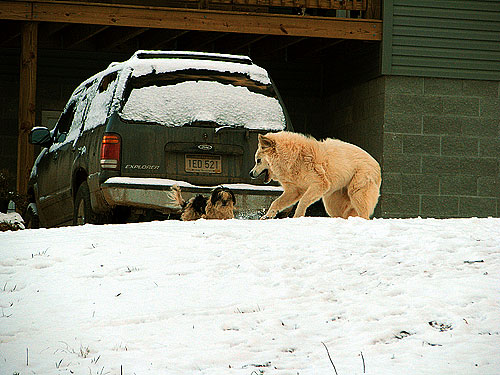 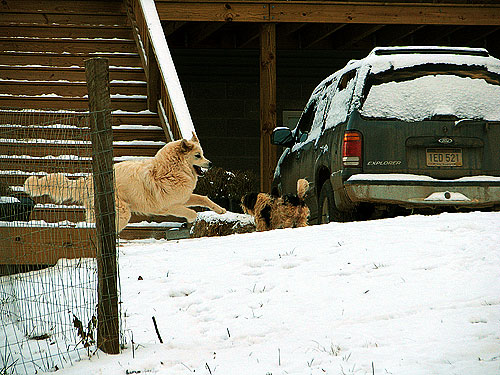 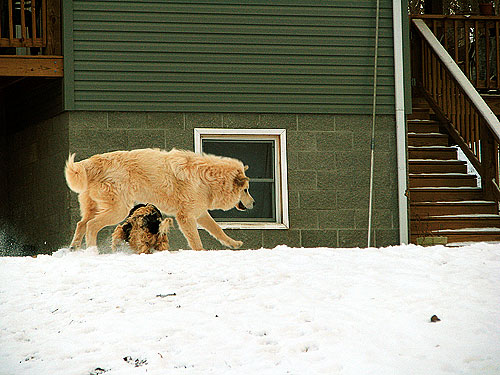 Have you noticed my license plate yet? 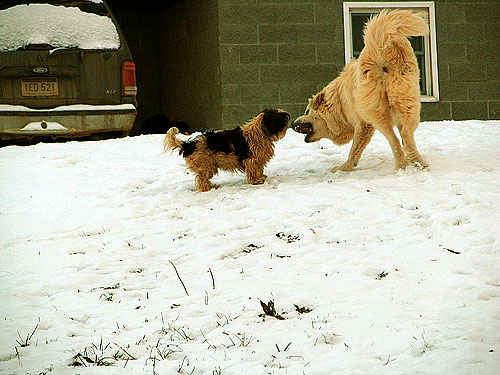 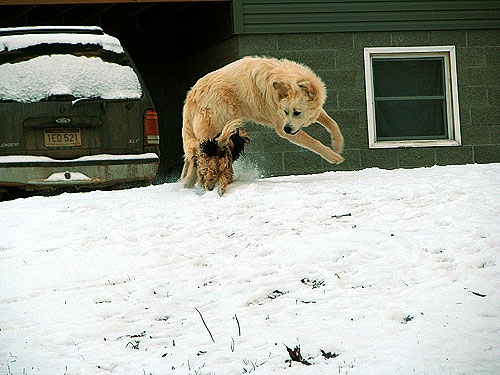 That’s not a specialty plate or anything. That’s just the plate the DMV gave me. 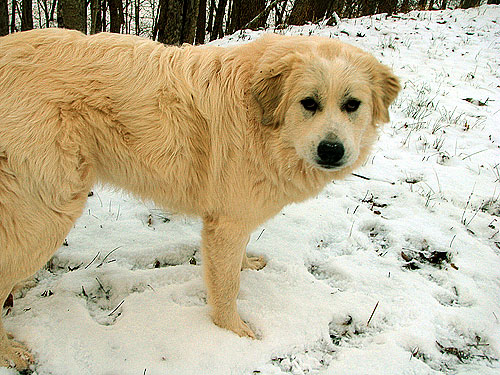 Coco and I think this is an amazing coincidence.

Meanwhile, back in our snowed in weekend, 52 and I, in some kind of lunatic replacement therapy for the missing children, decided to get out the sled and go down the very long, very steep driveway together. Let me tell you, this is one wicked sled ride. It’s the scariest sled ride I’ve ever had in my life and there was a lot of screaming involved. And I’m not just talking about 52. (Just kidding! He is very manly and he did not scream. I screamed for both of us.) Then I talked him into doing it a second time. Then because it was so scary, I got Weston to go down the driveway on the sled. 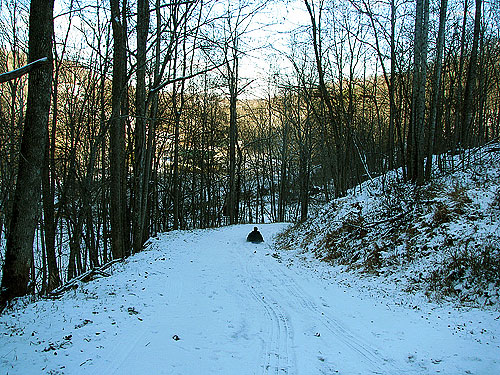 He came back after one time, said I was trying to kill him, and refused to go again. I TOLD YOU IT WAS SCARY!! HE IS A FOOTBALL PLAYER!! 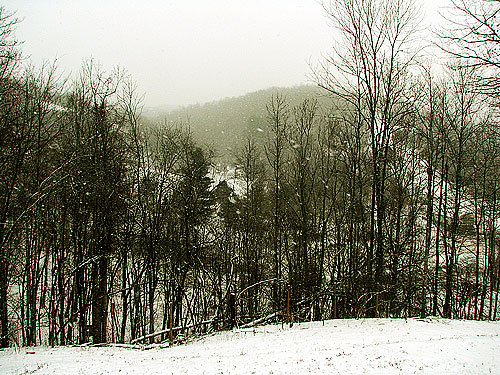 We had food. We had water. We had heat. We had fun. It was beautiful. And come Monday, the state road people finally remembered us poor people in the sticks and put down cinders on the road and slowly, very slowly, we got out. Children came home. 52 drove away. I baked cookies and bread and contemplated the likelihood of getting fired from any job I might take in town because at any given time our road may become impassable for days. (It doesn’t take much snow to get snowed in here. I noticed it took the state road two days to bring help to our boonies backroad. And when that narrow boonies backroad is flanked by steep drop-offs, sliding off is not a welcome thought.)

I believe I shall simply plant a money tree out front……..!!

(Okay, okay, truth–I was awed by your many wonderful, creative suggestions and I am pursuing several possibilities. I’ll let you know when I get it figured out. Thank you SO much for the generous ideas and encouragement!)