….there stood a tiny church that served the then-booming community along the Pocatalico River called Stringtown after the strings of pipe used in gas and oil production. Gas and oil wells, towering derricks and boiler tanks, still dot the countryside, rusting remainders of the fortunes made here in the late nineteenth century.

We have our own old derrick up on the hill standing not far from our house site. Oil and gas production largely moved away as the twentieth century progressed, as did the population. Even by my father’s day, the hotel, stores, post office and gasoline plant in Stringtown were gone, but the farmers like my great-grandfather who’d profited from the mineral rights on their lands still kept the community bustling until the sons and grandsons grew up, went to war, and moved on to the new suburban landscape beyond these rural hills.

But down in our green, green meadow there are still stone steps, a crumbling memory of the church and tight-knit community that once existed here. Our farm, with the church that also served as a school for many years, was the center of that community. 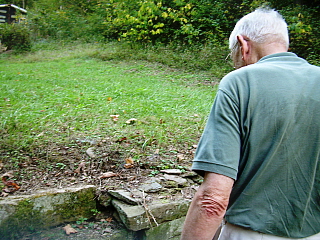 My grandmother taught at the one-room Stringtown school for many years. My father went to school in the old church in first grade then on through eighth grade at the new school that was built across the river in 1931. Throughout his childhood, he went to church here.

Here, my dad is checking out the old stone steps of his childhood. He grew up just across the river on my great-grandfather’s farm. Did I mention the parental units are visiting this week?

Here is the old church that stood on our farm as it appeared before it burned down about ten years ago. 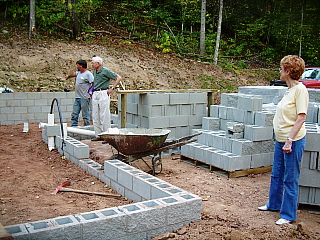 From the past to the future……. Here, my parents are inspecting the progress on our new house on the hill.

Stringtown rises again…. I think I am going to run for sheriff. I want a long black duster and silver pistols and a big hat. Possums and squirrels will scatter in my wake.