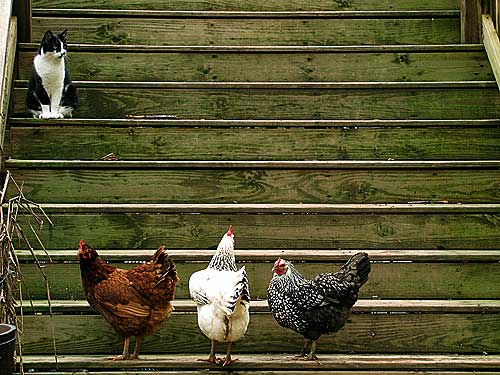 My porch steps could use a good power-washing. Not sure that will do a thing to clean off the chickens, though.

It’s the most wonderful time of the year!

There’s a Christmas song like that. I think that song is wrong. The most wonderful time of the year is May! Beautiful weather. Green bursting forth everywhere. Wildflowers springing up along the banks. Sun shining. Birds singing. Seeds going into the ground in an annual rite of faith that Nature will provide for us if only we will believe.

May also marks the one year anniversary of the launch of Farm Bell Recipes. I’m very excited about that (giveaways! go see!). Farm Bell Recipes is my baby, just like Chickens in the Road is my halfway grown up baby. CITR is three and a half years old this month. Where has the time gone? Sometimes I wonder what my life would be like if I hadn’t started CITR. Only…. I can’t imagine.

Recently, a thread sprang up on the Chickens in the Road forum called Things I’ve Learned from CITR. Here’s JeannieB’s list:

More canning and buying all associated stuff-thanks to DeeDee, CindyP and Suzanne and many others

Soap-thanks to CindyP and Suzanne, finally got the nerve to face lye

What I want to do:

more dehydrating and learning to use my embroidery machine

You know what is the most beautiful thing about this list? SHE DIDN’T LEARN ALL THAT STUFF FROM ME. And in fact, I have learned many things from all of you–and been inspired to learn more and adventure more because it’s such a joy to share it all with you. I’m inspired, every day, by all of you. Thank you so much for being here. The community here is awesome.

On a related note, as this (and any) website grows, there are mostly good but sometimes a few negative side effects. One concern has been noted repeatedly in the past few months, and I want to open it up for discussion here. This is your community. I’m very open with my comments section. There are some big websites where every single even slightly negative comment is deleted. I rarely delete a comment. I delete comments if they attack another commenter or if the commenter has proven a regular, longstanding pattern of attacking me. (I generally allow people to attack me a number of times, LOL, before deciding that attacking me is all they are here for.) But recently, along with some commenters who apparently read regularly but still want to know if I care about my animals, there has been a rise in what I call “drop-in attackers” who leave first-time comments like this one on my Stirred-Curd Cheddar post:

Dear sue p, you left out the part where I eat bon bons on the couch the rest of the time!

A few days ago, a first-time commenter named “dink” left this comment: “Tuff life eating out.” That was on my post about seafood in South Carolina. Maybe that was dink’s first visit and he/she doesn’t realize that I can count on one hand the number of times I’ve eaten at a restaurant (including fast food restaurants) in the entire past year and that I make all of our food from scratch every single day, all the way down to growing it, canning it, and milking a cow, and that I wash loads of dishes two and sometimes three times a day. (NOT complaining! I love my life and I am so lucky, and double-lucky that I could take my kids on that trip, a trip I saved for and paid for myself and the first real vacation we’ve taken in six years.) Both dink and sue can’t spell tough and they both seem concerned with my laziness, so maybe they are even the same person!

Anyway, I left sue p’s comment, in line with my usual stance on negative commenters, but I deleted dink’s, which is out of the norm for me. After all, that was dink’s first time slamming on me. Doesn’t dink deserve another chance? I think I just felt a little worn out on rude comments, and I realized that is what some of you have been expressing, too. (And dink’s and sue p’s comments weren’t even THAT rude, just sort of snide. As many of you who read the comments section know, there have been much more insulting comments than that in recent months. If you haven’t seen those, go here for a taste.)

By the way, I also leave every negative comment on my recipes (of which there aren’t that many), except in special circumstances where I feel the commenter is not being truthful about their experience with the recipe. For example, I deleted a comment on my very popular Homemade Hamburger Helper post last week. The commenter stated that they had tried the recipe three times and every time it was so bad that even their dog wouldn’t eat it. I made the judgment call that if they thought the recipe was so bad after the first time that even their dog wouldn’t eat it, they wouldn’t have made it TWO MORE TIMES. (I mean, seriously….. I had to laugh at that one. And then I deleted it because it just brought nothing useful to the conversation about the recipe.)

Not all negative comments are funny, though, and while I like to think I have a thick skin, I am beginning to find some of the negative comments to be in conflict with the purpose of this website. The purpose of this website is to inspire, entertain, inform, and encourage. Some people don’t like me. That’s okay, though not specifically relevant to the purpose of this website, which begs the question–to what extent do I have a duty to protect the environment and prevent those people from causing a disruption for others? There are some websites that thrive on conflict in the comments. Readers go to those websites looking for that, and expecting that. I don’t believe that this website is one of them. I believe people come here looking for a soft place to land.

I also realize that I’m starting to moderate myself more than I like. This blog is a story about a farm. Most of it is wonderful. Sometimes it’s not. This is a real farm and these are real farm animals. A few days ago, Carmen at Old House Kitchen left this comment: “Cute little one! Congrats! Our goat finally kidded. She had three but two (boys) died. We have a precious little doe named Pixie. She’s [a] little ball of fluffy wuffy-ness.”

And I felt very guilty because when I wrote the post about Clover’s new baby, while I never said she only had one baby, I never said that she had two, either–but she did. The second one died shortly after it was born. To leave that out is not fair to the readers here who experience these same types of losses and it may create an atmosphere in which people wonder why they can’t have a “perfect” farm like mine where every animal is born whole and healthy. I left it out because I was tired of being insulted about my care for my animals. I don’t want to censor my stories–and I’m starting to do that because of the comments some stories may elicit and the disruption those comments create. Still, censoring difficult stories feels wrong to me, and I’m going to make a promise to myself and to you today that I’m not going to do that anymore. And that’s going to mean more negative comments.

Whether it has been at times altruistic and at other times selfish for me to have let negative comments stand in the past (and it’s probably a little of both), I don’t want to make the decision as to how to handle them going forward by myself. I want to include you.

This is a difficult issue that presents an ongoing struggle for me. I want to hear from you! Please let me know what you think.

NOTE: See an update to this post here. Thank you for your suggestions and your support!