52’s great-grandfather, Otto, after immigrating to the United States from Holland, founded a clock/jewelry shop on the square in Spencer, West Virginia. (Spencer is the seat of the county in which our farm is located.) He also operated as an itinerant clock/watch repairman throughout West Virginia, Ohio, and Kentucky. Over the past 200 years, no doubt my family and 52’s family ran across one another. Who knows, his great-grandfather may have at one time repaired my great-grandfather’s clock. Otto’s son and grandson (52’s father) continued to operate the shop on the square. 52 grew up in Spencer, his father running the jewelry shop, his mother a math teacher. I like to think I may have passed him sometime, 52 riding his bicycle around Spencer’s lazy small town streets, me riding in my parents’ car on the way to the Robey for our treat during summers when my father took us to West Virginia. 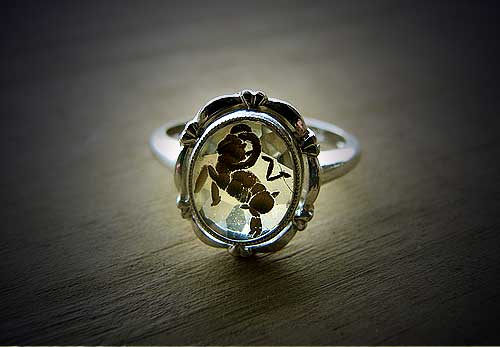 This ring 52 gave me for Christmas is significant on several levels. It’s a ring leftover from the stock of his father’s store. It represents the past–which is, at least in our imaginations, shared. My birthday is in April, and the ram is the astrological sign for Aries. So it represents me–as well as him since it comes from his father. And one of my dreams for the coming year is to start a flock of sheep here on our farm, so it represents the future. (And, well, like my license plate…. How coincidental is all of that?)

His parents died in a tragic automobile accident 26 years ago, ending three shop-keeping generations on the Spencer square. This vintage ring has waited a long time to be slipped on someone’s finger, showing–yet again–that the best gifts not only don’t have to cost anything, they don’t even have to be new.

(And no, it’s not an engagement ring! Get your minds out of the chapel, LOL.)