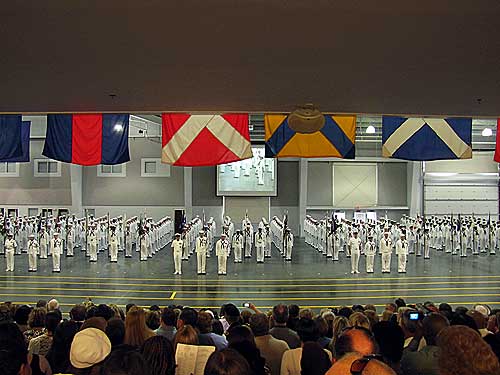 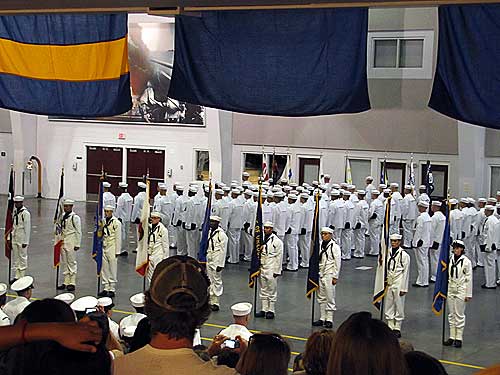 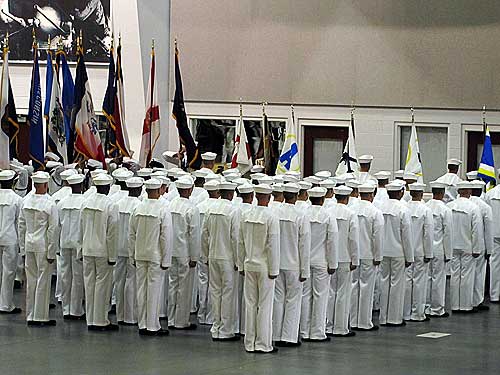 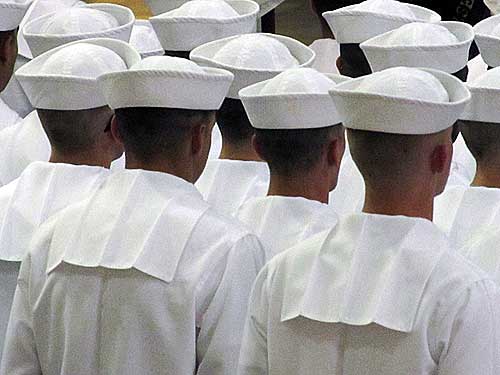 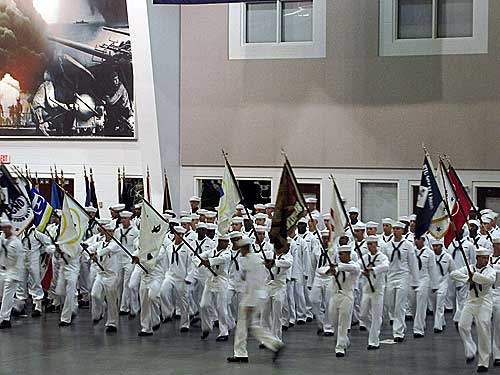 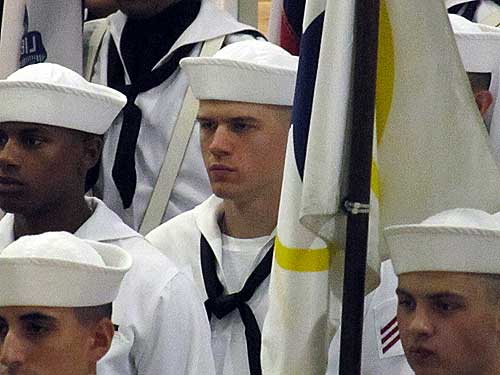 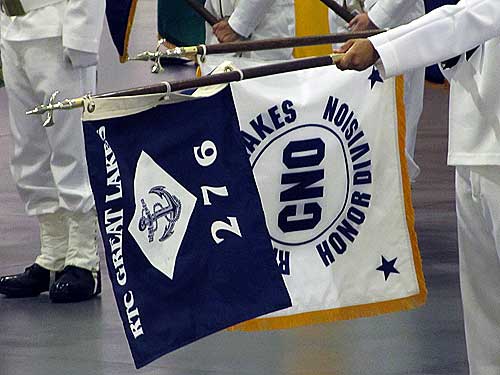 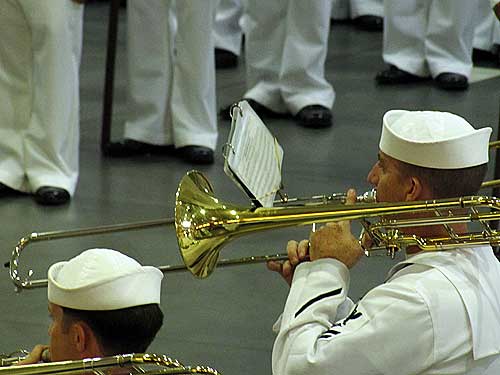 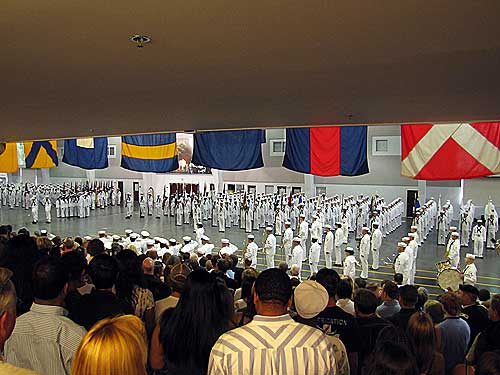 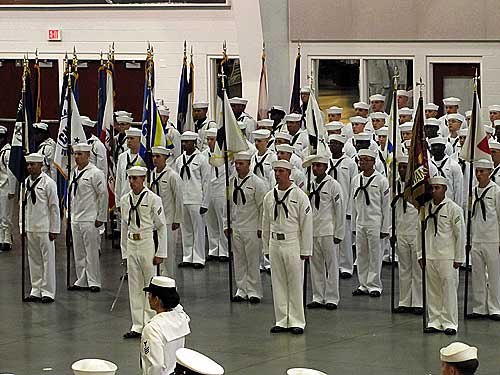 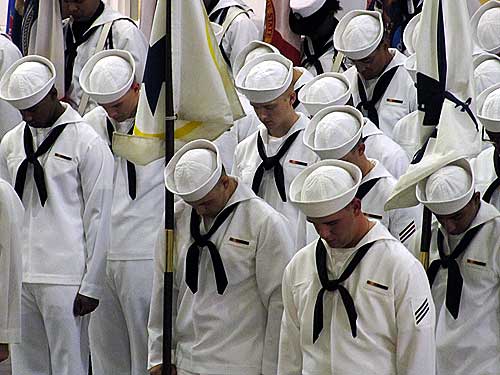 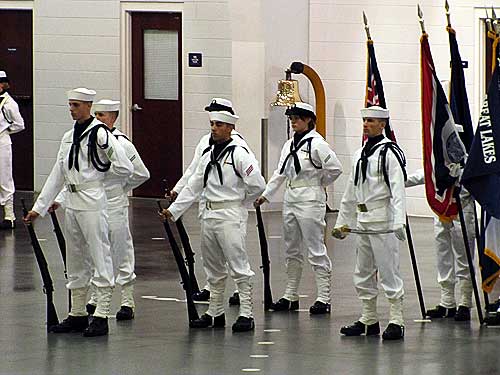 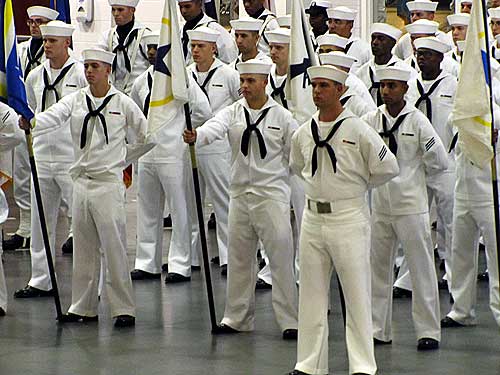 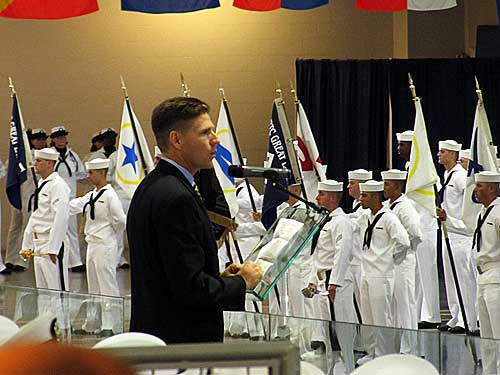 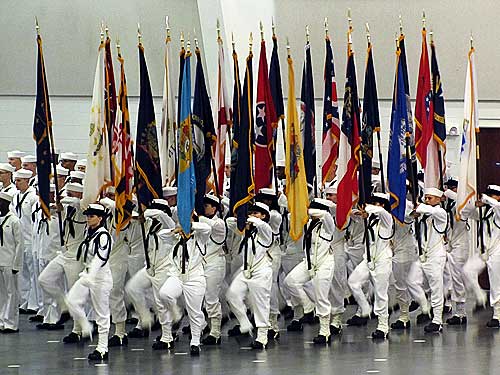 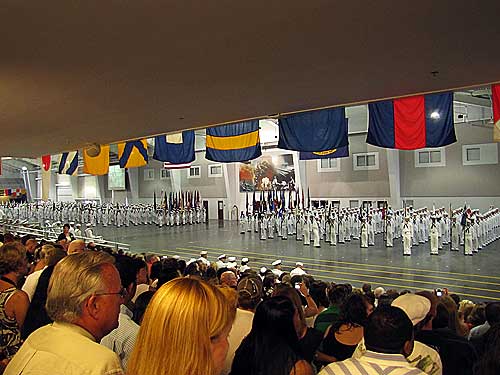 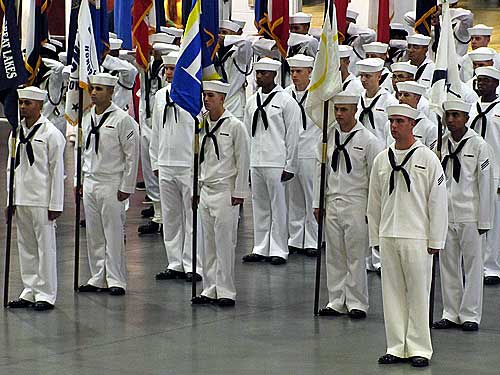 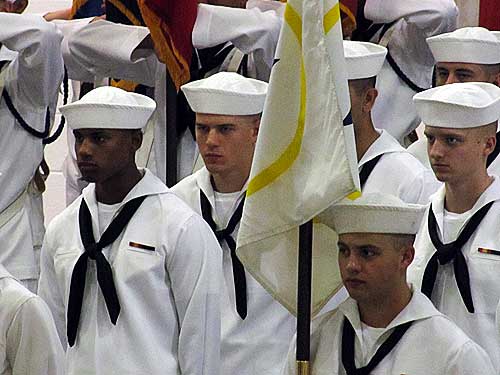 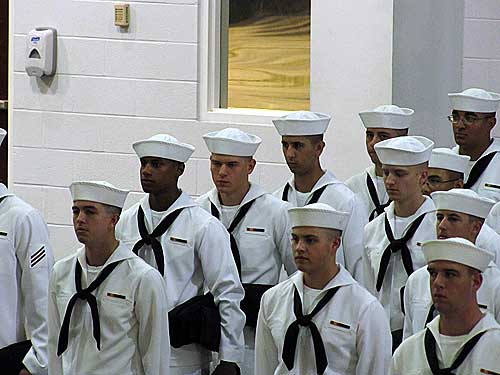 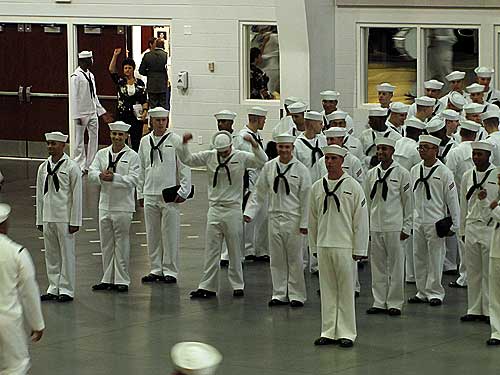 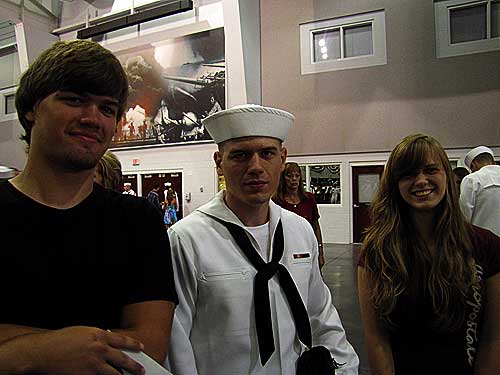 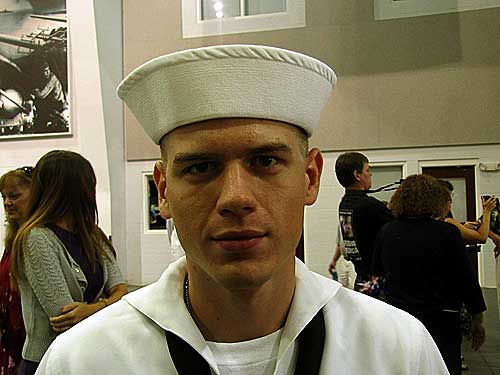 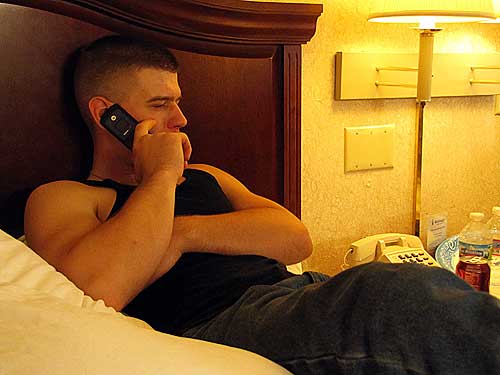 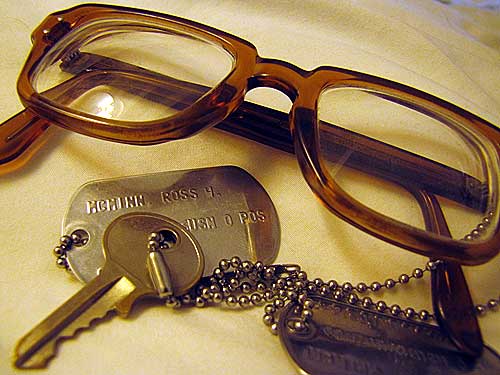 Those glasses will never see the light of day again.

If you ever have the chance to see a Navy boot camp graduation, go. The Navy knows how to put on a beautiful show. It was awe-inspiring from start to finish. The photos don’t really need much if any commentary. The speaker was Assistant Secretary of the Navy, Juan M. Garcia III. The performers (music and drill) in graduations are always junior recruits, who will be graduating in a few weeks. The stars are the graduates, of course. The way each division moves in formation as one is amazing. It was, quite simply, a thrill to see. And when it was finally over– The recruits are instructed to remain by their division flags while their families rush from the stands, sorting through the sea of white to find their own.

After battle stations, their final–grueling–test, there is an immediate capping ceremony. They remove their “recruit” caps and are given a “Navy” cap. They are fresh from their 12-hour ordeal and Ross said the speech by their commander was moving. Many of the recruits cried. They were told, this is your real graduation, the one in the big hall with the marching is for your families. That is very true, I’m sure. What we saw was their ceremonial graduation. Their real, emotional, gut-ripping graduation was the one after battle stations. But the ceremonial graduation comes with an extra perk–liberty! For Ross, he is one of the lucky ones to have all weekend. He won’t be leaving for his “A school” (nuclear power school) in South Carolina until early Tuesday morning.

The first thing he asked for was his contacts. Right then, right there! He was ready to put them on his eyeballs! Unfortunately, I hadn’t thought he would want them right there, right then, so they were back at the hotel. As soon as we got back to the hotel, that was the first thing he did–put his contacts in! And then he didn’t want to do another thing. No Chicago. No going out to eat. Nothing. After two months of regulated doing every hour of the day, he wanted nothing more than to spend the day hanging out in the hotel room with his family. He took a long shower. He changed into civilian clothes that I brought for him. (Which he can’t wear outside the hotel room–only in private.) We ordered pizza delivered to the hotel. He talked. And talked. And talked. And talked some more. He showed his brother and sister how to do 8-count body builders and mountain climbers and sharks, and how to march, and how to fold clothes. We talked about boot camp and we talked about boot camp and we talked about boot camp. It was wonderful. And we talked about some things that happened while he was in boot camp that were sad. And it was okay. He is amazingly mature after these two months.

And then eventually we had to take him back to the base. We’ll pick him up this morning at 7:45 and we’ll do whatever he wants. If it’s just hang out in the hotel room again all day long and talk, that’s okay by me!

I have my sailor!

P.S. See the beginning of his Navy journey here and Letters from Boot Camp here.