I love looking at house plans. I built a house once before. I was in my twenties, pregnant with Ross, living in Texas. I didn’t know what I wanted in a house other than space. I’d lived in apartments for a long time by then and was tired of it. I didn’t know anything about building a house, and it didn’t much occur to me to make any changes in a house plan. The house plan we picked was chosen mostly because it was inexpensive to build–it was a simple one-story ranch-style house, about 1800 square feet.

One day, Steve-the-Builder and I were talking about the windows in this house and about first-time homebuilder mistakes, and he said, “The biggest mistake I made when I built my house was making the windows too small.” I was nodding along. Me, too. That first house? Terribly small windows, some of which were later torn out at great expense to replace with larger windows. I never even thought about the windows when we chose the house plan, nor did it occur to me that we could change them. But not this time. This time, the house was chosen not so much for the amount of square feet but for the functionality of the way the square feet were laid out along with the design aesthetics (which didn’t play into that first house at all–never did enjoy how that house looked). And the windows? Definitely not small and there are a lot of them. We also made a lot of changes to the original house plans to suit what we really wanted–so much so that when you look at the original house plans, you almost won’t recognize our new farmhouse in them.

Check out the original farmhouse plans, which we bought online, then take another look at the house we made out of them.

One of the most striking differences is that the main floor of the house is lifted up to the second level. The plans were purchased with the “basement” option, but there was too much rock in the ground at the house site. The most economical way to build the house was to elevate the “basement” above grade so that the entire house was built from ground level up, which not only gives a totally different look to the house, it also brings the porch up and had the effect of enhancing our view. (Lucky!) This is why the first level is built with cement block–it was intended as a basement. After the conclusion to build the “basement” above grade was reached, the siding and roofing were chosen to blend and give a seamless coordinating color scheme to work with that turn of events. 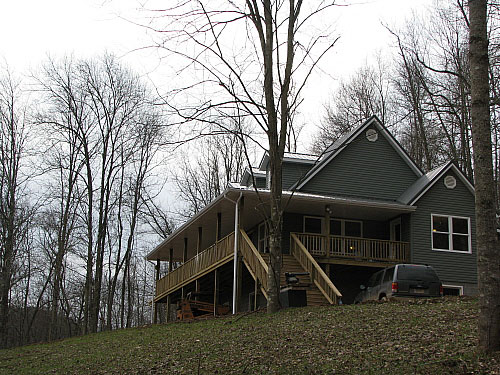 We chose this plan for the basic elements–the huge country porch, the open feel inside, the dormers, the farmhouse-style charm. The idea was to build a modern “old” farmhouse, and this plan suited the bill overall. But oh, how many things we changed! Take a look at the changes we made to the plans, then tell me what you would have done. (I know, I should have asked you all before! I’ll be smacking myself after you tell me all your great ideas.) 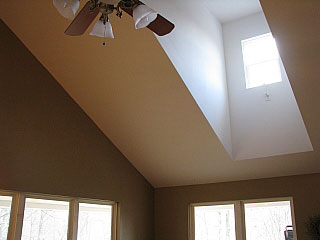 One of my favorite things about the house are the dormer windows. In the original plans, these were false dormers. It came as a surprise to me that most homes built today with dormers have “false” dormers, meaning the dormer windows are for appearance-only from the outside. Out of the three dormers on this house, we were able to open up two of them–the one that opens into the cathedral ceiling in the living room and the one that goes into the loft bedroom (Morgan’s room). The middle dormer is above the staircase and for structural reasons had to be left closed. 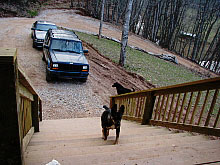 We changed the layout on the exterior steps to work with the geography of our site. The main steps are eight feet wide and built off the side of the porch down to the parking area. Steps go down from the back porch to the parking area, too, and there is another set of steps on the far side of the porch to the other side of the house. (For easy access to my chickens!) The entire porch, by the way, rather than being of painted wood was built out of treated lumber and left with a natural look.

The front half of the former “basement” (below, left) is a storage area on one side and a future TV and computer den for the kids on the other. (There will be a bannister on those stairs! It’s just not there yet. But soon.) 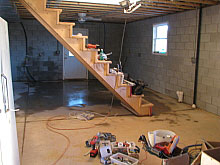 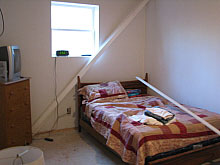 Above, right, one of the two boys’ bedrooms downstairs (complete with some extra pieces of trim propped against the walls). The bedrooms and the bathroom in the “basement” were drywalled and finished with windows and closets. Still, I suppose you could call these rooms somewhat “industrial” as the entire downstairs has a concrete floor with drains in every room. For teenage boys, this sounds perfect to me. They can clean their rooms by running a hose….. We’re going to put an old fridge and microwave down there for cold drinks and snacks. It’s the ultimate teenage boy cave, don’t you think? 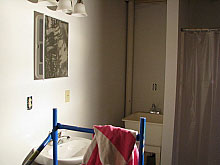 The boys’ bedrooms are on the back half of the house, and in between them is a huge bathroom. This bathroom is as large as a lot of bedrooms. It includes a shower, a large wash tub (for bathing Dookie-the-farm-shih-tsu), a pedastal sink, toilet, and a washer/dryer. (It’s still a bit of a construction area in here.) I described what I wanted, and the plan for the two bedrooms, bathroom, and storage/den areas were brought to me one day by Steve-the-Builder with the rooms and specs drawn out so neatly by hand. I said, “You came up with this and then your wife drew it, didn’t she?” He said, “Yeah.” (We always know these things, don’t we?)

Going up to the main floor, one of my favorite things about this house is the open feel of the living area. 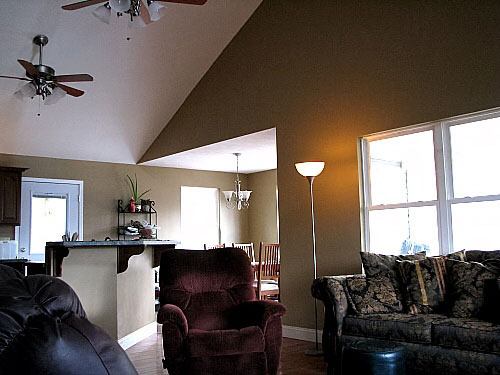 Cathedral ceiling, tons of windows, open floor plan…. It doesn’t have to be big to feel big. 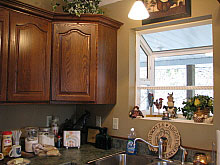 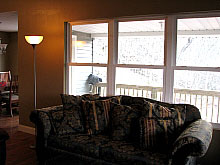 But all of those windows didn’t come without some hard decisions. One decision I’m guessing most of you would have gone for is that garden window (left) in the kitchen. It’s one of my favorite things we added to the house plans. Right, that triple window might be more controversial. Not that the triple window isn’t fabulous–but I haven’t pointed out yet what I gave up to get it.

In the original house plans, there was a fireplace in that spot, and a single window to the side of it. We took out the fireplace and replaced it with a triple window. I love fireplaces–mostly the look of them. I enjoy sitting by a crackling fire, too. I don’t enjoy how fireplaces smell if you don’t clean them regularly (and who has to do that, hmm?) nor did I like the wall space it was going to take up in this room. The decision went in the direction of going for more and bigger windows that I could enjoy year-round rather than a fireplace that would only be useful a few months out of the year. The result is a room full of gorgeous views and light–but it didn’t come without a price.

Another significant deviation from the original plans was the layout of the hall bathroom and laundry room. 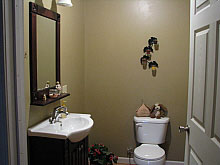 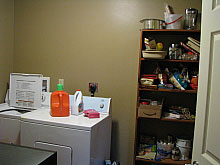 Since we put a bathroom with a shower in the “basement” and were also adding another full bathroom to the loft bedroom upstairs (including the master–making a total of four bathrooms, three of them with showers/baths), we took the shower out of the hall bathroom and reduced the size of the room. That spare square footage then went into expanding the laundry room into a full pantry with room for food and pots and pans storage as well as a washer and dryer. (Yes, this is the second laundry in the house. The boys have their own laundry downstairs and there is a separate laundry on the main floor. Decadent, yes? I’m so in love with the prospect of not sharing a laundry room with two teenage boys anymore. Even more decadent is the part about four bathrooms. For the past two and a half years, I have shared ONE tiny bathroom with three kids. No more waiting in line for the bathroom!)

This decision was based on two things–the second bedroom on the main floor will be used as an office, not a bedroom, and the kitchen feels roomy but it’s actually small when it comes to cabinet storage. As an active cook and a lover of all things culinary and gadget-like, I need the extra pantry space.

The cutest area in the house, without a doubt, is the loft suite. 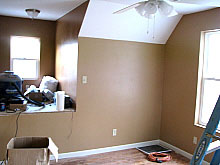 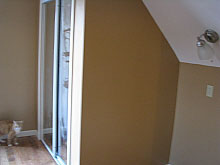 Morgan’s bedroom is full of angles and light. The dormer, as I mentioned above, was opened up and turned into a windowseat. On the right, you can see the closet that was added, along with a nook that will be turned into a built-in study desk. 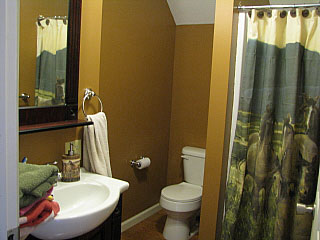 The bathroom layout was designed by Steve-the-Builder and I think it worked out really well. It’s finished now and decorated in horsey-theme.

I want to be 12 and have this loft suite. 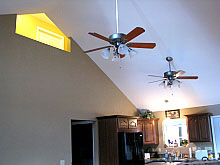 The plans called for an open staircase, but we decided to wall off the stairs to create the only full wall space in the living room and instead designed this cut-out at the top of the stairs. Princess will throw things down on top of my head from here. 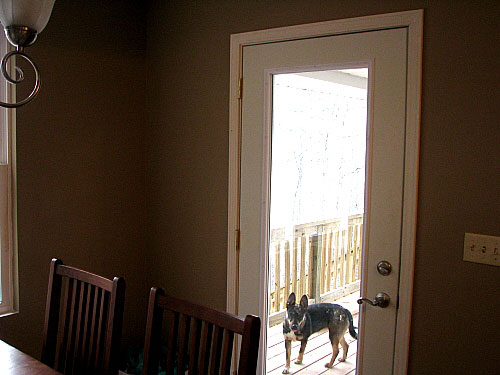 In both the dining room and the office, there were single windows onto the ends of the wraparound porch. Those were both made into doors.

Okay, what would you have done? Go ahead. Don’t worry about me. I’ll just sit here and smack myself all day while reading your great ideas.