We really didn’t have winter here until around the end of January when we got that foot and a half of snow. Snow always sounds so magical. Until it snows. 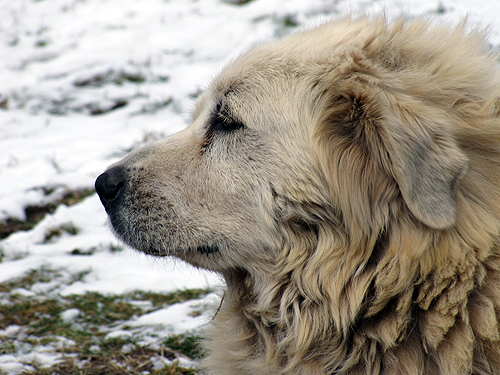 It’s been snowing again this week, but at least it’s not that quantity. Just daily dustings, enough to keep the roads slick and make repeat daily trips to the barn an uncomfortable and non-magical experience. 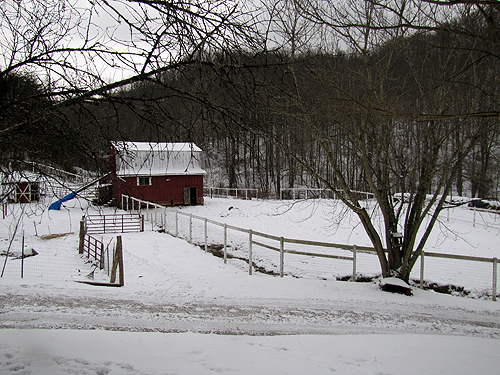 Between the snow and the very low (below freezing) temperatures here, it’s been busy and exhausting. I’m bottle feeding Cherry, in an effort to get more milk from Bella. It’s not easy to get an older baby to take a bottle after they’ve been mama-raised. 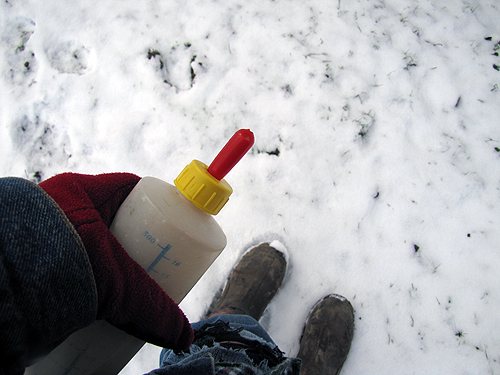 From morning till night, I’m down at the barn giving Cherry her involuntary bottle. I’m hoping it will be voluntary sometime soon. On the upside, at least Bella is now voluntarily jumping up to her goat stand. This is a big improvement over having to lovingly coax (ha) her there on a leash, and makes the long cold days feel a little shorter.

Except for yesterday, but that wasn’t Bella’s fault. Mostly.

Yesterday seemed like the worst day in the world and like it would never end. And that, most certainly, spring will never arrive. After numerous trips to the barn already–working with Bella and Cherry and checking the chicken house for eggs (which have to be picked up quickly in these temps or they’ll freeze and break)–it was time for evening chores. I like evening chores best because then I have help, but this round of evening chores was starting with a task I wasn’t looking forward to. We had to put down George. We’d gotten pretty attached to George. He was our “Ferdinand the Bull” daisy-picking rooster who was getting beat on by the other roosters in the chicken house. We took George out and made a pet of him, hoping to rehabilitate him. 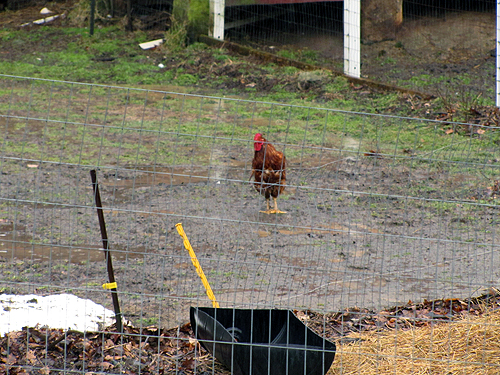 He hung out in the barn yard with the ducks, and knew he was special. He would see Rodney’s truck come up the driveway in the evenings and come running for his special treats. When it got cold, he’d go in a stall in the barn at night with the ducks or goats. He was having problems with his legs ever since the roosters had ganged up on him, and suddenly started going downhill recently. He couldn’t or wouldn’t walk anymore. (Not sure what was wrong–nothing seemed to be broken.) He started using his wings to walk, flopping around on them, which was tearing them up. We took him to the cellar and he’s spent the past week there, in the warmth of the gas stove, with food and water brought to him so he wouldn’t flop around too much on his wings. But he continued to go downhill, and we finally decided it was time to not let him suffer anymore. So, on what seemed like the longest evening round of chores ever, we had to say goodbye to George. That sucked.

Then we got hay for everybody and moved the cows. We checked for eggs. We fed Cherry her bottle. We gave a shot to Annie, who wasn’t seeming like her usual self. We milked Bella. Then Bella escaped out under the barn through the hole the ducks use to come in and take the spills off Glory Bee’s feed tray in her milkstand. Didn’t think Bella could get through that hole! Turns out, she can! She was probably looking for Cherry, who she knows is in the barn somewhere. We recaptured Bella. Got the ducks put up for the night. Settled all the goats where they needed to be for the night. Checked for eggs again.

Supper had been warming in the oven all the while, and we finally went in the house. Then I laid down on the couch in front of the wood stove and collapsed.

That’s winter for ya. Now I remember why I mostly don’t like it!