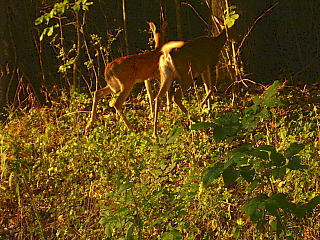 Whitetail deer climbing a bank beside our road.

I feel like I’m five years old when I see a deer. There’s something so romantic about deer. Maybe it’s that they look a little bit like reindeer, bringing visions of sugarplums and Santa’s sleigh. Maybe it’s all that poetic medieval imagery that goes with them–knights and kings and woodsmen. Or maybe it’s that they’re just plain gorgeous, and that they know how to play hard to get.

It’s certainly not that they’re scarce. Whether it’s the dry weather or increasing population or some combination of factors, they’re everywhere lately, and not just at dusk when they normally come out to feed, but all day. Leaping across the road in front of my car, grazing in the meadow bottoms, frolicking along the streambanks–sometimes dozens at a time.

The other day, I had all my kids in the car and a breeze kicked up. Leaves swished along in the air, skidded across the road. I said, “It’s nearly fall. Winter’s coming. Snow!” I looked at my oldest and said, “Remember when snow was exciting?” (When we lived in Texas, it snowed once a year and melted by 10 am. I used to wake them up just to come SEE the snow! Hurry, hurry! LOL! Now it snows for several months and when a good fall of it covers the ground, it stays for weeks…..) He laughed at the memory of snow being something out of the ordinary. I said, “Like deer. Remember when deer were exciting?”

We turned down our narrow country road and there were nearly twenty deer down in a big meadow bottom. I stopped the car and we just watched them for a long, long beat.