Princess asked to write a post for the blog. She thinks Spartacus gets a bad rap. Indulgent mother that I am, here is her story (along with her photo work). Now you tell me, do you believe her version of the Super Banty or mine? Not that we get all competitive or anything....

Once Upon A Time
by Princess, age 12

In a land far, far away, there was a kingdom. This kingdom was beautiful. It had pastures full with flowers and there was always enough to go around. There were never pillagers…..until one unfortunate night when a band of turkeys attacked the king. His men tried their best to save his people and his lovely bride-to-be, but unfortunately they were no match for the savage beasts. When the turkey king came to claim what he had won, he kicked the old ruler out on his butt and claimed his land and his bride-to-be. The beautiful kingdom was no more. The pastures were as dead as dead could be and the people were dying because without the wealthy pastures, they could not grow their grain. What grain they could get to grow, the turkey king took and kept for himself. The bride-to-be was put away in the dungeon of the castle because she refused to be his matron.

When a villager heard of this news, he sneaked away from the village to find the true king. He searched high and low for the former king until he found him. When he informed the former king of the news and what had happened to his beloved, the king stood from his resting roost and yelled to the heavens, “I am Spartacus and no one takes my village and my loved one and treats them that way!” He marched to gather his former men who loyally followed after him. They gathered their swords and sprinted to the village, sneaking their way past the guards as they headed for the castle. They attacked from behind to get the upper hand. It was a long and drastic battle, but in the end the good always prosper.

And so Spartacus and his beloved lived happily ever after. 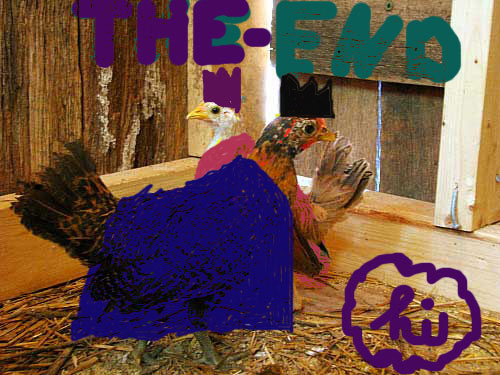