People are ten times more likely to send scones to women and biscuits to men, did you know that? I pick up on lots of almost useless information like that from my Etsy shop. But–Mother’s Day is nearly here! Looking for ideas? I’ve got ideas! In fact, I’ve got SCONES, and we know women love scones! 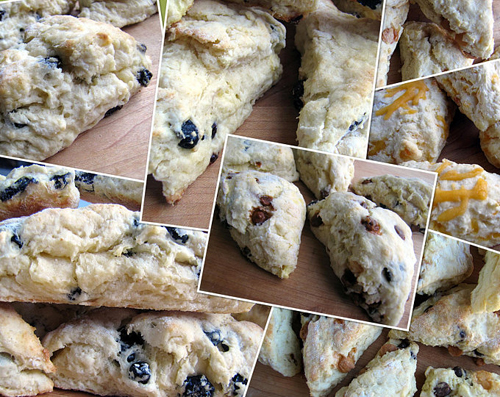 I’ve got scones in nearly every flavor imaginable. I’ve got cranberry orange pecan scones, blueberry lemon scones, cinnamon pecan scones, apple peanut butter scones, and cherry almond scones. I’ve got roasted garlic and beer cheddar and jalapeno scones, too, if you want something on the savory side, or if just want something off the beaten path but still sweet, how about peanut butter chocolate scones or pineapple coconut scones or even ambrosia scones? If you want a kind of scones I don’t have listed, ask me, I can probably make it. See all of my scones here.

Even better, I have monthly club subscriptions for scone of the month clubs in three month or six month periods.

I also have biscuit clubs, cookie clubs, fudge clubs, and muffin clubs. If you can’t make up your mind, I have treat clubs where you can choose combinations of scones, muffins, biscuits, fudge, and cookies. (Women love muffins, too, by the way–muffins are right up there with scones as one of the most popular gifts for women.) See all of my gift clubs and other gift ideas here.

Whether you’re making a one-time purchase as a gift, or a club subscription, I do lovely gift letters (free) on my shop stationary, so be sure to include a gift message if you’d like one. See everything in my Etsy shop here!


Morgan and her best friend Jennie stopped by last weekend. (Some of you may remember Jennie–she lived with us for a time when she and Morgan were in high school, after her family’s house burned down.) Jennie lives in Kentucky now (and is expecting a baby!) and had been visiting with Morgan in Morgantown for a week, then stopped down here to visit with me before Jennie went back home. They’re both 22 now, young adults, smart, interesting, and full of conversation–they talked for five hours straight and were very entertaining.

One topic that stayed with me in the back of my mind after they left was their displeasure with being termed Millennials, and that they didn’t feel as if they fit in as Gen Y or as Millennials, and mostly that they just wished people would stop calling them Millennials. I had no idea what Gen Y or Millennial was–I’ve heard the terms in the media but have never paid attention. After they left, when I had time, I conducted some limited and frivolous research to figure out exactly what a Gen Y and Millennial were, mostly because I felt a connection to their lack of connection with such designations.

Because–I’ve often been told that I’m a baby boomer.

The widespread use of naming a generation really began with the baby boomers, and they are the only generation primarily defined by birth rate. Birth rate doesn’t truly make a connection, but the term isn’t interested in such factoids. Most often, baby boomers have been defined as people born from 1946 to 1964, after the Greatest Generation restarted their lives following World War II–and apparently restarted it with a lot of sex, thus a lot of children.

Not that they, or anyone else, called themselves the Greatest Generation until much later since no one was calling anyone anything until the baby boomers came along. Then, perhaps in a fit of jealousy that nobody else was getting a generational term, the terms Gen X, Gen Y, and most recently, Millennials, were created in a conspiracy between academia and the media, and Tom Brokaw all by himself coined the Greatest Generation.

This photo (below) was taken in 1970 at my great-grandfather’s grave in Stringtown. I’m the girl on the right. That’s my father, an official card-carrying member of the Greatest Generation. 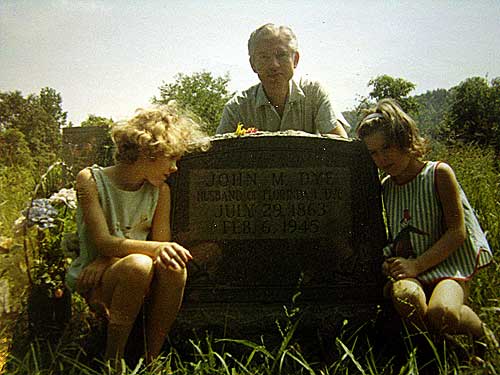 My dad was a tailgunner in the 456th Bomb Group, 745th Squadron, 15th Air Force, based out of Italy (near Foggia). He flew missions over Germany (Munich), Poland, Czechoslovakia, Yugoslavia, Greece, Hungary. In this photo, he’s the second man from the right in the front row.

Back to baby boomers. My parents were classic parents of baby boomers. My father returned from World War II service, promptly married and started making babies with my mother, popping out two children in the late 40s. My two brothers were classic baby boomers, growing up in the 50s and 60s. Then my parents decided to get frisky in the 60s and have two more children. I was born in 1964 and have been called a baby boomer all my life. By the time I was born, they were already calling baby boomers baby boomers. And yet, born at the tiny tail end of this “boom” generation, I have always felt little connection to them. Sure, I grew up in a house that was a “baby boomer house” with “parents of baby boomers” with all of their cultural 50s mentalities, but in the world outside my house, my peers were Gen X’ers and my formative years were spent in the Gen X culture of the 70s and 80s. My formative experiences were a planet apart from the 50s and 60s, which created the majority of the experiences of classic baby boomers. So-called baby boomer children not even born until the frisky 60s are lost in the generational crack in the sidewalk.

I feel as little like a Gen X’er as I do a baby boomer, which was the connection I felt when Morgan and Jennie were expressing their lack of connection to either Gen Y or Millennials. In my (limited and frivolous) research into the subject, I found this article, in which the writer expresses his lack of connection to being a Millennial, for various reasons, and felt I found some acknowledgment of my own lack of generational connection (at least in media terms).

Interestingly, a new generational breakdown (see “Generations for Sane People”–the second generational chart in the article) defines baby boomers as ending in 1961, which therefore redefines me now an official Gen X’er. Or I’m a baby boomer–if you believe previous definitions extending to 1964. This breakdown also includes a “Silent Generation” sliding in between the Greatest and the boomers. Perhaps the Silent Generation is yet another crack in the sidewalk, not old enough to fight in WWI yet too old to be boomers, lost as are all born on the cusp either way of these generational dividing lines. My three children are all firmly–by date–in the Millennial camp, but as Morgan and Jennie expressed, they are so close to Gen Y that they cross-identify and/or identify with no generation at all, which is the same conflict I have between identifying with either baby boomers or Gen X. (Is life simpler if you are born smack in the middle of a generation, so that you are the classic sample?) Before you say none of this means anything, note that being tarred with the Millennial brush actually can hurt those born in the timeframe. “No, Mr. Baby Boomer, please hire me, I’m Gen Y, not Millennial, I SWEAR!” (Though, whether the hurt is real or imagined, the fact that they’re hurt by a concocted term is only used against them when they’re dismissed as always thinking they’re “special flowers” and everyone needs to worry about their feelings. Man, they just can’t win, can they?)

Millennials are widely deemed (in the media) to be the worst generation EVER (I told you we had no place to go but down!) and are ruining everything–no wonder young adults today want to disassociate from them! The more troubling concern might be what did we who are the parents of Millennials do wrong to create this work-nap-taking, restaurant-chain-killing, top-sheet-eschewing, entitled, slacker generation? If those are the deciding factors, I wouldn’t call any of my kids Millennials! (What is with Millennials and the top sheet? Maybe we DID raise them wrong!)

My dad, with Ross, Weston, and Morgan at my great-grandparents graves at the little cemetery in Stringtown. 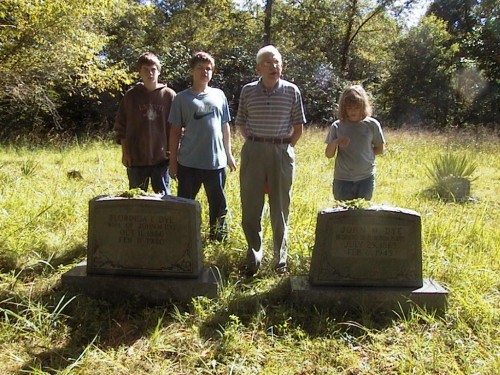 Do you associate yourself with any of these media-concocted generational terms? Do we need them? Can we stop it? Can we officially blame baby boomers for inspiring this whole thing? OR can we blame the Greatest Generation, because they’re the ones who had all the sex and made the baby boom to begin with, instigating this entire generational dividing terminology explosion while sitting on their Greatest laurels?! If we can actually find something wrong with the Greatest, does that mean we can finally have a chance to be Greater?

A couple weeks ago, I was out on the driveway at the farm and saw a car driving by slowly. Then a few minutes later they drove back down the road slowly, past the farm. I’ve seen this sort of activity before and had a feeling about it, but I was busy and didn’t want...
Read More

Spoiled brat. Glory Bee, waiting to be milked. I tried to tell her the time changed and I’m really not late if it was yesterday. Right? Several people have asked about Rodney. I don’t like to go into a ton of detail for the sake of his privacy, but I can give you an update,...
Read More

Whenever I order chicks from the hatchery, they send a free “exotic” chick. You can say no to the free chick, which I try to tell myself I should do but I never listen to me because who can turn down a free chick? Yet I know the chick is always going to be a...
Read More