2. differing from the ordinary in a suspicious, perplexing, quaint, or eccentric way; peculiar

Courtesy musings from my watering can. 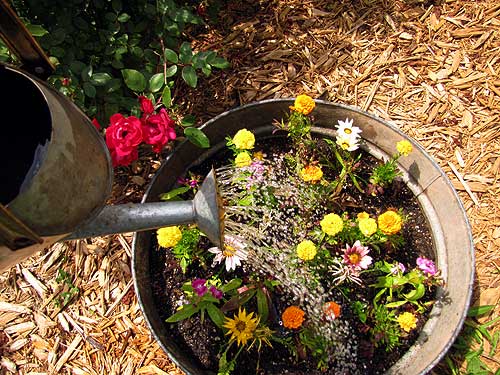 I had several different experiences with people over the past few days, and I’ll let you draw your own conclusions as to what kind of funny they are. Note that funny #2 encompasses a wide variety of options.

Since I moved here, I have been faced with an ongoing problem that I have tried to ignore, but eventually was unable to ignore any longer. I don’t want to go into the specific details of the problem, but it involved my property rights and the access roads on my farm. I am a believer in defending all comers against property rights. There was also some (minor) illegal activity involved. Not to mention some nuisance. This past week, I determined that it was time to address the problem head-on.

The result was that the offending party came to my front door, cussed me out, and told me they had no intention of doing what I had asked them to do to rectify the situation–then stomped off.

I was still shaking from the aggressiveness of the verbal assault when Adam showed up to work on my milking parlor. I told him what was going on and he said, “You need a man on the place.”

Adam said, “I don’t mean to offend you. I’m just trying to help you. People wouldn’t come to your door like that if you had a man here.”

The hired men who work on my farm without fail think I need a man on the place. And it’s true, they are just trying to help, but that’s not the answer. They’re quaint and sweet and just worried about me. Because I’m a woman running a farm by myself. They are one kind of funny.

Then there are the people who try to take advantage of me. Because I’m a woman running a farm by myself. A totally different kind of funny.

Then there is the ‘hood. At Stringtown Rising, the ‘hood was comprised of the handful of people who lived around the river ford. Here, the ‘hood is the handful of people who live at the end of this road. A small rural ‘hood has a dynamic all its own. Knowing how to live within the ‘hood is critical to an everyday sense of safety and support. People in the ‘hood depend on each other, provide for each other, and have certain expectations from each other. The people who live down the access roads on my farm, despite also being at the end of this road, are not part of the ‘hood. By their own choice, they reject the ‘hood, separate themselves, pass through without ever knowing the satisfaction of being part of a rural micro-community. What I like best about the ‘hood is they don’t see me as a woman running a farm by myself. They just see me as a valid, contributing member of their community, and their support helps me remember to stand on my own two feet as a person not a woman. A person who can solve my own problems.

I called the sheriff. The sheriff dispatched a deputy. And the problem was promptly resolved to my satisfaction–everything from the illegal activity and the property rights encroachment to the aggressive behavior. There’s nothing like a badge to ramp things way down. I love law enforcement. And I love showing men that I can’t be intimidated by a cowardly verbal assault.

I went to the little store in town yesterday for some t-posts. Adam is going to work on my field across the road later this week to get it ready for the horses. He walked the field to see what needed done. To repair and reinforce the fencing, he said I might need to lay in seven or eight t-posts, but ten would be better, just in case. I told the young man who was doing the loading that I needed ten t-posts. He said he had another customer ahead of me getting t-posts and he wasn’t sure he’d have ten left. I turned around and there was a (I must say) very good-looking man about my age standing there. He said, “I’m just staking tomatoes. If you need the t-posts, you can have them.” I told him to get his first and I’d take what was left. I went to the back to count the t-posts. He followed me. The young man followed everybody. The cute man kept insisting I should take the t-posts first. I told him that I probably did not really need ten and it was really okay and he could take what he needed for his tomatoes, and with some struggle, I left with nine t-posts.

And that there is yet another kind of funny. For all the “bad” people in the world, there are always the ones who will try to give you the t-post off their back.

People are just funny that way.