When I was a kid, one of the houses we lived in had an intercom system. The intercoms were kind of ugly box-like things built into the walls. I think my mother tried using it a few times, then everyone gave up on it. It was weird and very 70’s and….maybe, just maybe, we were prone to switching it to the Off position so she couldn’t so easily call us downstairs to set the table when we were busy playing our David Cassidy records.

And maybe, just maybe, I thought I was smarter than my mother when I realized the Princess’s separate phone line in her room, so she can talk all she wants to her endless flock of friends, could be used like an intercom system–only better because she would never not pick up a ringing phone. A ringing phone–it is her beacon, her magnetic force, her very reason for being. I have leaped over Formica tables and barrelled into antique spinning wheels in the old farmhouse trying, and failing, to beat her to a ringing phone. But– Now! How handy! No need to haul my lazy self up the stairs to her loft bedroom, or worse, yell up there. I can just call her!

Turn the TV down!

Come down here and feed the dogs!

I am a genius.

Then she called me.

Princess: “I want a sandwich, you know, on your bread, lightly toasted. Just to where it’s a little bit crispy but not hard. Just lightly toasted. LIGHTLY. Mayonnaise, ketchup, ham, and swiss.” 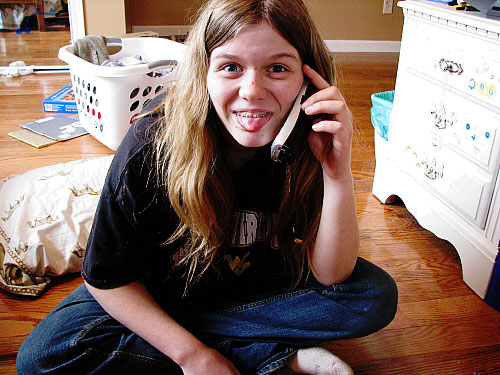 Me: “Well, I’m not bringing it up there! You’re going to have to come get it!”

Cuz, you know, I have this whole situation under control.