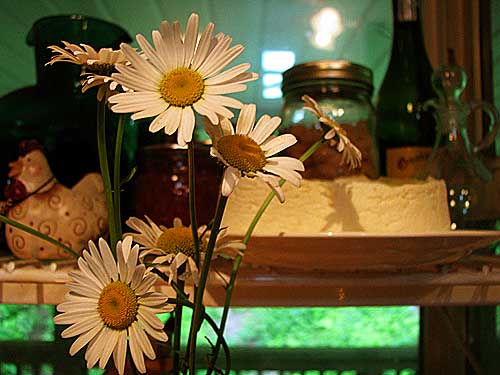 Daises picked from my great-grandfather’s farm. That’s a wheel of Monterey Jack air-drying in the background, by the way!

This weekend was a relatively slow weekend around here. Slow meaning I didn’t let the children force-drive me all over the countryside. I’m dating, and it’s a real hardship because I don’t get any of the actual dating pleasure. I just drive people to dates. Weekend before last, I spent four and a half hours driving people to dates. I probably went about 20 miles altogether as the crow flies. One of the highlights of that adventure was discovering for myself that Weston’s girlfriend does, indeedy, live on a worse road than ours. She’s so perfect! Now that I’ve been to her farm, I know she must feel like she’s on a motor speedway when she comes to ours. Morgan thinks she has a boyfriend, but she only gets to see him about once every two months when his parents bring him to visit here. I took her to his house during the four and a half hour odyssey. I told her she could see him again when she starts driving.

This weekend I stayed home other than a brief foray across the river to my great-grandfather’s farm to dig up rhubarb. Or what we thought might be rhubarb. It had been spied by 52 on an earlier day and we went back to inspect more closely. My great-grandfather once owned over 800 acres across the river from where our farm is now. Just one small piece of that property remains in my family, passed down through my Great-Aunt Ruby, who unlike the rest of the scurvy devils (including my father) didn’t sell her inheritance. This property remains in my cousin’s family, which gives me license to traipse around and dig stuff up without getting shot. 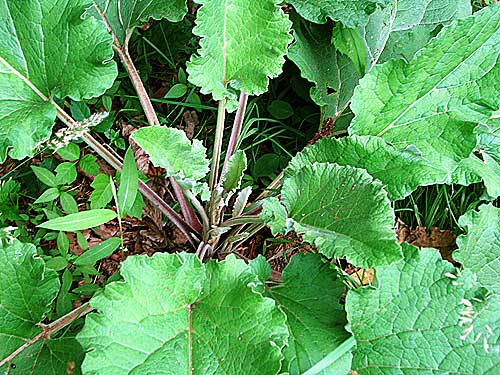 Unfortunately, upon closer inspection, 52 came to the conclusion that this wasn’t rhubarb. I wouldn’t recognize rhubarb if it was slapping me in the face, so I have no idea. I just want some pie, you know? And the chickens ate my rhubarb down to the ground. So I picked some daises and went home.

Other than picking daisies, other highlights of my weekend included my ongoing pantry project. I’ve been involved in a massive cleaning out and reorganization of my pantry that has turned my house upside down for the past week as I dragged everything out of the pantry and began the slow process of reloading it in a more functional manner. 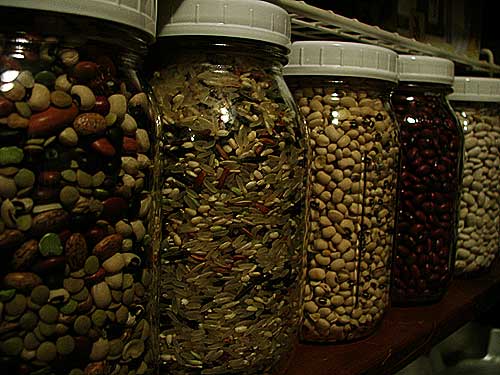 I found odd things in there that don’t belong, and some things that had been forgotten, and mountains of powdered sugar because I couldn’t find it in my messed-up pantry and kept buying more.

If you need some icing, I can hook you up.

I uncovered a couple bags of stale marshmallows that my cousin’s wife, Sheryl, had given me eons ago for the goats and had a marshmallow party with the animals. 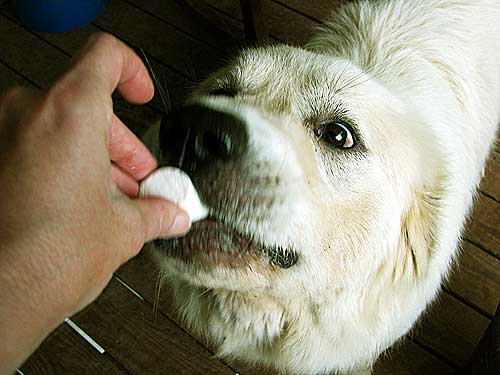 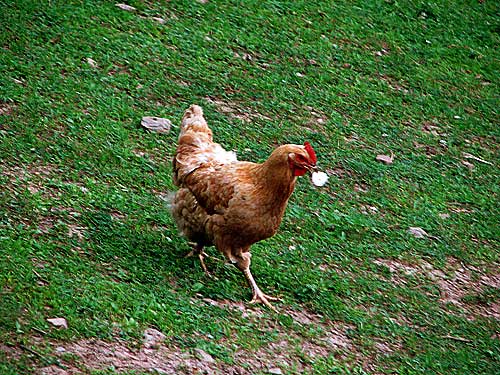 Clover: “I’m eating for three. I should get more marshmallows.” 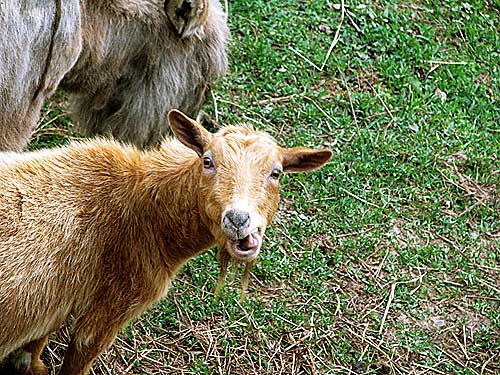 I don’t know if she’s really pregnant or not. She might just be making that up.

Marshmallows aside, the most exciting thing that happened this weekend was THE REFRIGERATOR!!!! 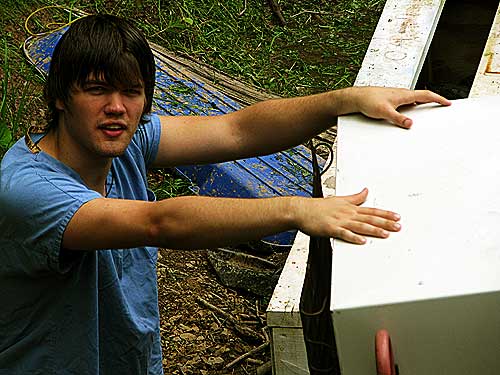 What with all the eggs, milk, cheese, and cream around here, refrigerator space is really at a premium. I’ve been longing for a second fridge for some time and this weekend, it appeared, free and second-hand, and just perfect. Weston and 52 manhandled it up the steps to the back porch, where it now sits convenienty outside the kitchen door to manage all my excess and get it out of the way of the regular refrigerator stuff. We also keep the grill on the back porch, so a fridge out there will be handy for cooking, too. 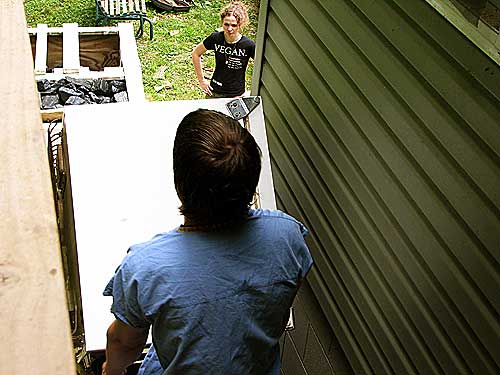 The girlfriend was here this weekend. Now that I’ve been to her farm, I know that her mother spent 5,692 hours driving her here. Even though they don’t live that far away. That’s life in the country. 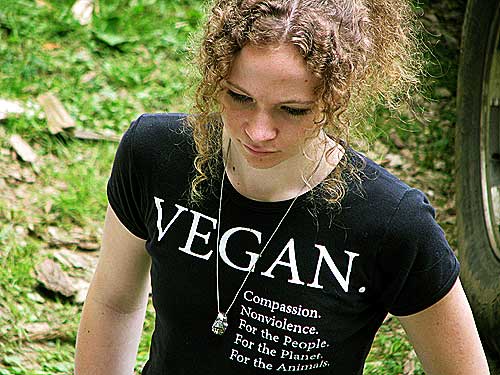 She’s so cute. I wish I could get her to eat some cheese.

In other Stringtown Rising Farm news, my lonely duck is a-lonely no more! 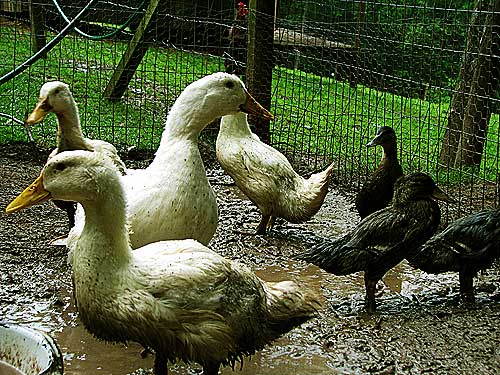 Miss Puddleduck: “But I’m still sitting on the eggs!” 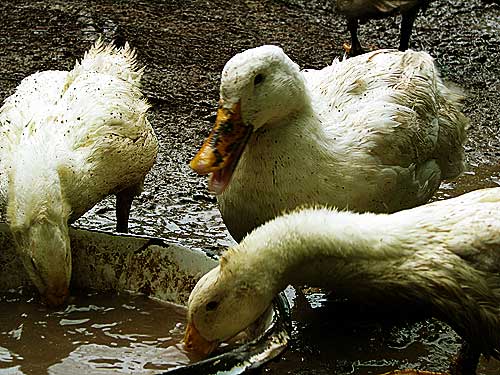 It’s all very confusing for her.

And then 52 burned some stuff on the grill…. 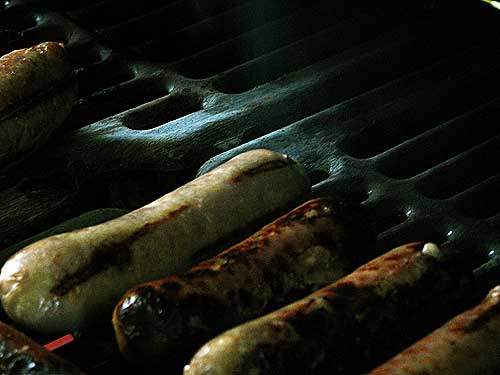 ….and our weekend was complete!

P.S. Hold a good thought for me today as I take Weston back to the DMV for another go at his driver’s license. He failed it last week because he, brilliant boy in line for the National Merit Scholarship, couldn’t show the DMV test administrator where the headlights are….. He’s 17. We’re dating. There’s three of us in this relationship and one of us wants OUT. (Four if you count the girlfriend’s mother. But she’s nicer than me. She’s the one who always brings the girlfriend over here on the weekend. And then all four of us go to the movies every Wednesday. I think maybe she and I should start dating!!! Then there’d be a reason for us to be there when we don’t even get to watch the movie! Oh never mind…. Her husband, and 52, would probably object…..)