Cold and neglected, he trudges the long and lonely road–uphill both ways–home from school. His daddy’s in jail and his mama’s home drunk, if she’s home at all. He looks forward at the end of his journey to enter his sad little shack, knees bent from exhaustion, to gather crumbs from a cracker box, water from a puddle his only drink. Life for this poor child is hard. He struggles just to survive– 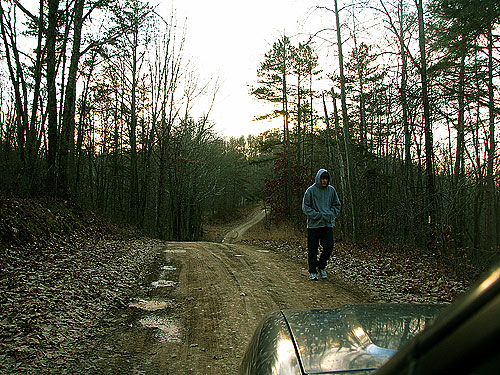 (I made up that sob story for him to save him the trouble. Obviously, he had a hoodie, which he had over his head, and he told me the ice he chipped off the road tasted good! He was thirsty….. I brought him home and made him take out the trash and carry in a 55-pound bag of dog food then he played on the computer while I fixed him a big spaghetti dinner. If he was patient enough to wait an hour and a half for me to get him from Georgia’s on my way to pick up Princess from basketball practice, he could have been toasting his feet watching TV instead of walking.)