Another year, another prom! This year, it was Weston and Morgan both. Morgan, a 9th grader, is too young to go to prom, but social butterfly that she is, she finagled her way into being the just-a-friend date of a senior who didn’t have a date. Morgan is one of those people who is going to make the most of high school. 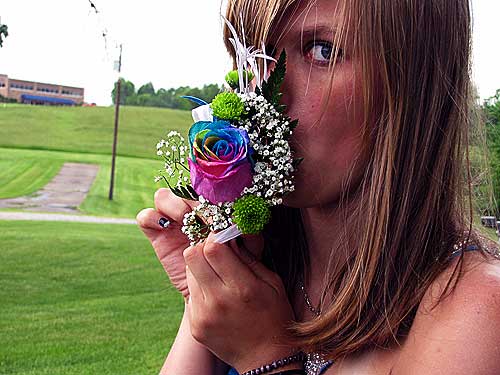 Notice the tri-color rose in the boutonniere Morgan is holding. The boy with no date actually took three girls to the prom, so he had his boutonniere made to match all three of their dresses. (Morgan was the official date, or else she couldn’t go. The other girls were older.)

One of the popular spots to have photos taken before prom is the McIntosh Mansion. Here is where they discovered their flowers had somehow not come with pins to attach them, which created some confusion and consternation. 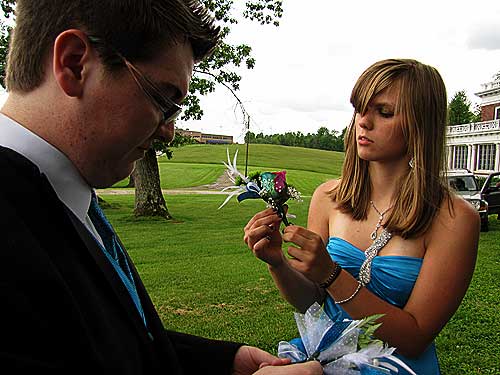 He propped his in his pocket and she propped hers in her dress and we went on! 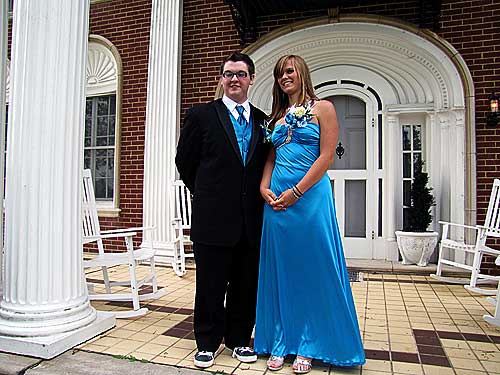 By the way, I got that dress for Morgan for $40! Out of a vast sea of prom dresses that cost hundreds of dollars.

It didn’t take long before they were acting like goofballs. 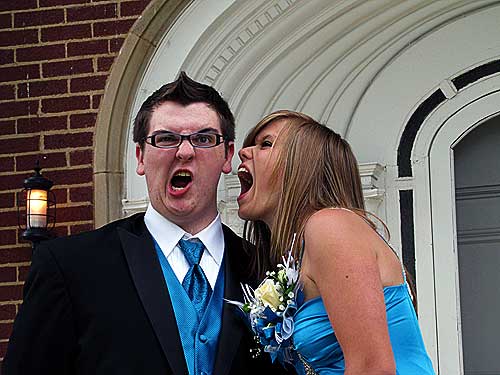 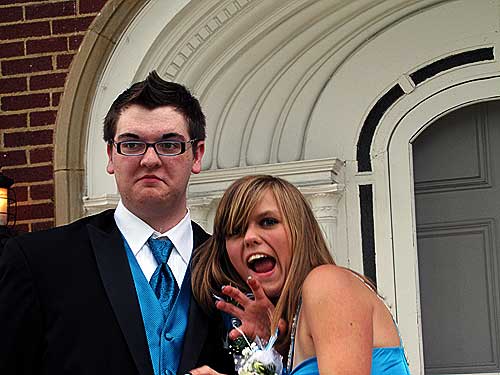 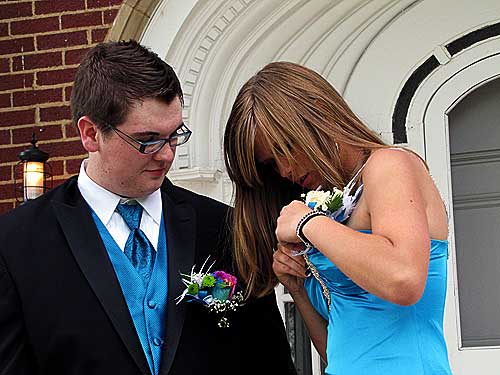 I promised to find pins before prom time and left them to goof around on their own while I headed to the World O’ Pins. I was going to Weston’s girlfriend’s house in town to watch Weston and Mariah get dressed. Her mother is an accomplished seamstress (i.e. she has a lot of pins). They have a farm outside town, on a road worse than ours, and rent a small place in town so they can get their kids to school in the winter. Mariah’s mother made the body of the dress, and Mariah did the lace and detail work. She was still making last finishing touches to the bodice. 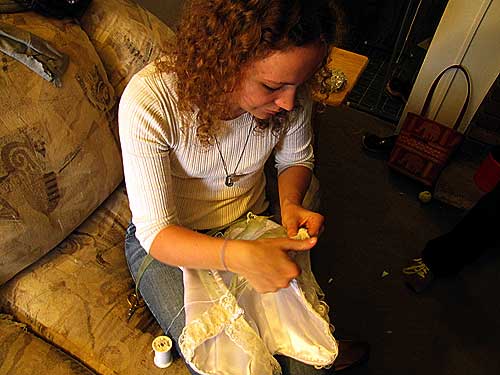 Mariah, tying the bow tie they sewed for Weston. 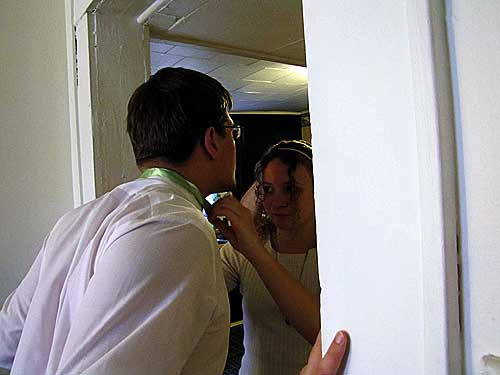 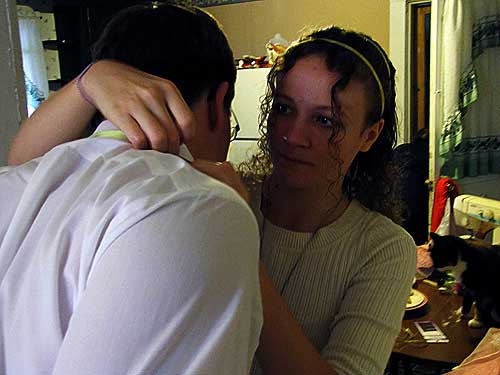 Helping him on with the cummerbund, which they also made. 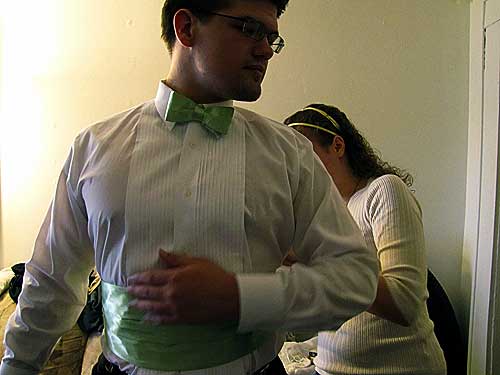 By prom time, it had started raining, which didn’t make for the best photo op at the high school. Here is my cousin’s handsome son, Madison, who just finished his first year at West Virginia University. 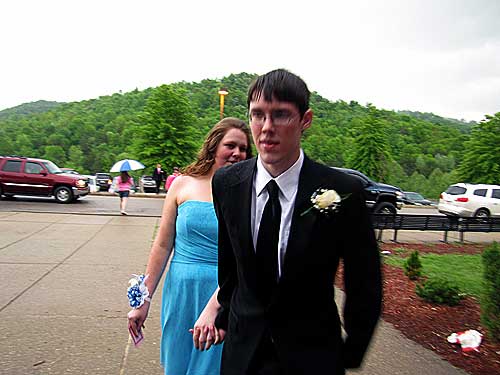 He was with his girlfriend, the lovely Amanda, who is still in high school. 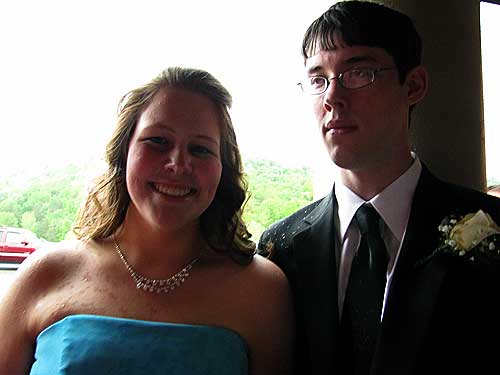 The lovely Amanda, who tricked me into taking Morgan to the 4-H livestock show by saying she needed Morgan to braid her hair–then when we got there, her hair was already done. (Really! See here.) Then she never came over to train Glory Bee for me. I almost tripped her going into the prom for that. (I’M JUST KIDDING.)

Morgan and her friend, arriving in the rain. Still clutching their pinless flowers. 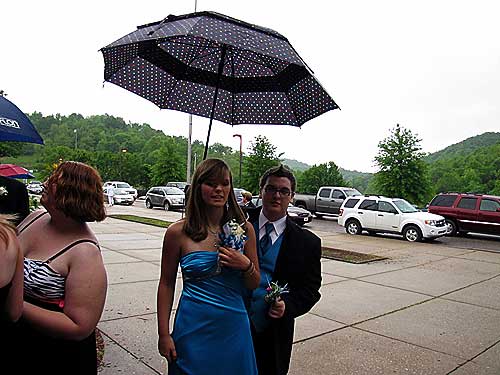 I saved the day with my pins and told Sheryl (my cousin’s wife and Madison’s mom) to put them on. She’s a nurse, so if she stuck them, she’d know what to do. Or at least it would be her fault! 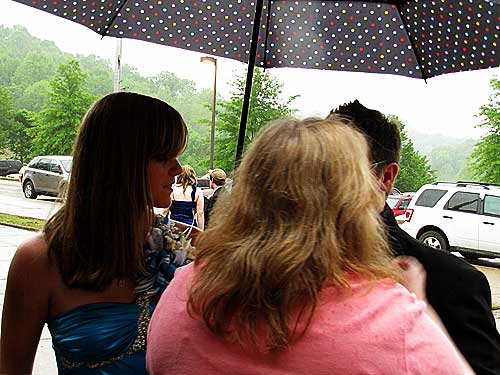 And then the prince and princess arrived. 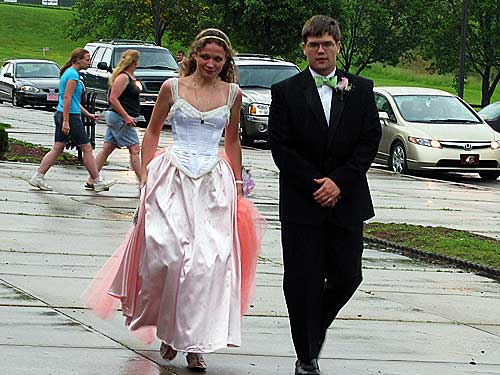 Mariah never fails to look like a princess in anything, but this dress was especially princess-like. 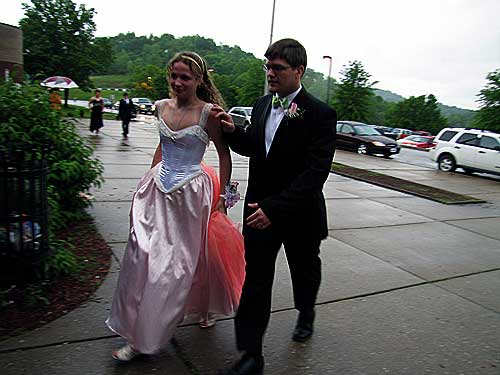 It was the most beautiful dress I saw going into the prom, and no surprise–because it was a homemade dress. Here is a view of the back. 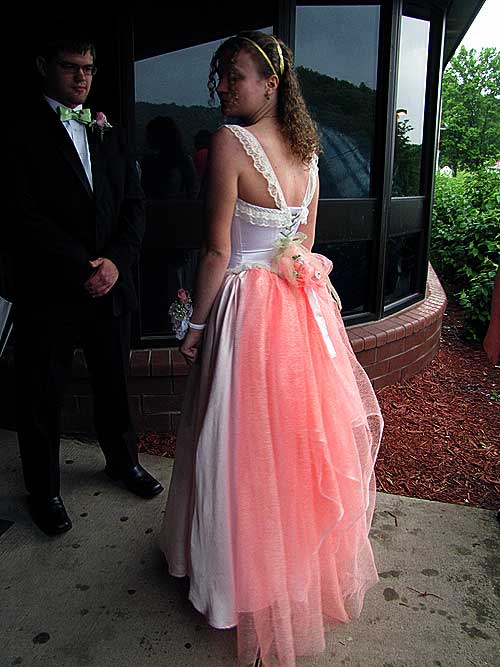 These two……… They’ve been together for two years now and they are like two bugs in a rug. She is one year behind him in school, and will be going to WVU, also. They practically lived together this winter when Weston spent a lot of nights at their house in town so he, too, could get to school and not miss too much his senior year. Big changes coming up with college for Weston and a year of separation before she joins him at WVU–though he will be home many weekends, I know. To see her, not me! I think they are one of those high school couples that will make it past high school. They have something special. 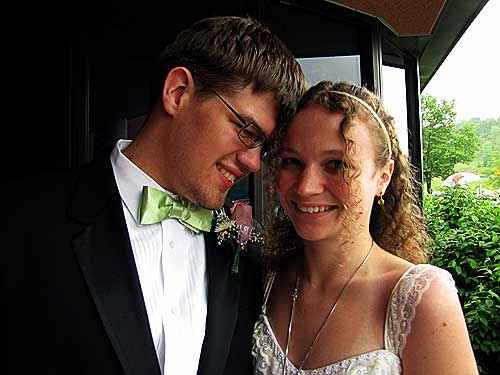