Weston hitched his ride back to Morgantown on Saturday at noon. I had been out, and came home just as my cousin’s son Madison, who also attends WVU, was coming down the drive. I stopped by the mailbox and got out. Madison stopped his car at the end of the driveway and Weston pushed open the passenger side door, unfolded his six foot frame, and gave me a hug in the middle of the road. Then they were off.

I walked into the house, set things down, looked around and saw this odd thing remaining in the post-holiday clutter….. A pet carrier, sitting on the hearth. Whenever Weston comes home, he brings his pet rat, Morwen, in a pet carrier. Back in Morgantown, she has a nice cage. The pet carrier is like her travel camper. He’s had Morwen for a couple of years and she always comes–and goes–with him. One time he found a vole in the yard when he was doing some digging for me. He brought the vole inside to be Morwen’s friend.

Morwen doesn’t have any friends.

Anyway. Why would he leave Morwen’s carrier here? Was she riding back to Morgantown in his pocket? Where was I going to put the carrier in the meantime? Because surely you jest, it’s not sitting on my hearth until Christmas. I pondered this problem as I came closer and bent down to inspect what all was left inside the carrier that I might have to deal with–leftover food, doo-doo, remains of a vole, whatever.

This was right about when the rat scurried up to the wire door and poked her wiggly little pink nose at me.

First, I just screamed, then I started screaming for Morgan, who was upstairs.

Morgan, running down the stairs: “Weston would never leave his rat here.”

I was slightly hysterical. 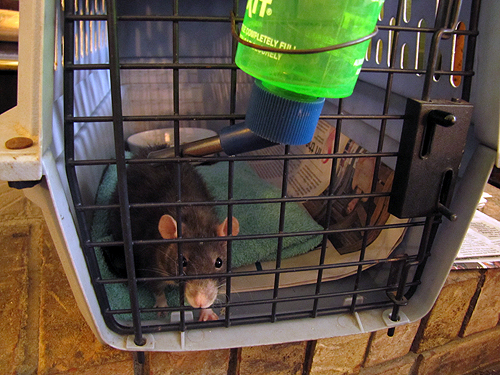 Desperate attempts were made by phone and text and carrier pigeon to get hold of Weston and Madison, but to no avail. Weston’s back in Morgantown now, and Morwen is…..AT MY HOUSE.

I’m stuck with her till Christmas.

P.S. Weston also forgot his wallet–drivers license, social security card, WVU Mountaineer ID, everything. He’s in Morgantown with no identification. Perhaps this is because he doesn’t want to be found….