Before I moved to West Virginia, I used to think the one-lane road that runs in front of the old farmhouse where I live now looked like a bike path. In my plush suburban world, I’d never seen a driveway that narrow, much less a road that people around here consider a major thoroughfare where cars actually pass one another. Now I’m about to move to a farm that is on a road even more narrow and it’s not even paved. And okay, so to get to our farm, from one direction you have to drive through three creeks and from the other you have to ford a river, and both ways you have to drive that narrow unpaved road past steep precipices with no guard rails. We’re not in Kansas anymore, Toto!

So a giant truck–I mean, the biggest 18-wheeler they build–arrives at my old farmhouse from Ohio with the kitchen cabinet delivery for my new farmhouse. You know, the one down that unpaved road past steep precipices and through three creeks, which is usually how I get there since going around to the river ford is a longer route. 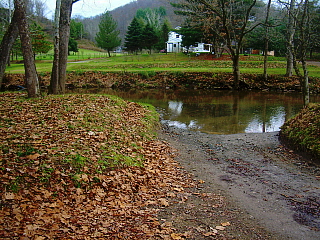 (Left: the river ford.) Two big men got out of the big truck and one of them said, “I stopped in town and they told me we’d have to drive through three creeks to get to your house.” I said, “Oh. Yeah.” Well, he wasn’t so sure about that and decided he’d better hop in my car and let me take him out there for a look-see. We didn’t get a quarter of a mile down the road before he said, “I’m not taking my truck down this road.” I said, “That’s okay. You can just go around the other way. That way, you only have to drive through a river.” I don’t know why that last sentence seemed to upset him.

I tried to convince him it was only a small river but by the time we got to the river for a look-see at that, he was shaking his head, no, no, no, he was not crossing that river. I said, “It’s only like a foot deep! It’s got a rock bottom! I’ve driven through it lots of times! It’s hard road all the way if you go that way except for when you cross the river!” Our farm borders the river, so from that direction, all you have to do is drive through the river–and you’re there! There was no convincing him. 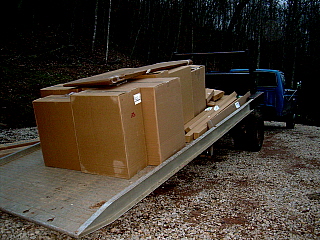 I went home, told my cousin the story of the two big men in their big truck who wouldn’t cross the river. I said, “Well, you know, they were from the city.”

My cousin said, “You really are a country girl now.”

I am! I must be! I’m baffled by people who won’t drive into a river. I really am a country girl.

And I have the boots to prove it, you know. In case you forgot!