The line of cars trying to get to town on Black Walnut Festival parade day is legendary.

My ability to plan ahead and get there early enough to avoid it is not. 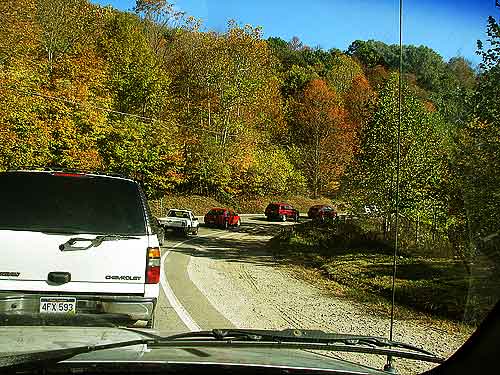 Which is how I ended up bailing out less than a mile from town in the creeping traffic to walk to the park on the edge of town where I had been told to meet. 15 bailed along with me and walked fiercely fast ahead of me while I whined and tried to catch up. I said, “Slow down! Don’t you know this is uphill?!” He grumped something about running across football fields in full pads and kept going. 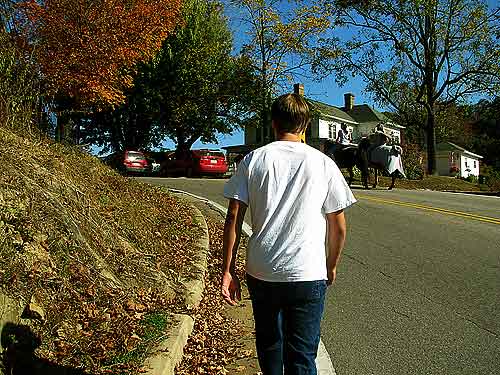 He ditched me as soon as we got to the park, leaving me alone and bewildered. Here I am! Ready, willing, and able to embrace my pomp and circumstance! Where was it? I arrived at the park with little knowledge of what I was supposed to do then. I had received a letter telling me to be at Washington Park by 11:30 and that I was riding on float #11. I was to be in the parade as one of the honorary grand marshals, of which there were several (all writers who were local or had local ties of some sort). The park was full of pre-parade action. It was like watching a parade before the parade. Which was nice since I was going to pretty much miss the parade by being in it. 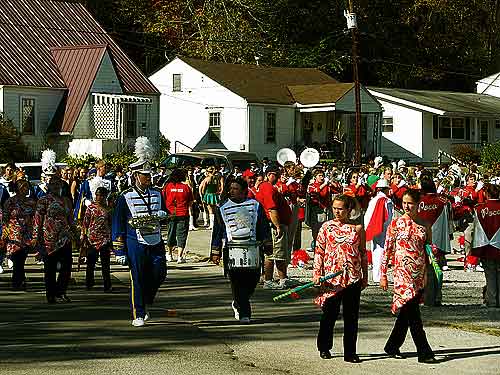 I guess I thought somebody would be standing there with some sort of signal telling me to go somewhere. But there was just a bunch of people standing around who had no idea what I was talking about, with a background of bands and majorettes. I finally figured out to say, “I’m on float #11! Where is #11?” since it was clear nobody had heard about any honorary grand marshals. 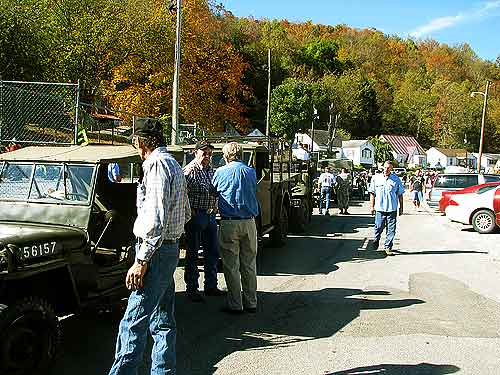 Somebody pointed me to a white convertible, which was #12. In front of #12 was a convoy of Army trucks. Ooooh! I was going to ride in an Army truck! I went to the truck in front of #12 and said to the Army man, “Are you #11? Do I get to hold a gun?” He found the whole numbering thing very confusing and me even more so. He scuttled off and came back to tell me that the entire Army convoy of trucks constituted #8. 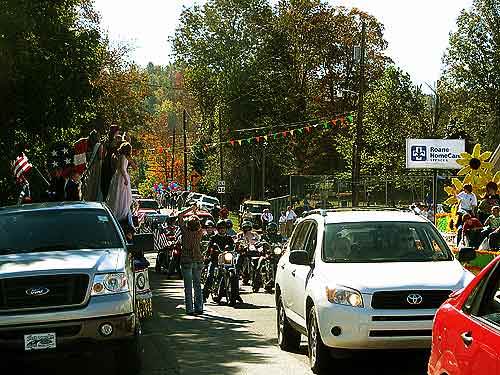 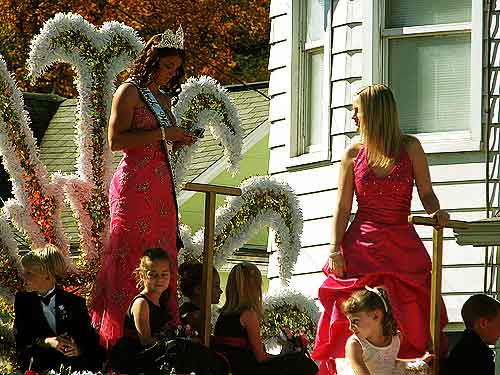 The official float of the Black Walnut Queen and her court!!!

But…. I did not bring my evening gown. Hunh. I thought about asking the Queen for help, but she was busy checking her text messages and I figured she didn’t know where I was supposed to be, either.

And finally, eventually, just when I had about decided to go back to the park and throw myself into an Army truck whether they wanted me or not–because I was all done walking and I had to get to town somehow and we were still quite a way from the town center and my people who I was to meet up with after the parade–I went back to the sign-in table and this time they ignored the numbering and searched for the honorary grand marshals float.

Which was not #11. Or anywhere near the park. 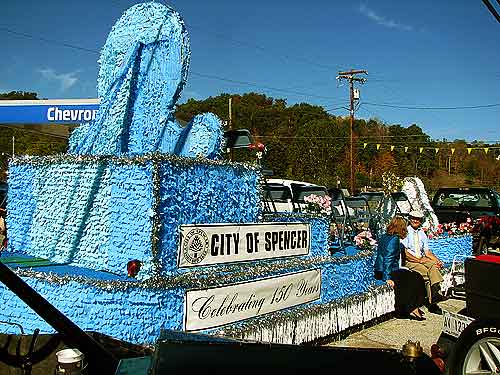 And the traffic mysteriously disappeared–I think they must have blocked the road then–and it was time for the parade to start. 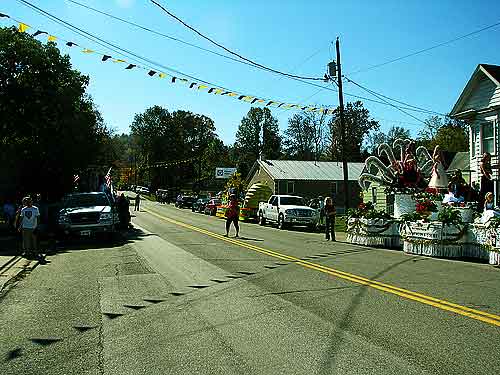 Look! There was room for Clover and Coco! I should have brought them. 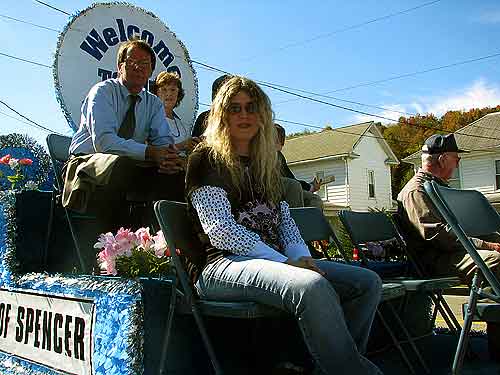 And right about then they discovered they had no one to drive the float. 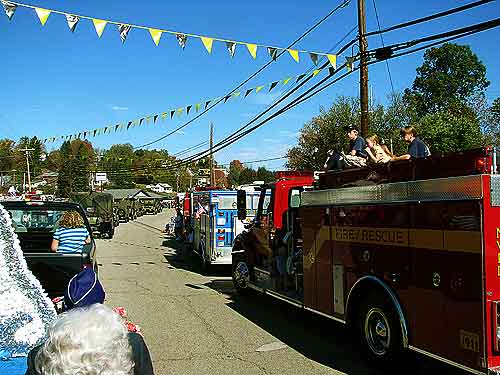 I don’t know if they pulled a driver off the street or what, but we finally got going, pulling in to head toward town behind that convoy of Army trucks. (That convoy that was #8. Because we were #9.)

I was still kinda wishing I was riding in the Army truck. Or maybe on that fire truck. 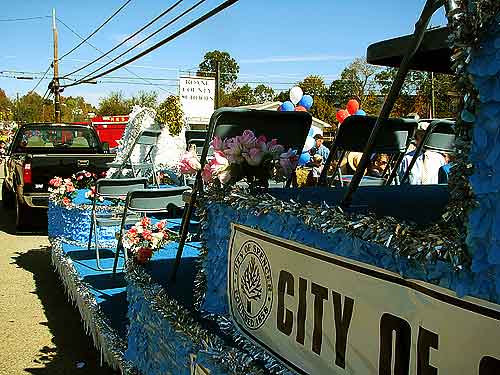 The little kids along the parade route were the most fun. They were waving and yelling. As I took this picture, this little boy (pointing) was saying, “They’re dandy!” 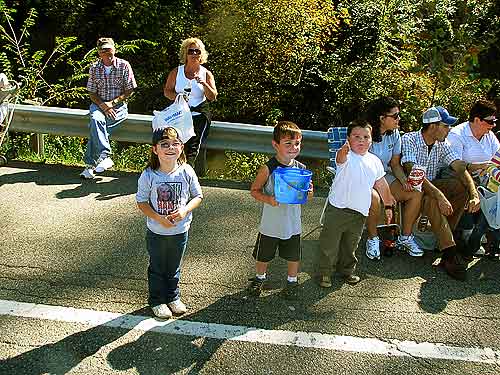 These kids (below) were saying, “Where’s the candy?” They’re all ready with their Wal-Mart bags to scoop up loot. I would have brought candy and figured out a way to attach business cards with my website URL on it, but the same letter that told me to meet at Washington Park at 11:30 and that I was on float #11 also told me to not Not NOT bring anything to throw.

I was trying to be well-behaved. But I wished I’d brought some candy anyway. 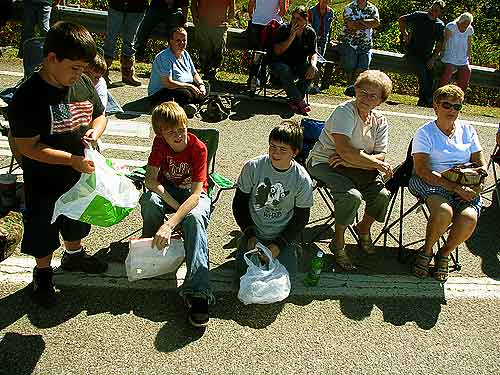 The float turned the corner and headed for the town square, where the real crowds lined the street. By this time, I’d perfected my parade wave and didn’t even feel ridiculous anymore. Like riding through town on a big blue float waving at people was totally normal. 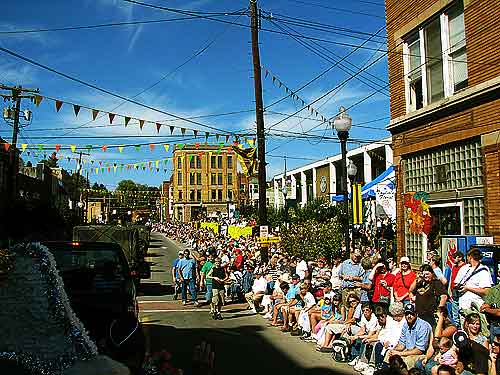 What is that I see in the distance? 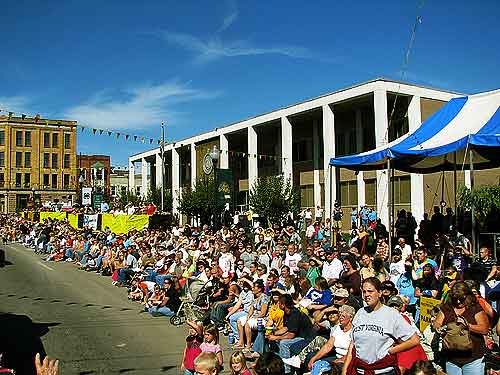 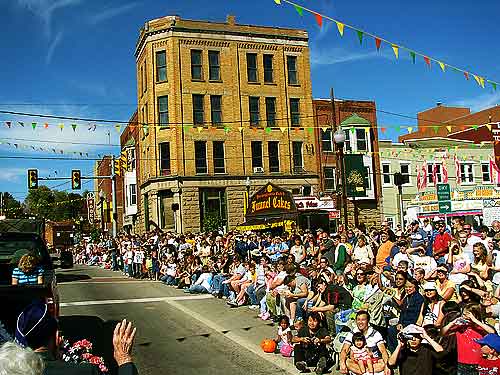 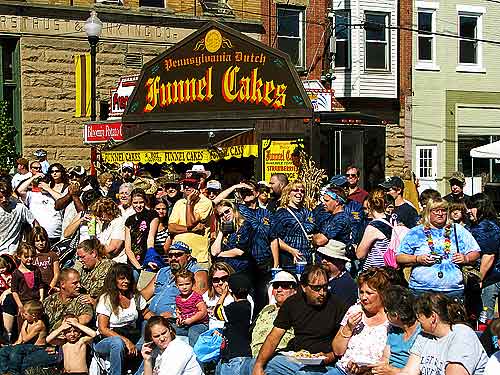 I almost bailed out right there. “Thank you for the ride to the funnel cake stand, but I have to go now.”

I managed to maintain for a few more blocks to the other side of the town square. 52, Princess, and 15 were in the crowd. (17 had other plans with his girlfriend.) I handed off my camera and 52 took this photo before running alongside the float to hand it back to me. 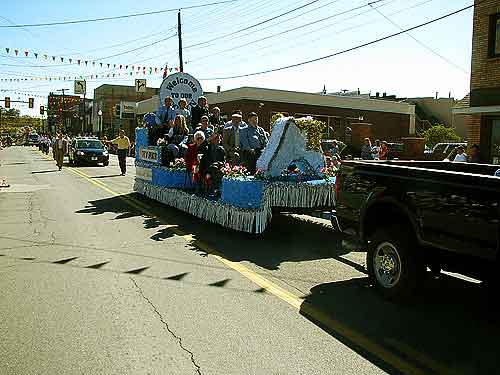 I hopped off at the corner before the float headed for the middle school parking lot and met up with my people. 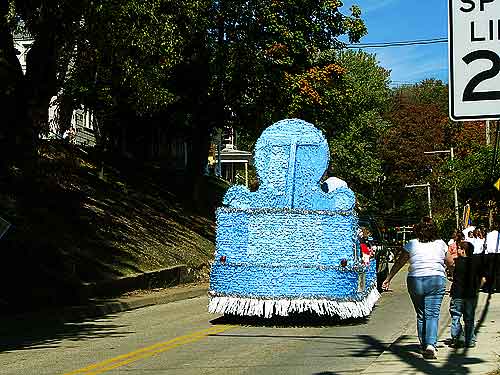 We headed straight for Georgia. 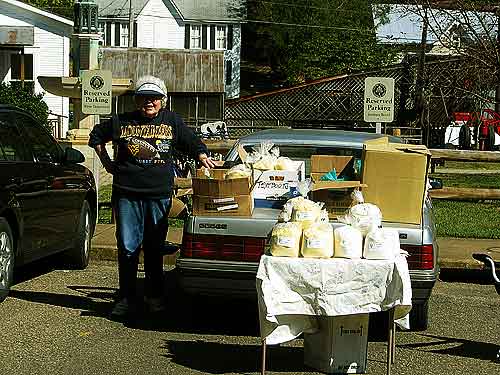 She was manning the cornmeal stand while my cousin, who is running for re-election, was also riding in the parade. 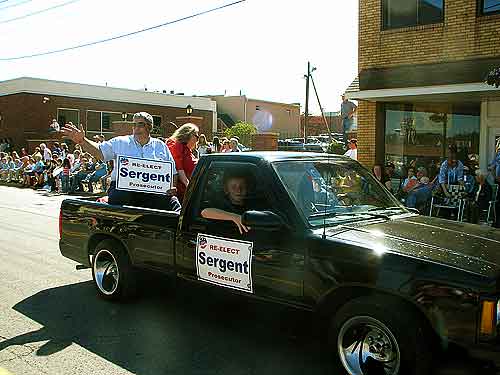 Georgia showed me her parade wave. 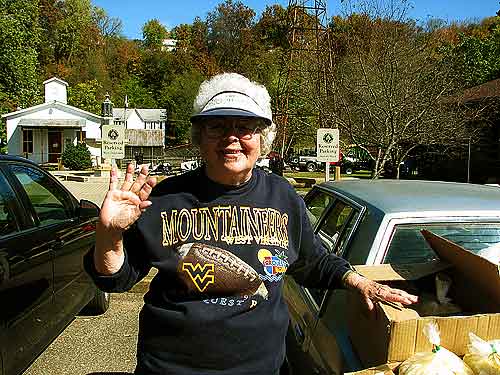 I think they should put Georgia in the parade next year. Me and Georgia. Thelma and Louise. We’ll hijack this Army truck, get all liquored up and go careening through town throwing candy tied to mini-sacks of cornmeal, Clover and Coco at our sides, Spartacus crowing from the top of the truck. 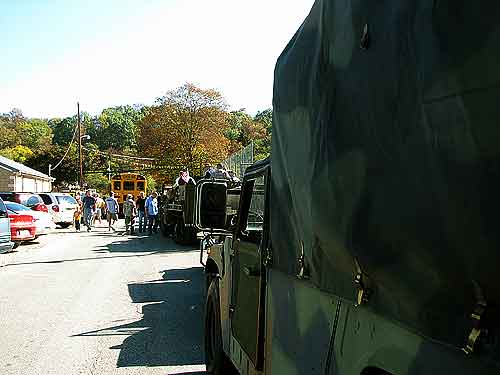 The children will say we are so dandy.

I’ll tell Georgia what we’re going to do, and she’ll say, “We are?” and then bustle off to make pumpkin butter or something while my-cousin-the-prosecuting-attorney says, “Are you finished with your nonsense yet, woman?”