I finally got out with Shortcake yesterday, taking a riding lesson with Adam after he finished the deck. Since last year, he has become my go-to hired man for everything on my farm and he often comes up with great ideas that I would never think of on my own. He’d never seen the part of the farm beyond the second upper pasture, so I wanted to show it to him and I wanted to check it out for riding potential, also.

I’ve only been up there once myself, just enough to inspect it briefly and come to the conclusion it wasn’t going to be useful to me for livestock. After that, I’ve been too busy focusing on the land I have that is useful for livestock to go back.

We clip-clopped out the driveway and up the hard road along the farm to where it turns to a gravel road. The horses did not like the gravel road at all. He told me to have shoes put on all four feet on the horses before I take them out there again. The horses kept wanting to go in the grass alongside the road. I’d worn shorts, so Shortcake scraped me up with briars for a bit then the road turns to more dirt than gravel as it goes along. 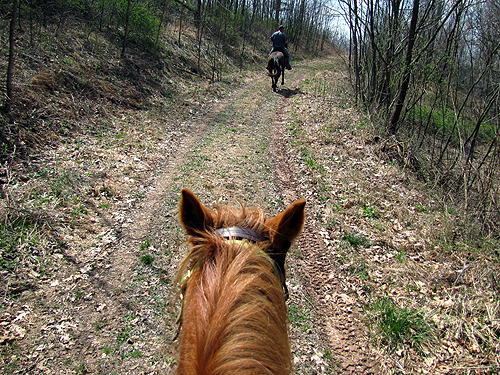 A little way’s up, we came to the road that leads in to this far upper piece. There’s a clearing with a gas well, and a section of woods where Adam tied Zip to get off and look down over the farm. 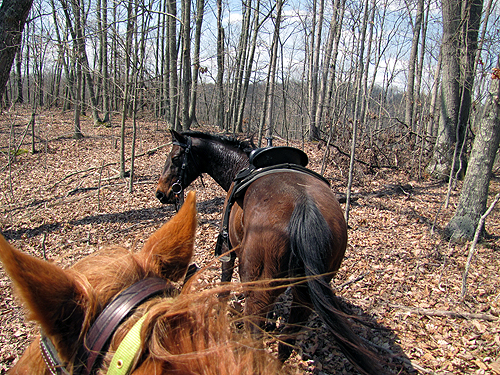 He wanted to be sure we knew where we were in relation to the upper pastures. This rock overhangs the end of the first upper pasture. 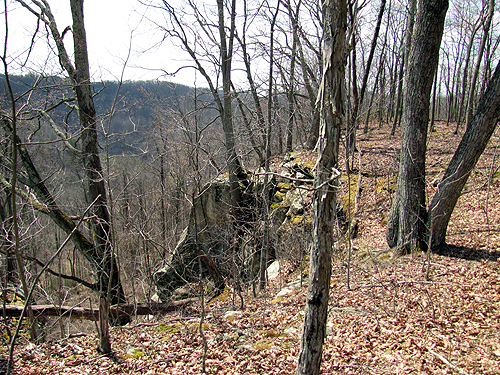 There’s a gas company road leading off back in the other direction, which carried us along the ridge over the second upper pasture. (The field we were fencing last week.) 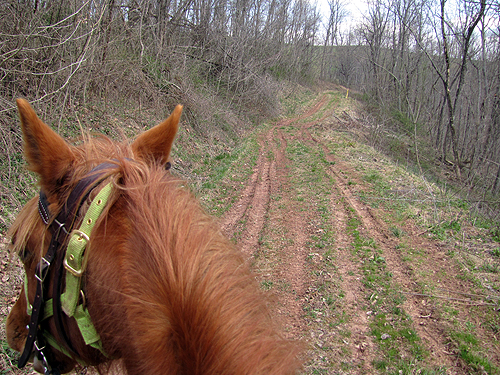 It’s quite a way down through there, the path kept cleared by the gas company. At the end, there is a second gas well. 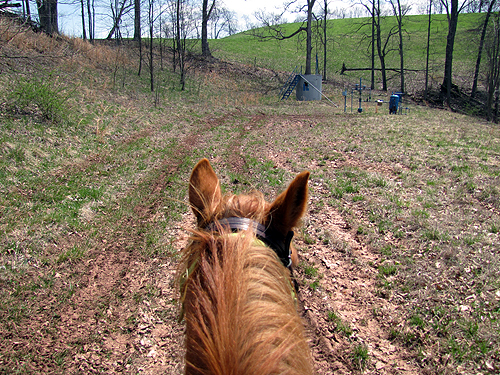 See the cleared green field beyond? There is a fence line there and that is the large cattle farm that stretches from here all the way over to the next road. (It is a HUGE farm.) Adam asked me if that fence line was my property line. We’d gone so far, I couldn’t believe it could be. I really had no idea where the property line was up there. I’d never been interested in that part of the farm before, and I’d had no idea there was such a nice riding trail there. Adam found a place where he said he could clear a path to connect the trail down to the second upper pasture, giving me a way to ride up there without taking the horses on the road if I wanted to, or I could use it to make a circle instead of backtracking on the ride. It was a nice hour’s ride up there, quiet, and beautiful. Definitely a place I wanted to ride often.

We clip-clopped back down the road to the drive. 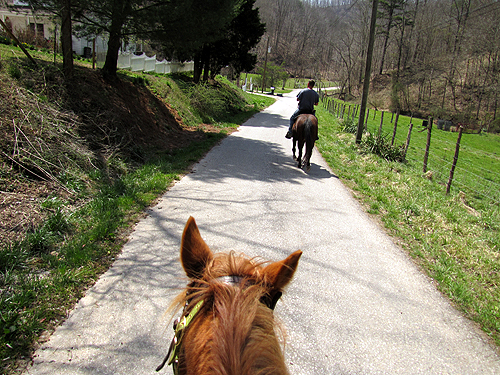 Later yesterday evening, I talked to my neighbor Jim, who grew up here, and asked him if he knew whether or not that fence line to the cattle farm was my property line. He said that indeed it was! Wow.

I’ll call that my birthday present. Today is my birthday, by the way. Everyone finds this out on Facebook somehow, so I might as well admit it. But if it’s okay with you, I’m about to where I’d just as soon pretend it’s not happening!