I knew a man who often gifted me with things that were out of the norm, not something you’d find in a magazine gift guide for sure. An elderberry bush. A vintage KitchenAid. A box of day-old goslings. A cow. He was thoughtful at keying in on just the things I wanted, but wouldn’t buy for myself. He was endearing at such times, boyish and excited about his surprises for me.

His behavior toward me grew increasingly angry and irrational between briefer bouts of sweetness, a pattern which began as soon as we moved to Stringtown Rising. He told me that he felt jealous of and threatened by the growing popularity of my website, and frequently criticized me and mocked readers’ admiration of my work. “Your readers think you’re wonderful,” he’d say. “But you’re not wonderful at all. You’re a selfish, selfish person.” If that was said to me once, it was said to me two hundred times (among other similar diatribes), the only apparent goal being to tear me down.

I have never spoken of my personal life and relationship during the time I lived at Stringtown Rising, or explained exactly why I had to leave. But now you know. Aside from my fear of living at such a difficult, remote farm alone, I was afraid he was going to destroy me from the inside out. It was writing this website, ironically the same thing he used against me to mock me, that at the same time saved me. Every day, I got up with a mission to write perky, positive, informative, inspiring posts. I wanted someone to live the good life–even if that someone couldn’t be me. He came home every night and derided me and mocked me and attacked me. He was one person in front of other people, and a different one when we were alone. I was silent in response to him most of the time–and I was silent to almost everyone around me. I had kids at home, so I was afraid of escalating any given situation, so I was very, very quiet, and mostly tried to stay out of his way. When he started ranting, I’d slip away to bed and hide. And get up the next day and write something for you. Thank you so much for being here. You have no idea how much I needed you.

My cousin and his wife, Sheryl, knew from the beginning. Eventually, I also confided in my dear friend here that you all know as CindyP.

And also eventually, I couldn’t take it anymore. I knew exactly what was happening–verbal abuse and mental cruelty–and I was ashamed that I was allowing it. I allowed it because I was afraid of losing my farm, and I was afraid of losing my job writing about the farm. I loved that farm and I was so determined to hang on to it. The night he came home and told me that he wasn’t going to pay his half of the mortgage anymore, I snapped. I told him I was moving out.

I didn’t even know where I was going, but I knew I had to leave.

In a similar way, when I realized he’d stolen the stove that had been donated for my workshop kitchen, I snapped. While stealing the stove is technically a theft, morally, it’s an act of domestic violence, and I knew I had to stop being silent–because this is where silence had gotten me so far. It’s not just a stove. It’s the stove that broke the camel’s back. It’s a final act in a long line of abusive acts. And what abusers count on is your silence and your shame.

So many women read this website, and I owe it to anyone who is reading this today who needs to hear it to say, GET OUT. LEAVE. There is nothing that is worth keeping in comparison to losing yourself. A person doesn’t have to hit you to hurt you. Mental cruelty and verbal abuse is actually far more violent and creates much longer-lasting damage. I stayed for nearly four years, trying to save a farm that I could never save because he owned half of it and the games would never end. He played with me every night like a cat with a mouse.

I found myself feeling suicidal because life was no longer worth living, and I knew I was in big trouble. I thought I was so strong that I could ride it out, tolerate it, to save my farm. But no one is that strong. If someone is tearing you down, GET OUT.

All you can ever save is yourself, and you are worth all the trouble.

This morning, flowers are blooming on the trees here. 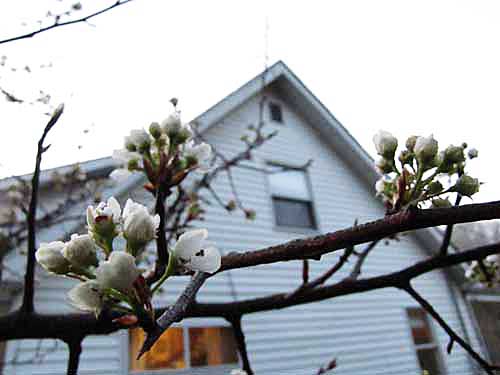 No one yells at me here. I like it very much. There is hope and a future. If you are in a situation like I have described or similar, please leave. It will not get better.

UPDATE: If you’re reading this post at a later date, you can see the return of the stove here.