After being snowed in for most of two weeks, I was encouraged by a brief bout of warmer weather that at least turned the snow-covered road to something more like icy slush. I had gotten my car down to the bottom of the driveway, and I had found one of my sets of car keys. I had lost my “regular” set of car keys and then my spare car key while snowed in. (No. Really. I lost BOTH.) One tends to forget about things like car keys when you can’t go anywhere. I’m sure the cats were involved as I tend to leave my keys on tabletops and they like to knock things off and throw them around until they disappear. I threatened to line all eight cats up and question them, but I could never get them together.

But, one car key found, I set off a couple of days ago TO VISIT THE WORLD. And see if it was still there. First, I had to pick up the children from the old farmhouse where they had gotten off the bus because school was finally back in session after a week’s wintry hiatus. There was no way I was going to traverse our still somewhat snow-covered road, two and a half miles over the hill and through the woods, which would be the shortest route. The 4WD on my car had decided to mysteriously give out IN THE MIDDLE OF WINTER. So, instead, I forded the river (which is the long way around to the old farmhouse). First, I walked down there to look at the river because the road was still kinda icy and if the river was too high, I didn’t want to have to back up to our farm. The Ornery Angel‘s husband has a set of rocks he goes by to tell if the river is okay and he had told us about them. I could see his rocks. All right! World, here I come!

Morgan had a basketball game and I was determined to sneak out to Wal-Mart during her game, but I came home first to drop off Weston. And change my clothes because I had forgotten to PUT REAL CLOTHES ON since I had not visited the world in so long and I was wearing long johns, a t-shirt, and a sweatshirt.

Anyway, by the time I came back home and forded the river again, the rush of snow melt in the day’s briefly balmy 50 degrees had caused the river to rise. I forged ahead and made it across, but no sooner did I come up out of the ford than my car died. After a few seconds of panic, I managed to restart the car and get it to the driveway, where it died again. I must have gotten some water in the engine when I went back across the river. I told Morgan, “We can’t go back out for your game.” The balmy temps were predicted to quickly pass and more snow was on the way. My car was going to be all right, but I didn’t want to risk the river again. If I went back across the river and it killed my car, we’d be stuck, across an icy river, with no way to get back to our farm. And it was about to start snowing.

The drama! She was letting down her team! (It was Walton, the little town in the county, playing Spencer, the big town in the county. It was Very Important! If you’re 13 and you live in Walton and you have to DEFEND YOUR TINY TOWN.) I said, “I WAS GOING TO GO TO WAL-MART! YOU ARE NOT THE ONLY ONE IN PAIN!” In the end, we walked up the driveway and called my cousin. He agreed to come as far as he could get his (non-4WD) car down the road (which isn’t far) and take her to her game. She ran two miles in the snow to meet him.

That’s devotion to basketball if I ever saw it. (Walton won!)

The next day, the river down again, I was hopeful to try to get out–only my car was stuck. Without 4WD, it would not move from the driveway. Then yesterday, it snowed. All day. I am snowed in, stuck in, flooded in, iced in. I have heat. I have food. I have internet connection. I have water. I’m a little concerned I might run out of wine.

But don’t be worryin’. There’s a lot of vodka in that homemade vanilla and don’t think I haven’t been thinking about it.

Luckily, I like staying home and I love living on a farm. 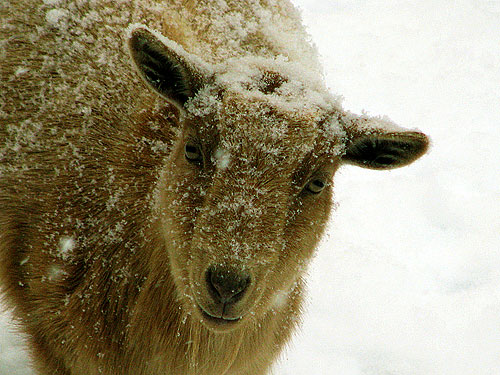 P.S. The boys can get to school because The High School Senior has 4WD. If he cared about his mother, really cared, he’d take her to Wal-Mart, but he has a girlfriend and a job, so don’t be expecting to see him between the hours of 7 am and Never.

P.P.S. The basketball fanatic moves in with Georgia whenever she needs to so she can get to school and basketball.

P.P.P.S. I’ll try to stay out of the homemade vanilla. But I’m not making any promises.