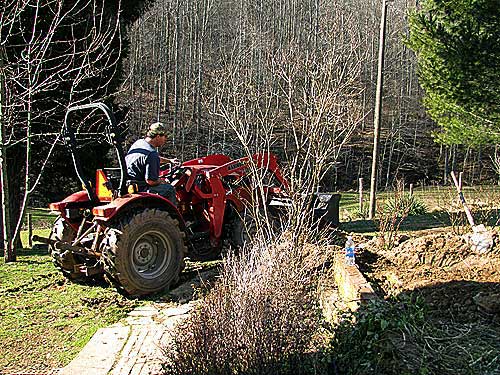 At least somebody is driving the tractor.

I was hoping to post about something exciting today, but I’m temporarily held up on a teeny tiny technicality, so I’ll post as soon as I can. (I’m NOT moving. I feel like I need to say that all the time now, sorry.)

Meanwhile, back at the studio project, Dave and Matt are working away. 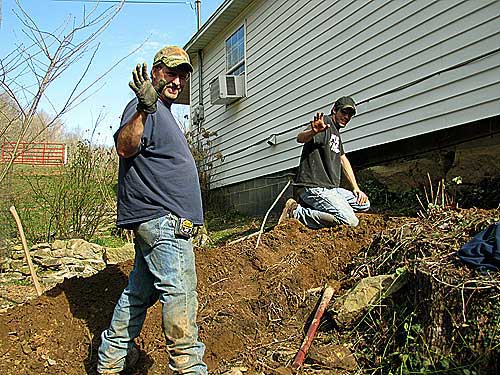 They got the water line trench dug and were ready to push the dirt back in. Dave said, “I see you have a tractor over there.” He wanted to know if he could use it. I said, sure, someone might as well use it.

I told him I didn’t know how to drive it. He asked me if it came with the farm. I said, “No, it’s mine. I make monthly payments for it and everything. It’s not even paid for.”

Dave’s face took a quizzical turn. “You’re paying for a tractor and you don’t know how to drive it?”

I mentally browsed all my excuses and went for the meat. “My brother died on a tractor.”

We don’t need to go into the fact that my brother was 16 years older than me and died three years before I was born, which might somehow blow up my unreasonable fear of tractors due to unborn status in relation to the actual traumatic event. When you have an unreasonable fear of tractors, there’s not actually a good excuse. I could explain the whole thing about the creepy life-sized painting of my brother hanging in our house during my childhood painted from a photograph taken near the time he died, but that would just make me sound more wacko.

Meanwhile, I accompanied Dave to the tractor, told him to put the doohickey in there and then start it and handed him said doohickey to show him the special trick start.

Dave: “You mean a screwdriver?”

For some reason, you have to stick the doohickey, or screwdriver, in there, wherever, then you start it. I’m not sure how this works and didn’t do a very good job of explaining, but after I pointed wildly and vaguely repeatedly, Dave figured it out.

And I watched him toodle on over around the side of the house thinking, I have no idea how much fuel is in there and I hope he doesn’t run out and have to leave it sitting in the front yard.

Some days I feel like less of a farmer than other days.

However, I did twist my cousin’s arm and wrangle him into the store this week and get him to help me pick out a drill. A drill of my own! My first tool!

I’m gonna take it out of the box any day now.