I mentioned something about a neighbor one day and a friend said, “But I didn’t think you had any neighbors.” In the country, if you live on the same road, you are a neighbor, even if you live five miles away. If you get sick, they’ll visit you in the hospital. If you die, they’ll bring a casserole to your family. If you get arrested, they’ll tell everybody who doesn’t know already. They’ll plow your garden, fix your car, and sit on your porch. If you’re lucky, they’ll even build you a house.

I’d heard of Steve-the-Builder before. I’ve heard of everybody in this whole town because Georgia knows everybody and has brought them all a pie. Half the time, I drive her there so she can take them the pie, so she thinks I know them all, too, but I am easily distracted and I don’t take in everything she tells me. Which leads to her coming over to the farmhouse (without knocking, of course) and saying things like, “That man we’ve been waiting on just hasn’t died yet.” Then I stand there, all bewildered, trying to figure out whether to say, “What man?” or commisserate on the time it’s taking him to keel over when everyone is ready with their casseroles.

Steve-the-Builder lives about a mile up the road on a big farm owned by his father-in-law, Lonnie. Lonnie cuts our hay meadow behind this old farmhouse every spring and fall, which is all I knew about Lonnie and family until recently. Lonnie has a lot of cows and horses. I think he’s cool because he has cows and horses. It’s a typical West Virginia multi-generational family farm, meaning everybody lives there: Lonnie, Steve-the-Builder and his wife–Lonnie’s daughter Londa, and their two grown sons. 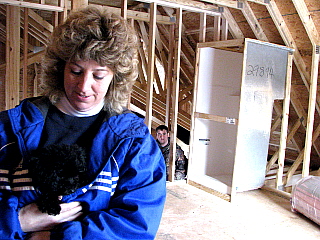 Londa has two teacup poodles. She is cute as a poodle, too, and she does a perfect parody of the “Maury” show. You haven’t lived unless you’ve heard her say, “I know he is my baby’s daddy!” She also understands my outhouse obsession and she takes me to see outhouses.

They are all longtime friends of my cousins, but because I am easily distracted, it took me a while to figure out that Steve-the-Builder would be the perfect person to build our new farmhouse. Who else would drive through three creeks to get to our farm but someone who lives out here, too? He drives the two miles to our new farm from his farm every day, working from dawn to dusk, building it from the ground up with no help but from his own family. He is a full-service operation all by himself and he won’t let anyone work for him but family–unless he is building your house, then he will let your teenage son work for him, too, and teach him all about construction. I think he will have his own cartoon soon, Steve-the-Builder, like Bob-the-Builder. Or maybe something more MacGuyverish. I think if you were stranded with him on a deserted island and you gave him a toothpick and some wire, he could build a plane and fly you out. I think he can do anything. No matter what I ask him to do, he says the same thing: “That ain’t no problem.”

He’ll build your house as if he was building it for himself. 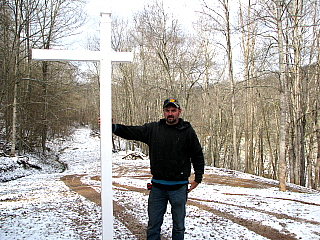 He’ll work on your car when it breaks down, and he’ll take you to the store and buy your daughter M&Ms. If you accidentally, stupidly, get your car stuck, he’ll pull it out. And if you’ve really screwed up, he’ll get his brother to tow it away. (Let’s just not even talk about this whole debacle.) He makes really nice Christmas presents, too. (A signpost for our new farm.) 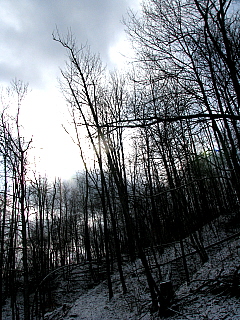 And if you’re really extra lucky, he’ll become a lifetime friend. And let you come over and pet his horses and cows and hold his teacup poodle.

And that’s getting a house built in the country. It’s different here–beautiful, in so many unexpected layers.

As I’ve heard Steve-the-Builder say many times, standing in front of our house surrounded by the woods and hills, “If people just came out here, they’d never want to leave.”