I’m not a hoarder.

I’ve moved many times in my life–several times during childhood, several times during my marriage, and several times since then. Repeatedly moving causes you to repeatedly evaluate your stuff because you have to pack it. My last move was to this farm, and the house here is very small (1300 square feet). The size of the house caused me to be even more hard on myself as I packed, and I got rid of a lot of stuff. I like getting rid of stuff. I find it very liberating. I don’t like clutter, and my children will thank me later when they’re not backing a truck up to the house after I’m dead.

Ninety-nine times out of 100, I never regret anything that goes away, or ever think about it again. This past week, Morgan brought up a book she needed for a college class she’s taking. I told her I’d had that book in college, and that I would take a look in the (very small) attic here and see if I still had it. I remembered getting rid of my old college books before I moved here, so I doubted it, but you never know, I might have kept one or two, I couldn’t remember for sure. Nope. All gone. Which was okay–she found the book available on Kindle now, which is a more space-saving way to keep it. Still, it was one of those rare moments when I felt a twinge of regret over something I’d gotten rid of, though the twinge went away quickly. I’d rather get rid of stacks and mounds of boxes and books than keep it all for that one needle in the haystack I might ever want again.

(This is the opposing viewpoint to the hoarder, who would rather keep stacks and mounds of boxes and books precisely for that one needle in the haystack, and they don’t know what is the needle, so they have to keep it all. Just in case!)

Anyway. I have a point! And that wasn’t even it!

I have maybe half a dozen boxes in the attic, plus some Christmas boxes, and oddly, five sleeping bags that belonged to the kids. (I have three kids and five sleeping bags?) I took a look in every box, just to see what was there. (And decided I really needed to throw some more of it out, but I was involved in a different project that day, so didn’t want to take the time.)

In one box, there were some papers and old letters, and flipping through, I saw the return address of the Justice of the Peace in Quartzsite, Arizona on an envelope. The date stamp was 1982, and it was addressed to me at my parents’ home in California.

I hadn’t thought of that letter–and that incident–in years. I was 17 years old. I’d been going to college at Abilene Christian University in Abilene, Texas. I was a sophomore. (I started college when I was 16. That’s another story, though I could swear I’ve written about that before. Abridged version: I was smart. Then I got dumber. The End.) My parents lived in California at the time, and one could ponder the wisdom of sending a 16-year-old 1200 miles away to college, but I’m sure they had the best intentions. I, however, had alternative intentions and a fake I.D. that I ordered from the back of a magazine which hiked my age to 21. As you can imagine, college worked out accordingly. By the spring of 1982, not long before my 18th birthday, I was on the road back to California with my 19-year-old sister and the remains of the 100 dollars the dean of the university kindly gave me when he kicked me out after two years of partying and non-attendance. Having spent most of the money at a bar the night before leaving town, I was headed west in my Toyota Tercel on fumes. I could barely buy gas with what I had left, much less any food. Despite the fact that I knew my parents would be waiting for me at the end of the road with–shall we say–unhappy faces, I was in a hurry to get home.

The interstate going west was flat and straight, and my stomach was growling. As was my sister!

This story would be more exciting if we’d run out of money, stopped at a remote pueblo and spent the rest of our days in deerskin moccasins dancing for the head priest. We would be called The Lost Girls of the Pueblo and it would be a Discovery Channel special.

Back to the facts–I was zooming along at around 90 miles an hour when the state patrol stopped me near Quartzsite, Arizona. I got a really big ticket, which required me to appear in court, and we went on our way. I arrived home in Anaheim with probably about ten cents left and my gas tank on E. A few months later, I got married, and my parents breathed a huge sigh of relief (at least in my imagination–whew, she’s someone else’s problem now!).

Before leaving California, I had received a letter from the Justice of the Peace in Quartzsite stating that I had failed to appear in court and unless I paid the new–higher–fine for my non-appearance (not to mention the original fine, which I also hadn’t paid) immediately, a warrant would be issued for my arrest should I be found in the state of Arizona. 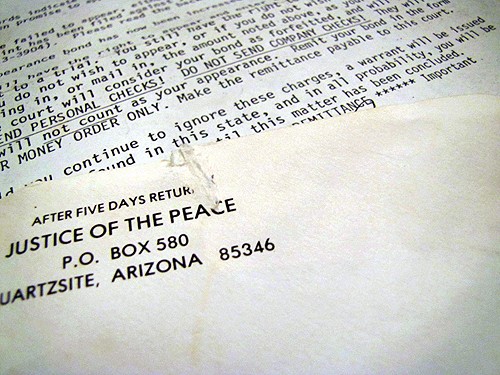 Naturally, I ignored this letter.

I drove through Arizona a number of times after this incident, visiting my parents. I drove very carefully. Eventually, my parents moved away from California, and I haven’t driven through Arizona since then. Or thought about the warrant. Until I peeked in that box in the attic a few days ago.

I wonder if there’s still a warrant for my arrest in Arizona?

I don’t know the answer to that question (and I don’t think I want to find out), but the letter also posed another question. Why do I still have the letter, considering everything else I’ve gotten rid of in every move I’ve made since 1982? Surely there’s a reason!

Morgan provided the answer for me when I showed her the letter this weekend.

Morgan: “You have a warrant out for your arrest. It gives you street cred.”

Maybe I should frame it!