I had a surprising feeling at the end of the day yesterday after this (and this). I received a lengthy Facebook comment on my CITR page suggesting I must feel guilty for not saving the fawn, which included this statement, “…and you do have a book coming out.”

Let me say first that the day I temper what I write on this website because of a book, an advertiser, or even a reader, is the day this website goes black. I keep parts of my personal life private at times, but what I share of my life and my farm, I share true, and that is the sacred trust between me and you. My book is, in fact, even more than this site just because I share more of my personal life in it, and that again is the sacred trust between me and you. I will not put out a book that is a regurgitation of what you can read for free on my website. The book is MORE. I couldn’t live with myself otherwise.

But back to feeling guilty. Did the fawn die because I took photos of it with my zoom while I was assessing the situation and deciding whether or not I should make a potentially dangerous intervention between livestock guardian dogs and a wild animal? Unless you were here with me, you really can’t know. I had a hard enough time deciding what was prudent, necessary, and wise, and I was the one in my shoes. At this point, it doesn’t really matter. I’m a human being, and it is what it is. (Honey Boo Boo’s mama likes to say that. I love Honey Boo Boo. When are they doing more new shows???)

There wasn’t a lot of time for thinking yesterday morning. I took a few moments for thinking while I was zoomed in with my camera on the situation, deciding whether or not I needed to intervene. And again when I stood in the creek with the fawn, deciding what to do with it. The rest was pure emotion. By the time I got my boots on and got back to the field, they were on the steep part of the field that goes up to the upper pasture. Even with boots on, the footing is unstable. I took hold of Chloe the only way I could, by her ears. (Somebody is going to criticize me for this.) When in an emergency situation, taking hold of any small livestock by their ears is often your best bet. (We’re not in the ‘burbs, Toto.) This is not kissy-sweet time. It’s emergency time. And a 100-pound dog is stronger than me, I can promise you that, and if I’m going to get a livestock guardian dog off a wild animal, I’m going to do it any way I can. I can’t pick up a Pyr, and I can’t tell a Pyr with a wild animal in its field to do any different than it is born to do. But I can take hold of its ears, control its head, and by controlling its head, control its body–with my feet dug in, pulling with every ounce of grit in my body to convince them to follow their ears when every ounce of grit in their body wants to go back to that wild animal. It was a tug-of-war with Chloe, and then with Gwennie, to get them out of that field and away from that fawn. I carry 50-pound bags of feed, and hay bales, and I walk/run 5 miles a day. And I’m still not stronger than a Pyr, but I made them move by force of will.

Then I stood, boots in the creek with that fawn in front of me and Chloe, escaped, behind me. I lectured Chloe, I entreated the fawn. Eventually, I stood with Chloe behind me and that fawn not six inches in front of me. I have never touched a fawn in my life. And I didn’t want to touch this one. I wanted it to get away clean, untouched by human hand. But as that dream dimmed, I knelt down in the creek, looked the fawn in the eye, and knew if it would let me touch it, it was bad enough that I needed to carry it out of there. I reached out, cautiously, and put my hand on its head and it didn’t move. I had no idea how heavy it would be. It felt like about the weight of a sack of feed. I got it all the way to the front of the field then I had to get the gate open. I put it down for a second and managed to open the gate and get it through and on to the house, where I was ready to drop.

Only then did I bang on the back door with my boot until I woke up help.

And through all the people who want to second-guess every move I made in a dramatic unexpected event, in the end there is one emotion that they can’t take away, and that is pride. I get a lot of help on my farm. Hired men, kids, neighbors, friends, family. Maybe I’m not so tough. It’s not like I really run this farm alone. But in the end, in those dramatic unexpected moments, I’m the one who has to step up to the plate because there’s no one here but me.

It’s these unplanned adventures that test your mettle on a farm. There are many ways to test yourself in life, and a farm is not required. What is unique about a farm is the challenge of you against an animal. When Glory Bee decides she doesn’t want to walk on a lead, after all, and drags me halfway across the back barn yard. And I take that lead back and I put that nearly 1000-pound animal through her paces til I rule her. Animals test in a special way. They have hearts and minds of their own, unlike any mechanical device.

But that is a milk cow. A livestock guardian dog is a different thing altogether, bred to think and act independently of human beings, to hold their field against all comers. Yesterday, I pulled two 100-pound livestock guardian dogs off a wild animal. I carried that animal out of the field, and when it didn’t make it, I did what I had to do next. Myself. And in the end, the emotions I felt weren’t about guilt and regret but about pride and strength.

I am tough enough. 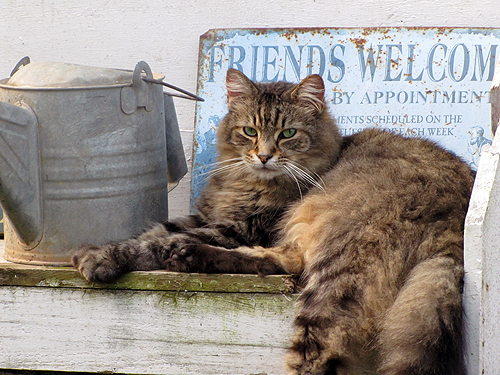 And if anyone is perturbed that a fawn died and I felt good about myself at the end of the day, I’m tough enough for that, too.