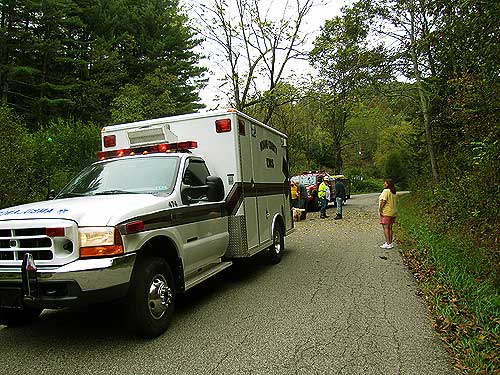 Whenever my kids are out in the car, I watch the phone, paying attention. I’ll pick up the phone even if it’s a strange number because one time, 48 hours after he got his drivers license, Ross wrecked my car and he called from a house down the road.

Yesterday morning, at I-don’t-know-o’clock, I got another one of those phone calls you never want to get. Weston had been in a car accident. With Morgan in the car, too. She was perfectly okay. That’s Morgan, in the blue shirt, standing in front of the ambulance. 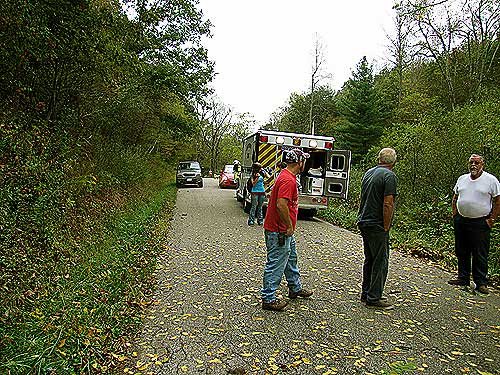 That’s Weston, in the ambulance, not perfectly okay. And yes, I have the presence of mind to grab a camera as I frantically rush out the door because I’m (unfortunately) an experienced mother of multiple teen car accidents. In this case, the owner of the vehicle is Weston’s father, and photographs of the scene is what I would want if I were a thousand miles away. I took a number of photographs of the scene that I won’t show here. Weston, in particular, was interested in what he looked like, but I promised him I wouldn’t post those. He just wanted to see, so I took pictures of him at various points and showed them to him on the LCD screen on my camera. He was meeting his girlfriend about 7 miles from our house. Morgan was going to a friend’s house. Weston’s girlfriend’s mother was dropping off her daughter to meet Weston and she was going to take Morgan on back to town with her for Morgan’s planned day with friends she would meet up with there. Weston was late, and they saw an ambulance go by, and they got concerned and followed it. Meanwhile, Morgan had climbed out of the wrecked car, followed by Weston (who was able to get out of the car on his own, climbing out on Morgan’s side). Weston was bleeding from multiple lacerations on his hands, arms, and face from the shattered driver’s side window. (Later, he even found glass in his shoes.) Morgan ran down the road till she found a house where she could call 911 and call me. She was wonderful.

Weston hit gravel on the road and lost control of the car. He tried, but he couldn’t get control of it again and ended up hitting a tree. 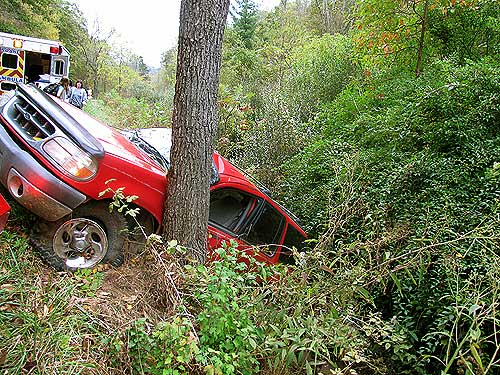 At the hospital, he asked me if his beautiful face was ruined. I was glad he was able to keep his sense of humor. (Of course, his face is beautiful, but he was just kidding.) His beautiful face is just fine. He looked a lot better after they washed off the horror movie blood that made things look much worse than they were. He had cuts all over, but the only cut that required stitches was above his eye. His girlfriend held his hand while he had it stitched. His girlfriend’s mother and two of the other mothers from their group of friends came to the hospital. I love small towns and good kids and their mothers.

His beautiful face and his beautiful body are okay. He and Morgan walked away, and that is the only good car accident there is. I still have three kids. As I told the girlfriend’s mother….. “We’re dating again!”