It’s woolly worm weather time! As the story goes, the longer the middle brown band on a woolly worm, the shorter and milder the coming winter. The shorter the brown band, the longer and snowier. This tale is backed up by studies (really) that put woolly worm accuracy at 57 percent. (Close to your average TV weatherman.)

I am in love with this woolly worm. 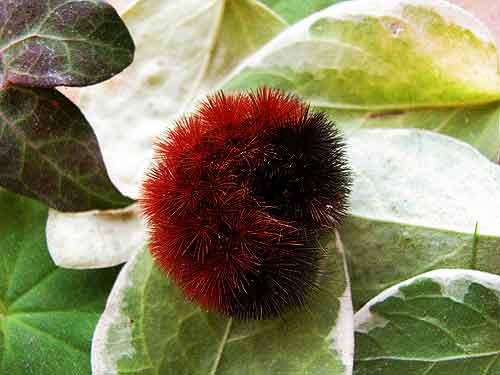 Last year, my first woolly worm spotting was a dreadful one with more black than brown. I didn’t like that one very well and tried a woolly worm do-over with the next one. It had a large brown band and I loved it ever so much. How did that work out? Not so good as I was soon experiencing life at 16 degrees in the old farmhouse.

Clearly, it is critical in woolly worm forecasting to go with the first woolly worm of the season. There is something magical, mystical, almost fantastical about that worm. It’s the scout, the leader, the one in the know. So no cheating this year. I’m sticking with my first one, my beloved, my forecaster of a short, mild winter. (This has nothing to do with the fact that I like this woolly’s prediction, of course. OF COURSE. It is simply justified based on last year’s results. THAT IS ALL.)

And you? How are the woolly worms looking in your area?