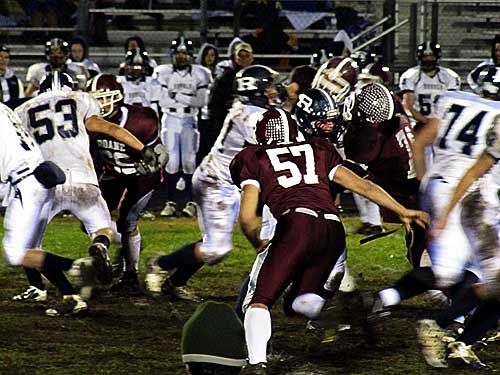 My favorite football player. Number 57. I love him.

As I near the end of my five year up-close and personal love-hate relationship with football, I feel sentimental. And relieved. Football is nearly a year-round sport, as they start after-school weight-lifting practice in January, a mere month after the playoff season ends in early December, ramping up to summer camps and summer practices before school starts and the football season begins in earnest all over again.

Weston went to football camp two years in a row at West Virginia University. He was 13 his first year.

He started playing in 8th grade at the little school in town.

Go Tigers! He was #82 (middle of the field in this photo–some of these older photos are in odd sizes and not so great…).

The little school doesn’t have a football team every year. Weston couldn’t help but make the team. They have to beg, borrow, and steal any boy with passing grades and two legs to fill the roster.

Here he is coming off the practice field during his freshman year on the high school team. (Second from the right.)

I wrote this little haiku to memorialize my stress as I drove three children around to all their activities:

Here he was fresh out of the locker room, freshman year.

There’s a cute little post associated with that photo from 2007: Behind the Royal Curtain.

This photo is from his sophmore year. (Middle of the photo, without a helmet.) 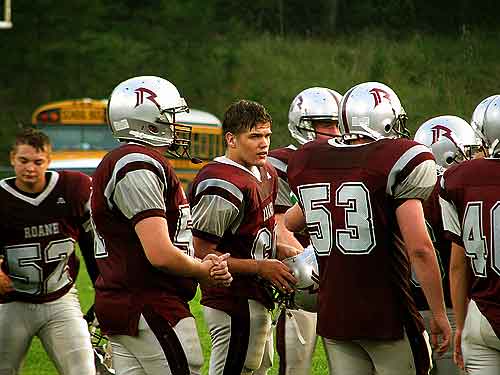 That was the first time he tried to quit football. His middle school football buddies had gone on to play at the high school in ninth grade, but by tenth, they’d all fallen away. I don’t know if it was because they decided they didn’t like football or because their parents didn’t like driving for football. It’s hard for the country kids to play sports because their parents have to drive so much farther to pick them up every day and for all those late nights after away games. (Every trip to the school and back means at least an hour for me out where we are.)

Early in the season in 10th grade, he told me he wanted to quit. I knew how much he had enjoyed football for two years already, so I pressed him for an explanation. He told me he wanted to quit because his friends had quit. He didn’t think football would be any fun without them. I told him he couldn’t quit something he loved just because his friends had quit. He had to quit football because HE didn’t like it. Otherwise, forget it, he was playing. We made a deal–he’d play sophmore year. If he didn’t enjoy it, he could quit after that and never play again. I made him go to practice the next day and at the end of the season, one fine day, he thanked me for not letting him quit. (See The Game I Love to Hate.) 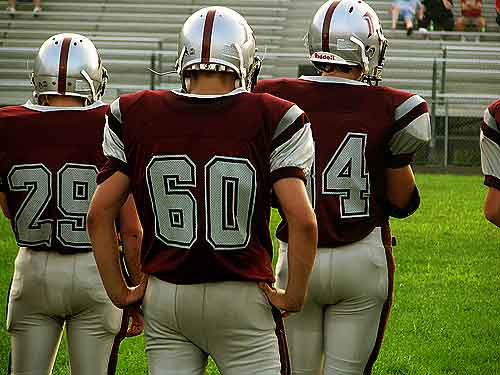 Eleventh grade was his toughest year.

It was Meet the Team night. I sat in the stadium as they called each boy’s name and they ran forward on the field. They called Weston’s name and nobody ran. They called the next boy’s name. I got up, ran to the fenceline, found a coach, asked him where was Weston? He didn’t know. (Freaking out.) I ran to the fieldhouse. Nobody answered when I knocked. I did what I wouldn’t normally do and opened the door. I couldn’t see anybody. Eventually I found the trainer–and he found Weston. He was in the back of the fieldhouse. He had an injury, had had an injury which he’d been trying to play through during practices, and hadn’t told anyone. And that night, just before the Meet the Team event, he’d realized that injury was serious, that he couldn’t go on pretending, and that it was going to sideline him, possibly for the entire season. The emotion of that realization had kept him from going onto the field. We were at the doctor’s office the next morning, followed by repeat physical therapy visits in Charleston. He was sidelined for most of the season. He was inspired and encouraged over the coming days and weeks by the trainer–who he became close to. And then a few weeks later, that trainer committed suicide. I took Weston to the funeral, at his request.

He went to every single practice, and every single game–suiting up though he couldn’t play. He cheered enthusiastically from the sidelines. 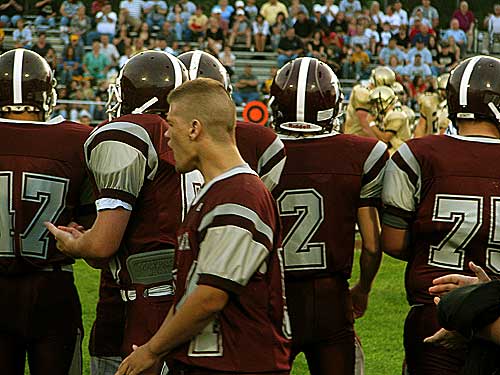 He was only able to play in the last couple of games. It was my toughest year, too. I went to all the home games, and picked him up late, late, late at night from away games–when he wasn’t even playing. But he was so dedicated, even when he was sidelined, that I couldn’t complain.

This year, at the beginning of his senior year, he tried to quit again. (He’s #57 on the varsity team.) 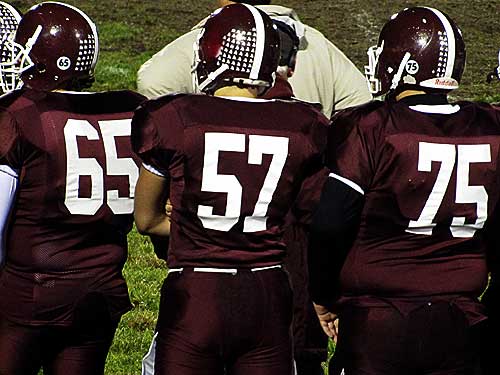 He came to me one day before school started (practice had been going on for a month by then, of course) and told me he was going to turn his things in to the coaches the next day and quit the team. I said, “WHY?” He had a car and a girlfriend. He wanted to get a job and make money. I found myself in the same tempting situation as he’d placed me in when he tried to quit in 10th grade. And had to resist the urge to tell him to just go ahead. I told him that he couldn’t quit something he loved for a car, a girlfriend, or a job. He had to quit it because he didn’t love it anymore and it wasn’t fun anymore. Or he wasn’t quitting. And besides, NOBODY QUITS FOOTBALL IN THEIR SENIOR YEAR. And I reminded him that he thanked me for not letting him quit in 10th grade just because his friends had quit. And that NOBODY QUITS FOOTBALL IN THEIR SENIOR YEAR. And did he remember that he went to every single practice and every single game last year when he couldn’t even PLAY?! We went through ALL THAT EMOTIONAL INTENSITY. Are you kidding me? You don’t do that for a game you don’t love. And he wasn’t quitting that for a car, a girlfriend, or a job.

And NOBODY QUITS FOOTBALL IN THEIR SENIOR YEAR!

(The girlfriend didn’t want him to quit, by the way. In fact, she’s in the band so she’s at every football game. It was Weston’s idea that he should quit and get a job so he’d have more money for dates.) 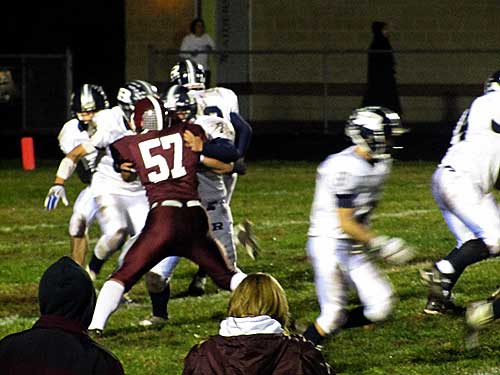 We finally made a deal. He’d play half the season. Five of the ten games. If it wasn’t fun, if he didn’t love it, if he still wanted to quit, THEN he could quit. And I gave him money for dates. 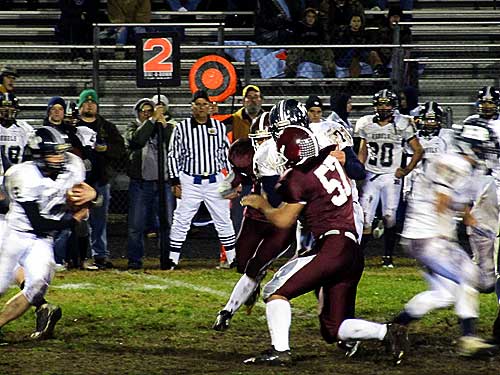 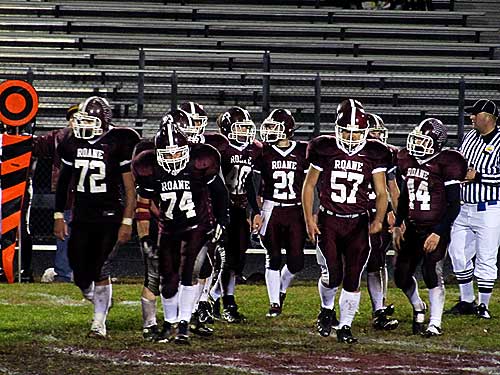 And then another five games went by. He never mentioned quitting again. 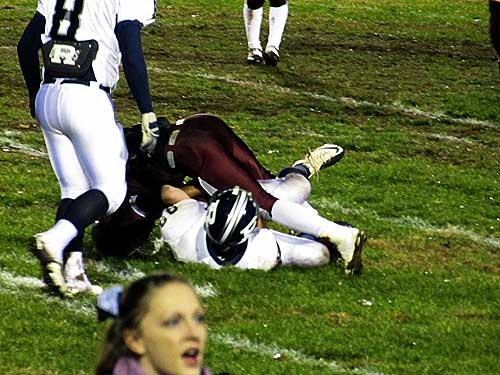 This past Friday was the last game of the regular season. It was “Senior Night” in the fieldhouse before the game. 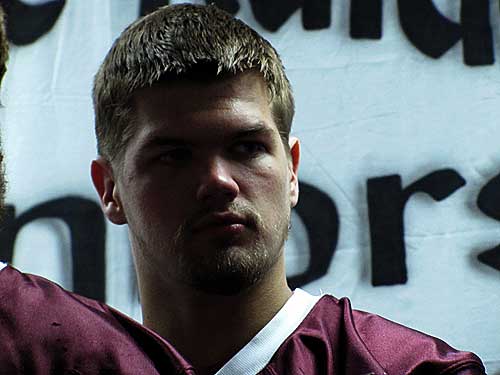 All the senior football players, managers, and cheerleaders. (Weston is third from the right, top row.) 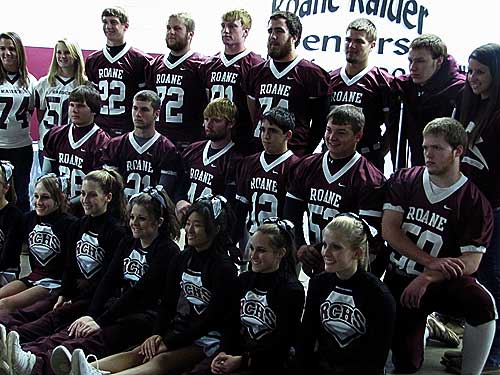 They had a cute cake with little plastic footballs poked into the top with each senior’s name. 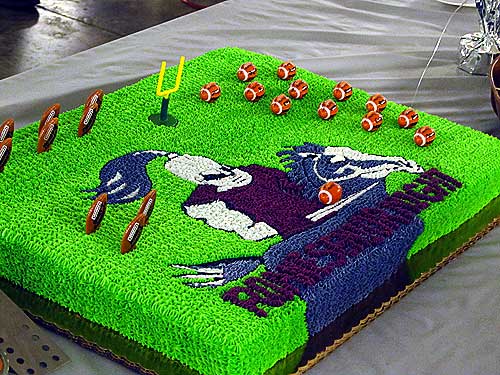 They let the parents take home their child’s little football. Five years of football, and that’s all I get! A tiny plastic football! What about my gold watch? What about my bonus points for not letting Weston quit–twice?! 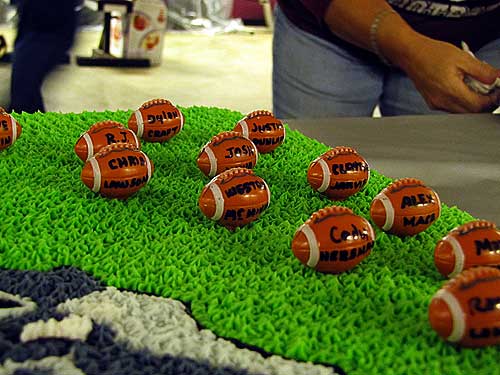 Someone asked recently about college. Weston doesn’t intend to play football in college. He’s into football for the fun. The intensity of the money, media, and competition to make it into professional sports that is all wrapped up in college sports is of no appeal to him. High school is the end of football for him. (I would never push him to continue football in college. College football is altogether different from high school. I fully support his desire to go to college for college, not for football.)

Weston’s in this pile somewhere, and enjoying every second of it. 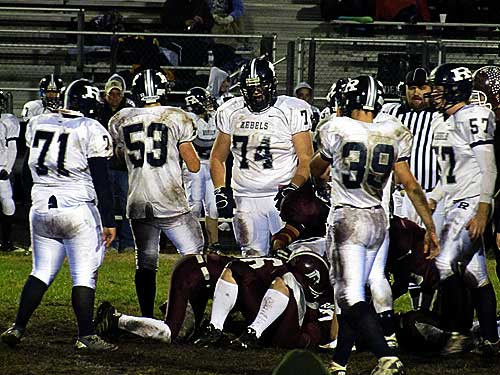 You know when they’re all crouched down like this, waiting for the play to start? I asked Weston what’s going on, if the players say anything to the opposite team. 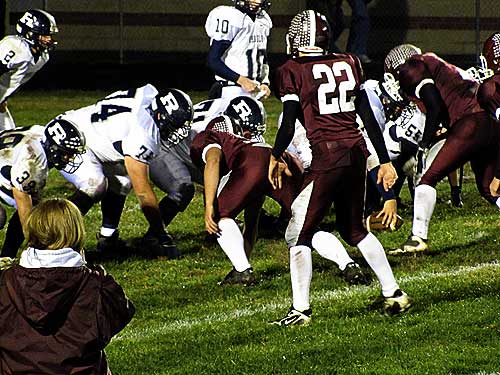 He said “trash talking” is not allowed. It’s unsportsmanlike conduct. So he sings “I’m a Little Teapot” and “If You’re Happy and You Know It” to the other team. I said, “Does that make them think you’re scary-crazy?” And he said, “I don’t know. I’m too busy smashing their faces in after that to ask them.” 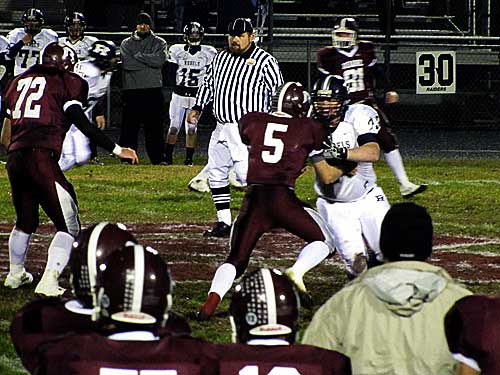 Football is such a sweet game. 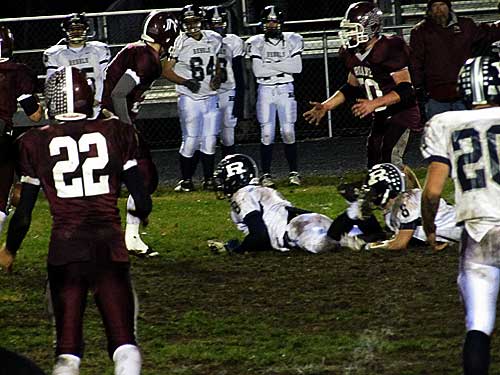 Ironically, I just recently figured out football, which has made the last few games much more enjoyable. 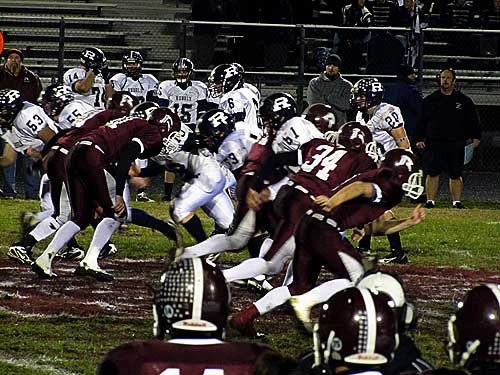 It’s so much more exciting when you at least halfway understand what’s going on. (Amazing!) 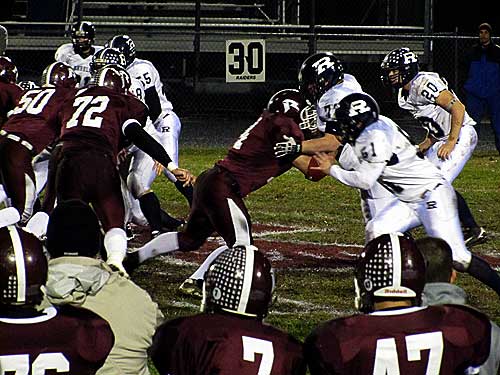 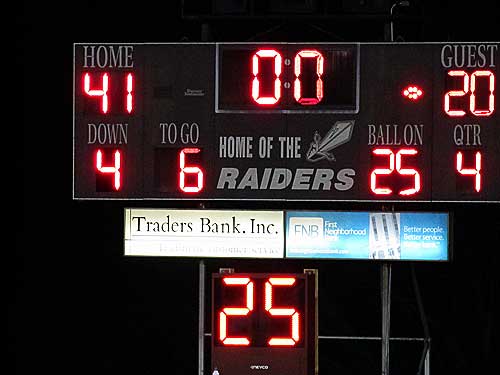 They ended the final game of the regular season, long after everyone but parents had gone home, in the annual season-ending tradition of walking hand in hand, all the players and coaches, from one end of the field to the other and back again. In total silence. It’s a weird and awesome sight. 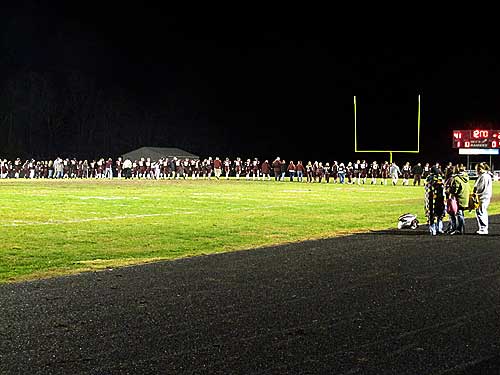 The Roane County Raiders won 8 out of 10 games in the regular season this year, setting a school record. 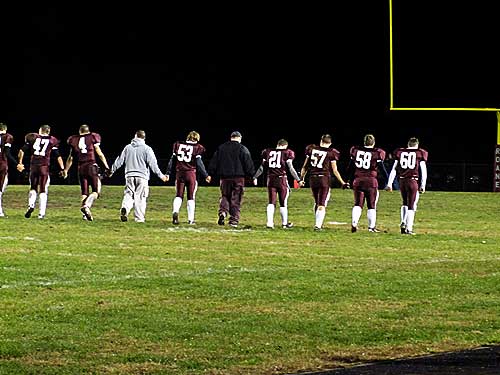 Playoffs start this week. And when the last ball is snapped, I shall retire forever as a football mom…. 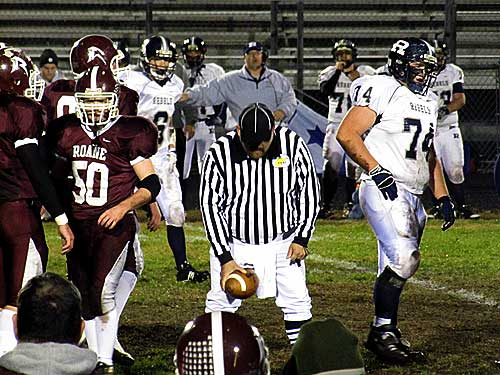 Football is a year-round commitment that is like no other, for both the kids and the parents. And while in so many ways, important ways, this is Weston’s accomplishment and Weston’s life, it is also–for every mother, and especially every single mother–my accomplishment and my life. For every minute behind the wheel, every long, cold night at the stadium, all the hours working the concession stand, every cleat sized at the shoe store and every dollar scraped together, every moment sitting in the car waiting after practices and standing shivering in the cold, cold night outside the fieldhouse after games, and, oh, for all those 1 a.m. pickups after away games, falling asleep while waiting for the lights of the team bus to appear over the hill, and for the times I pushed him through it, and most of all, for the times I pushed myself through it when I cried because I was so tired….

P.S. And to the Roane County High School football coaches–you rock. Best, and most professional, school sports experience ever as a parent. Coaches matter, and the football coaches here are THE BEST. (Thank you to Head Coach Tom Hardman and his staff.)