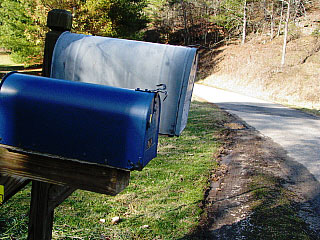 No Old Farmhouse Tour could be complete without visiting the grounds. (If you missed any of the previous Old Farmhouse Tour posts, click here and scroll down to the Old Farmhouse Tour links!) This old farm has been in the family for a hundred years and the grounds carry as much history as the house. Even the road has its own stories. This is a 72-acre farm, shaped somewhat like a butterfly, and the road crosses right through the middle of it. Back when I was a little girl, the pavement ended right in front of this old farmhouse. In the old days (and to some degree, even now) hard road was politically-driven. Power and influence gets asphalt, and my cousins have always been a political family. My cousin is the current county prosecutor. His father, my Great-Aunt Ruby’s son, Bob, was a state house delegate. My Great-Uncle Carl wasn’t a politician per se, but he was a prominent local Democrat, a farmer, and an oil company man. Carl wanted this road paved, and he got it–right to his farm and no further. When they sent the road crew out, they told Carl to cut a measuring rod 9 feet long for the crew to use to make the road. Carl didn’t want a nine-foot road so he cut it 12 feet, and he got a 12-foot road because nobody double-checked him. Carl knew how to get things done. 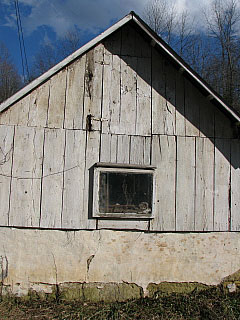 And my Great-Aunt Ruby knew how to keep her yard tidy, so the farm was divided by more than pavement. She designated one side of the road as the men’s side of the road, and the other side as the women’s. Nothing unsightly allowed on the girls’ side.

One of the interesting things on the boys’ side is this old building where Carl generated his own electricity for the farm for many years. The farm, like many farms in this area, also had gas wells, and the farm enjoyed free gas for heat and light for decades. The light at the pole outside the house was never turned off. Back in those days, they thought the free gas would last forever, but it’s gone now. 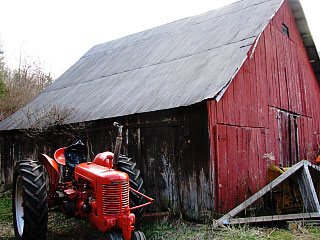 Besides working for the oil company, Carl was a real farmer. He had cattle, sheep, pigs, and chickens. They also always kept a pony, for their kids, and later for their grandchildren and other visiting relatives’ children. One of my most vivid memories from visiting here as a little girl was the day I lost their pony. For some reason I can’t imagine, I was allowed to take off with the pony down the road, which was dirt past the farmhouse, and the pony got away from me. I can still see the puddles in the dirt road as I ran screaming and crying after the pony, which I couldn’t catch. I came sobbing around the back of the farmhouse to find Ruby in the garden, where she could typically be found, and told her I’d lost her pony. She told me it would come back, and it did. I don’t remember her ever letting me take off with her pony on my own again, though.

As the current owner of the farm, my cousin’s interests are prominent on the boys’ side of the road now. Back in a holler behind the barns, he keeps his collection of old vehicles. He’s an old engine enthusiast and he likes to take three old cars and put them together into one that works. Which explains why you can find three Scouts, three VW bugs, three Mack trucks, and three S-10 pickups around here. He’s got enough projects lined up to last a lifetime…. Unable to resist an interesting vehicle to add to his collection, he picked up that old ambulance a couple of years ago. It actually runs, and on occasion he lets the kids drive it around the meadow for kicks. 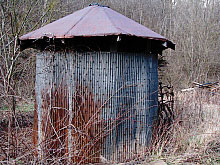 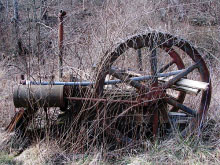 Like ghosts haunting the landscape, reminders of the past dot the grounds. Left, an old, rusted corn crib. Right, a flywheel, part of an oilfield pump system. 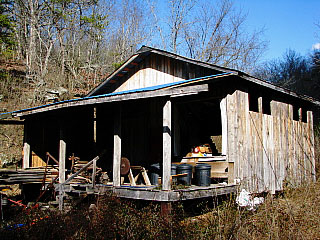 And then there’s my cousin’s biggest project of all, a reproduction of an old country general store. He’s been working on this one for a couple of years. The shell of the building is completed, and much of the interior work is done. Inside, there’s an old-fashioned store counter with an antique register. He needs to put up the shelving and clean up. (I’ll take pictures inside the store in another post someday–right now, he has so much stuff stacked on the porch, I can’t get in the door.) He says he plans to sell fireball candy when he opens his store. 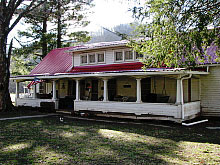 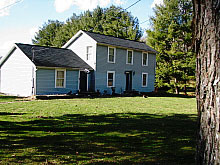 Here on the neat and tidy girls’ side of the road are the three houses that make up this family farm. There’s the 100-year-old farmhouse, where I am currently, and the two-story blue house where my cousin, his wife, and their teenage son live. 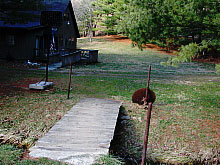 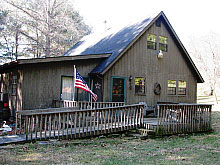 Don’t you just know Georgia would live across an enchanted little footbridge over a creek in a little fairy cottage surrounded by pine trees? 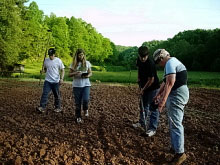 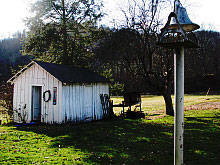 Also on the girls’ side of the road is the enormous garden (photo from last spring) and a quaint old wash house. Notice the standing farm bell in the foreground to call the men in from the field for supper. 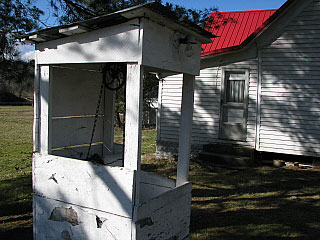 One of my favorite spots is this old well house. I think it’s adorable, though I can’t imagine carrying buckets of water into the house for cooking and cleaning and bathing. I doubt my predecessors in this old farmhouse thought it was as cute as I do. 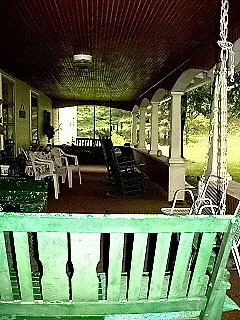 Every farmhouse tour ends here, on the perfect porch, where on warm summer days, there is no better place in the world to sip a glass of something cold, sway in the porch swing, listen to the soft breeze making music in the wind chimes, read a book, wait for neighbors to pull over, and talk for hours.

Here on the big front porch, not much has changed in a hundred years.