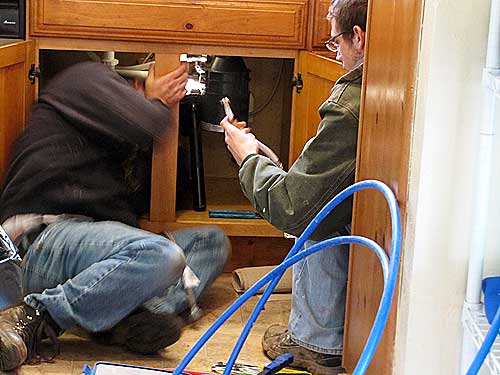 How many plumbing calamities can one person have? Apparently, I was testing! Eventually, I replaced most of the plumbing in the house and the studio, and many of you helped. I haven’t forgotten. Thank you. I’d only been at Sassafras Farm for a couple of months and it was a scary time, but in other news, it was a strangely mild winter, making most of the work on the new farm easy. 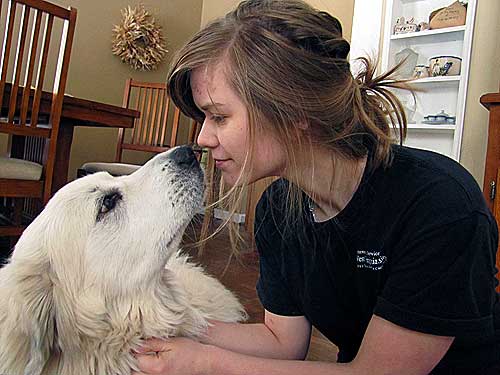 There was a crushing event on the farm. My beloved Coco was hit by a car, ran away into the woods, and I thought I’d lost her forever. It was one of the single worst farm events I’ve lived through. I learned the lay of the land on my farm as I walked and searched for her, to no avail. But then there was a miracle. After nearly a week, Coco came home. Eventually, she would spend more than a month at the animal hospital, but today, she is right as rain. Sometimes, I can still detect a slight limp, but she has far surpassed any prognosis for her recovery. (Last week, Coco got out of the barn yard and ran down the road. Morgan and I were practically in a fit. I had to remind her, Coco isn’t hurt, she’ll come back, and five minutes later she did. I think we have post-traumatic stress! Coco leaves our sight and still we think we’ll never see her again.) We also brought home a companion for Coco–our sweet, bouncy Chloe! Two Pyrs! 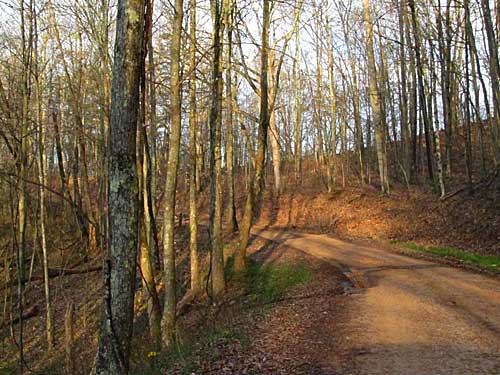 The road to Stringtown Rising.

March was an amazing month. After the hardships of January and February, my new life at Sassafras Farm seemed to be falling into place. I sold the memoir of my adventures at Stringtown Rising at auction to HarperCollins (September 2013 release) and YOU funded my Kickstarter project to remodel the studio. Today, it is a beautiful health department-approved kitchen where I hold workshops and other events on the farm. It is amazing. THANK YOU!!! Meanwhile, BP and Glory Bee were at Sarah’s farm visiting the bull…. 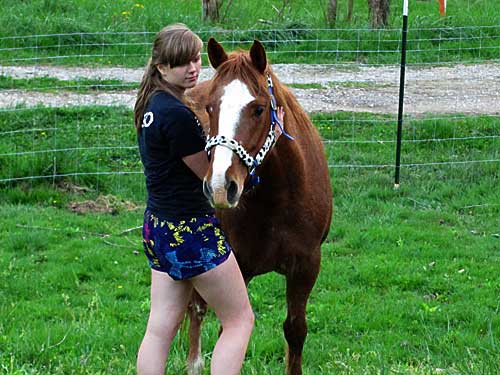 Our journey into horses begins as we bring Patriot home. Morgan was in heaven, but unfortunately, Patriot didn’t turn out to be a good fit at Sassafras Farm. We still miss him, but horses better suited to our abilities as new horse owners were around the bend. Meanwhile, the cows came home! I planted a new garden of ramps on my new farm, and work progressed briskly on the studio remodel. 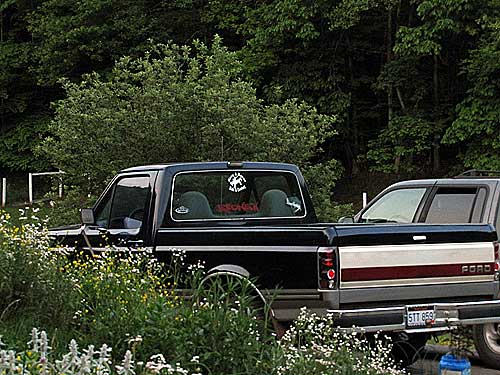 Ross got a new truck and gave me his old truck. Stick shift! I hadn’t driven a stick shift in many a moon. I immediately had all kinds of trouble trying to drive it and one day got stuck in a sharp turn in the middle of nowhere because I couldn’t shift into reverse. My cousin came to my rescue. When Ross needed work done on his new truck, I set myself a challenge by sending him back to Norfolk in my Explorer, leaving myself nothing to drive but that old truck. It was scary, but it worked–I can drive it now! (I think Morgan remembers this as The Worst Month of Her Life whereupon I took her everywhere in the truck and she was pretty sure I was going to kill us.) Meanwhile, back on the farm, Zip arrived, our second horse. 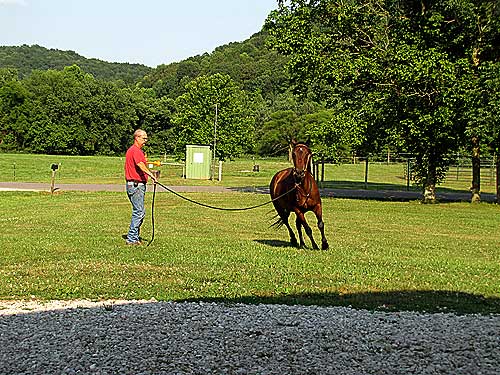 Zip meets her match in horse trainer Mike Trader! The summer was all about horses and horse training–and I learned to ride, too! Now I can’t imagine my life without horses in it. I feel so fortunate to be here on Sassafras Farm where I have a pasture and barn that allows me to have them. I also got a brand new beautiful milking parlor built into one of the stalls in the barn, preparing for a calf that I wasn’t really sure was coming. After planting all kinds of fruit trees on the farm (over two dozen trees in the ground), I also found berries and pawpaws on the farm. The studio was finished! And I got my health department permit. 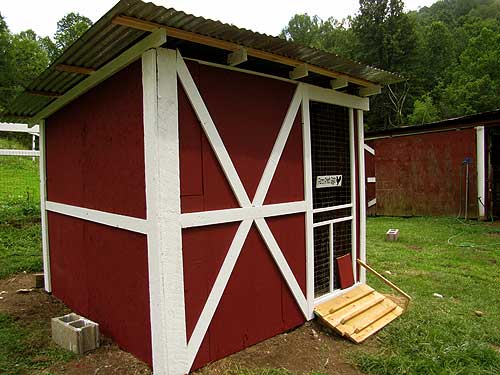 My favorite hired men, Adam and Robbie, built me the most adorable chicken house I’ve ever seen. The chickens, however, were not impressed, and still only half of them use it. But at least I have one! Meanwhile, the month started with the aftermath of the derecho and a very long power outage. I broke down and bought a button-start generator and am ready for winter. I made an awful discovery–I lost my precious MinnieBelle and my young ram to a mysterious predator attack. The extreme highs and lows of this astounding year have me reeling sometimes…. 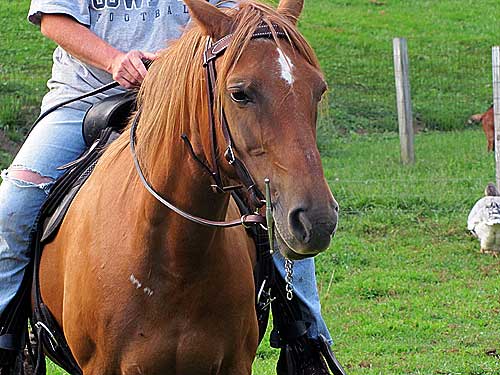 Our “horse family” is finally complete with the arrival of my sweet, sugary Shortcake. She makes me feel like a horse crazy teenager. I am still so in love with this horse, I’d sleep in the barn with her. Catching her remains a pesky challenge, though things have improved and will continue to improve as she learns to trust me and realizes she’s not going anywhere. I can ride her, and she makes me feel safe. She is an obedient little thing once she’s got a saddle on her back, and if she ever likes me one percent as much as I like her, we’ll do just fine. Adam punches Glory Bee and tells me she’s bred, and I start working with her to train her. I hit my goal of nearly 700 bales of hay. I’m ready for winter earlier than ever. 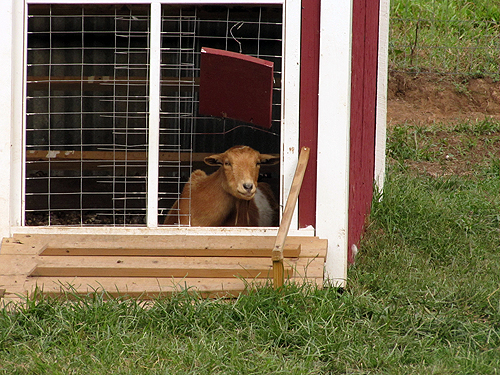 The month was wild with another retreat and yet another party on the farm under my belt, but the extremes of this year hit their lowest point ever with the loss of my beloved Clover. I can’t talk or write about her, still, without crying. I miss that crazy goat. ‘Nuff said about September. That month really sucked. 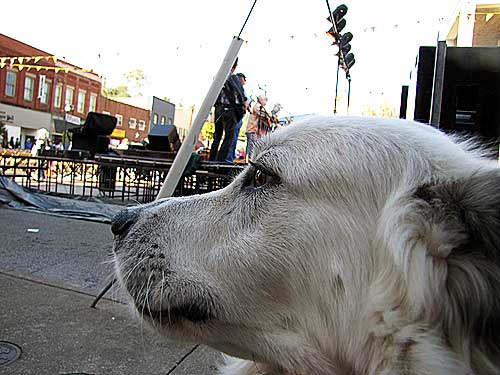 I’ve got a new dog, a third Pyr, and she goes everywhere with me! Gwennie still goes everywhere with me. And she’s sitting on my couch as I type this post. I have a house Pyr! I also have a new ewe, Ebby, and plans for more new sheep in the spring, a couple of Tunis ewe lambs and a ram lamb. My flock is coming back! I pick pears and reflect on how much my life has changed in the past year.

It’s been a few years since I picked pears in that spot. I went there with 52. He helped me find a place to get over the fence, and he carried the buckets, and I probably wouldn’t have gone at all if I hadn’t had somebody to go with me. Yesterday, I stood there in the beautiful October sun on that West Virginia ridge top, mud all over my legs, buckets filled with pears I’d carried myself, scrapes all over my arms, and thought, This is the difference between me now and me then.

Oh, yes, my life has changed. 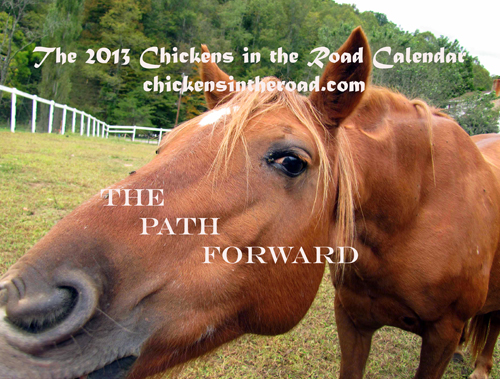 I finally get my calendar act together–Wanna buy a calendar? The kids descend for Thanksgiving and Ross shoots his first deer. I have a lot of fun in the kitchen learning more about cooking with venison. I spend an inordinate amount of time inspecting Glory Bee’s bee-hind, looking for clues to the calf’s arrival. I also start subjecting you, my long-suffering readers, to a slew of cow pornography such as the internet has never seen before. 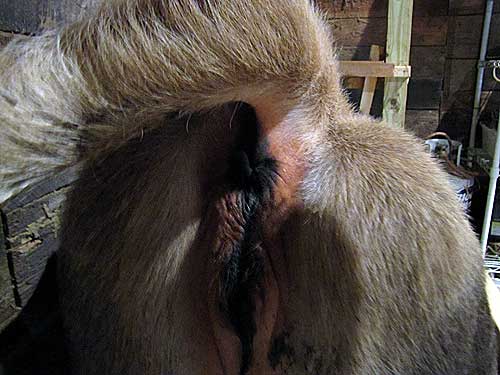 December.
BP has a big accident and I nearly lose her in the creek, but the year ends on a high note. 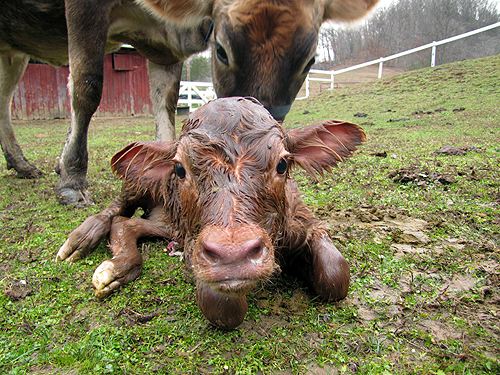 Calf. Calf! CALF! The bad baby has a baby, and Dumplin starts working right away on demolishing my plans to roast her. I’m milking again!

2012 was a year of great pain and great joy around here. It was a year of self-discovery for me, and of discovery of this farm and its potential. I learned a lot, I stretched my wings, and most of all, I got through it alive and still full of hope for the future. Every year is a new opportunity, a new challenge, and a new page to write fresh. I don’t know what 2013 has in store yet. Come with me?