January, 2007. We get three new cats. It’s cold in the 100-year-old farmhouse. My kids break off four-foot long icicles from the cliffs along the road, skate on the creek, and make giant snowballs. Snow is fun! I love living in the country in the winter.

February, 2007. It’s even colder. Did somebody say snow is fun? The pipes in the old farmhouse freeze three times and my gas heater dies. I write this haiku, dreaming of spring.

Spring stirs lazy eyes.
Pipes in a pissed-off farmhouse
spit, “Get your ass up!”

April, 2007. We get two more cats. It’s spring! It’s SPRING!!!!!!! I fill pots and old wash tubs with seeds. I hang trailing baskets of vines and flowers. The garden gets plowed and we put up the electric fence to keep out the deer. We buy a new farm, our own farm, and here at the old farm, we sit on the porch again now that perfect porch-sitting weather is here. I love living in the country in the spring.

May, 2007. We start working on the new farm. We put up fence posts and unload ten tons of rocks trying to build a bridge all by ourselves. We have soooo much energy! We are pioneers! We can probably build the house all by ourselves. A log house. We have a million trees! 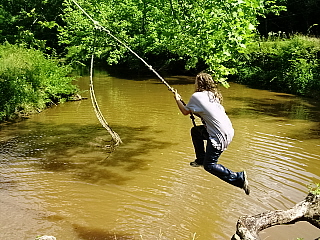 July, 2007. We only get one new cat. We’re not going to get any more. Really. It’s summerrrrrr!!! We play in the river, jumping from the old rope swing, catching tadpoles, skipping rocks. We’re going to find somebody else to do all the work on the new farm. We’re having too much fun. And the garden is bursting with vegetables! I have fresh homegrown flowers in antique glass vases in the old farmhouse. I have blackberry fever and I’m covered up with scratches from fruit-picking but I don’t care. I love living in the country in the summer.

August, 2007. It’s hot. We have the worst drought ever in the history of mankind, or something like that. The weeds survive even as the garden dries up. The deer leap over the fence to chew up what few vegetables perservere. We ration water in the old farmhouse for fear the well will go dry. Did I mention it’s hot?

September, 2007. I wonder what it’s like to have air conditioning. And water. 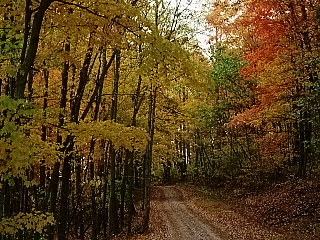 October, 2007. We get four more cats. It’s fall! And we’re building a house! At first it looks like a big box, but slowly, surely, it grows up from the ground, expands, fills out, and it’s a farmhouse. Our farmhouse. It’s going to have insulation and air conditioning!!! We are so excited, we can hardly stand it. And as if the world celebrates with us, the woods burst with beautiful color. I love living in the country in the fall.

November, 2007. How come everything costs so much? I might have to sell my body to pay for this house. I’m barely saved from a life of prostitution. The house takes shape. There are walls and windows and doors!

December, 2007. I wonder if the house will ever be finished. 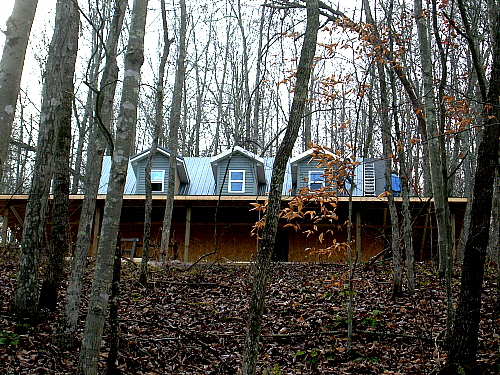 I wonder what the coming year will bring. Today, I live in an old farmhouse, but the promise of a new one rises on a hill a few miles away. Today, my children are growing up, but they are still my babies. Today, I am sad when I think of some things in the past, but I’m filled with joy for everything in the future. Today, I don’t know what the new year will bring, but it beckons with possibilities and dreams.

This is my now.