My Great-Aunt Ruby’s parlor was open for company when she pulled back the drapes on her front window every morning. Ruby, and her husband Carl Sergent, were well-known denizens of society in their time, and this small, humble room has seen family and friends, farm hands and state governors. The Sergent family was one of the established land-holding lines in this county going back 200 years, and it was no surprise that eventually one of them would marry into another equally longstanding family name here, the Dyes. Carl and Ruby weren’t the first to live in this old farmhouse, but they were the most prominent, and they were the ones responsible for “modernizing” the house (circa 1960) and expanding it to add several rooms and the massive front porch. 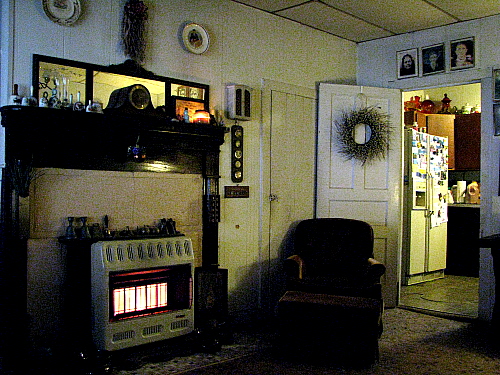 The fireplace was converted to gas back in the day when this farm held claim to several natural gas wells and the gas was plentiful–and free. No need to chop wood when you had free gas. (The fireplace stove now runs on propane.) 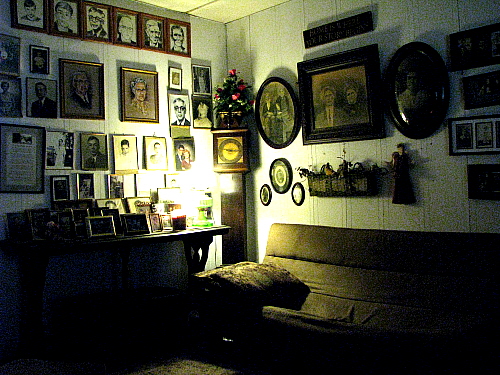 On the left, you can see the Sergent Wall, with twin paintings of Carl and Ruby holding central position. On the right is the Dye Wall. Most prominent on this wall is an antique photograph of John Morgan Dye and his wife Florinda. Ruby was a Dye, their daughter. My grandfather was also one of John Morgan and Florinda Dye’s children, and he was Ruby’s brother. My great-grandfather John Morgan Dye’s farm is directly across the river from my new farm a few miles away and I can see the bank where his house once stood from my new front porch, which is also where Ruby was born and raised. Once, in a fit of redecorating, I reframed a number of the photographs on the Dye Wall (except those in vintage frames) and reorganized the wall, adding some primitive craft touches. Since I’m not of Sergent descent (and am only related to them through Ruby), I left that wall alone. I did talk Georgia into cutting down on some of the photos on the table in front of the Sergent Wall because the cats kept knocking them over. There used to be, I’m not kidding, twice as many photos on that table. 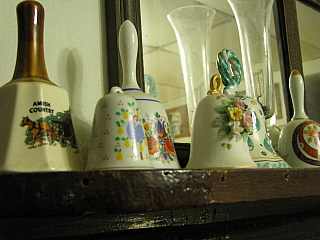 Ruby was a great collector of many things, including bells, some of which are here on the fireplace mantel. She also collected West Virginia glass, salt and pepper shakers, thimbles, and other items. I doubt anyone had to think hard about what to give Ruby as a gift–all they had to do was add to one of her many collections. 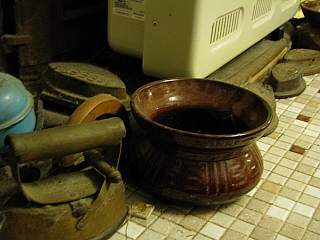 There is also a great collection of heavy antique irons that sit on the hearth. Moving them for dusting is serious exercise.

One of the things I’m grateful to this old farmhouse for is that it stands as a monument to family history that is all around me in the land, but my own great-grandparents’ house (the one that once stood across from my new farm) is long gone and the land fallen into other hands. My great-great-grandfather’s house still stands, but it also is in hands outside our family now. And while I have bought back a piece of our family history across the river a few miles away, there is something about being able to stand in this old farmhouse, to know my great-grandparents stood here in this home when they came over the hill to visit Ruby, as did my grandfather and my father. I visited here often myself as a child. I knew Carl and Ruby. This house is the purest unbroken chain of family history to me. It’s also been a great education to my children, who know their ancestors now and can pick out their photos and identify them as they never could before. My daughter presented a project on John Morgan Dye that won honorable mention at the West Virginia State Social Studies Fair last year. 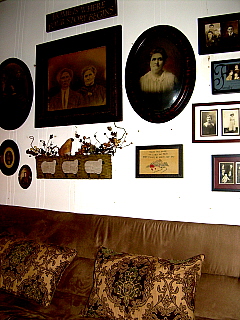 Living here was not something I ever expected, or planned, and sometimes it can be quite difficult, but I think it was meant to be. The generation of my family that grew up here, moved away, raised their families elsewhere, is disappearing. Fewer and fewer of them return to these hills even to visit. Other than my cousin, through his grandmother Ruby, John Morgan Dye’s children, grandchildren, and great-grandchildren are gone from this county, and even he is not as connected to that side of his family history. He is a Sergent. I came back and I bought the farm across the river from John Morgan Dye’s farm, which was as close as I could get to buying back the family farm. I am a Dye. I know the history and the stories my father told me when he brought me here as a little girl. I can point to my great-great-grandfather Abraham Dye’s house–and I am the only one left who can. I know the way.

Except now, my children? They know the way, too. They learned it here, in this house, from the people on this wall–who were, I think, always waiting for me to get here.