Some of you asked about the package that Morgan was so eager to get at on Christmas morning that she was biting into it before I could get her a pair of scissors. A few months ago, she came to me and said, “I’ve decided what I want for Christmas and it’s going to make you really happy.” I thought, wow, she wants a kitchen food scale! Cuz that’s what I wanted. But no…. “I want an American Girl doll,” she said.

If you have never been indoctrinated into the world of American Girl dolls, let me tell you that they are really lovely dolls. Really lovely expensive dolls. And I love dolls. I had a big doll collection when I was a kid, which I still have and if I ever get it all unpacked, I’ll post some pictures of them. (I know you men who read here can hardly wait for that!) I started putting dolls in Morgan’s crib before she was even born. At that time, American Girl dolls had become the latest “it doll” every girl wanted for Christmas. They are geniuses over at American Girl–they have baby American Girl dolls with bassinets and diaper bags and strollers and big girl American Girl dolls–dolls representing different eras in American history or you could even “make” your own doll in your child’s likeness by selecting the hair, eye, and skin color. They all, of course, came with oodles of outfits and books telling their stories. And!!! You could buy matching doll/child outfits so your child could parade about with her doll, dressed alike. Could anything be cuter?

Eventually she had two Bitty Babies. (Pictured here in the Bitty Baby bassinet.) 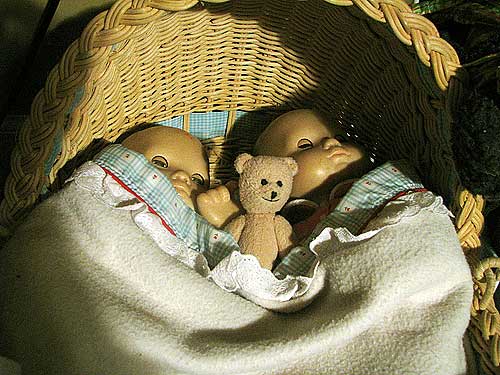 Each Bitty Baby comes with a Bitty Bear (there’s one of her Bitty Bears between the two Bitty Babies above.) 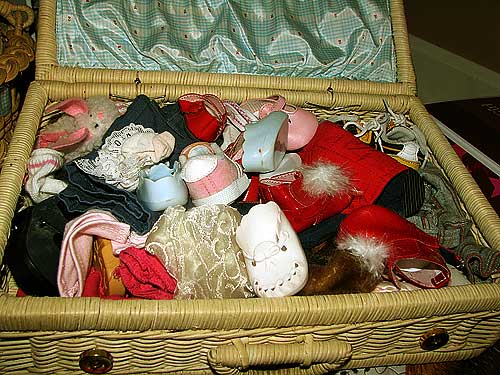 And then she lost interest in the dolls completely, somewhere around age nine, and when they were then packed up and she didn’t see them for a few years after we moved to West Virginia, she didn’t mourn them a bit. Recently, she unpacked the last of her boxes and rediscovered her dolls. And then, suddenly, she was asking for another doll.

She is almost thirteen.

I recall having a brief resurgence of interest in dolls around her age, but still… She had never been as into dolls as I was to begin with. And, well, they are ridiculously expensive dolls. I was enjoying posher days when I was building her American Girl doll empire.

Besides, like, could she possibly be serious? She wants a doll for Christmas? She wasn’t asking for just any doll, either–she was asking for Samantha, not just another American Girl doll like she has but one of the historical American Girl dolls, the 1904 “Victorian” doll. The one I always wanted to get her but she wouldn’t have it because she wanted the modern girls. I said, “I think you should sleep on that.” (You know, while I ask your grandmother if she wants to buy that for you cuz I can’t. And while you regain your sanity and remember that you really want an iPod. Which, by the way, I can’t buy for you, either.)

I made her sleep on it that night and for about three more weeks.

Upstairs in her room, I noticed she’d put her dolls out to play. When Morgan was about seven, she had this same outfit–the shirt, the embroidered denim pants, the crocheted sweater. There was a little purse, too. She and her doll looked really cute when they dressed alike. 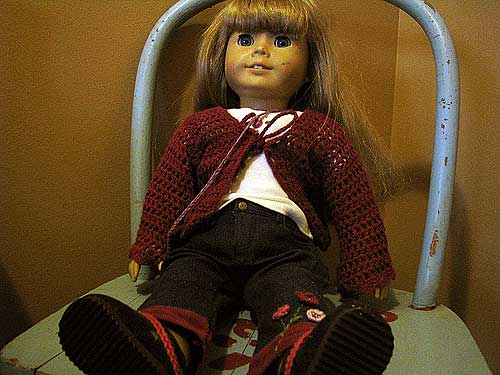 She had both of the dolls sitting at this little table that was mine when I was a child. 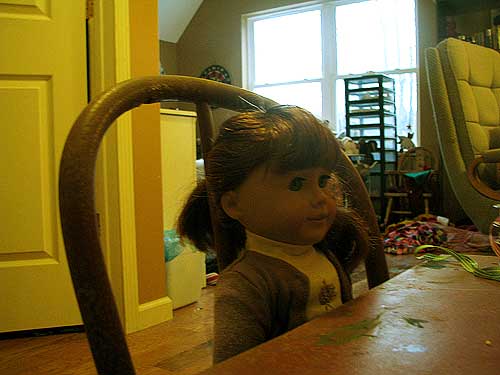 I don’t know what the Pumpkin Cowboy is doing there, but I don’t think he’s fittin’ company for the girls. 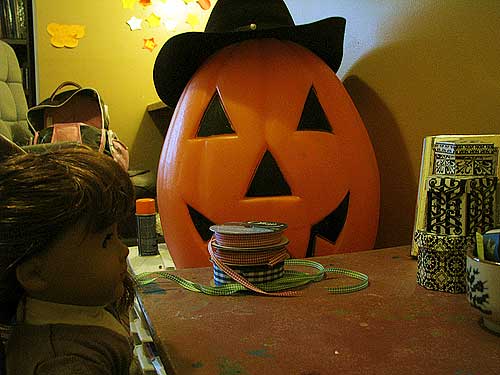 I also think I know where all my ribbon went. 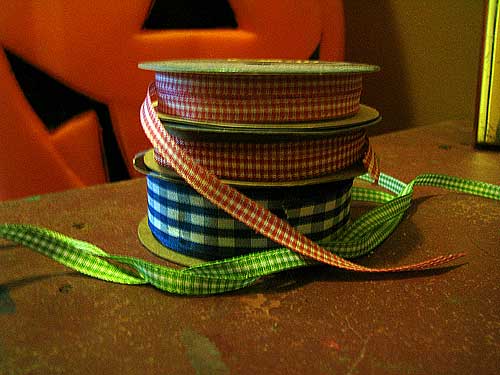 And she really needs to clean her room. 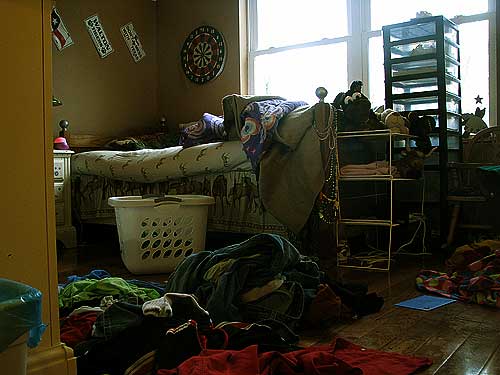 In the end, she convinced me she was serious and her grandmommy bought her this doll for Christmas. 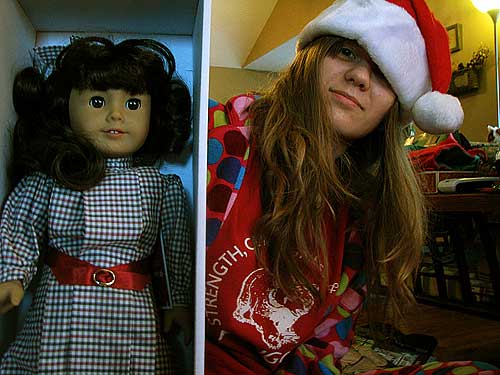 And thank goodness, because Samantha knocked the Pumpkin Cowboy out of his seat at the old tea party table and all is right in doll land again. 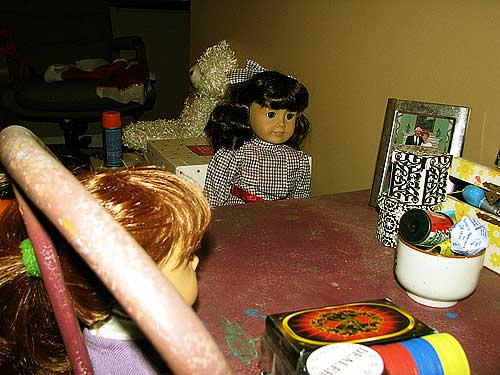 After the doll was ordered, I was unpacking more boxes of my own and I found a box of Bitty Baby things that I had hidden away years ago. Bitty Baby’s outfits, as I mentioned, always came with all sorts of accessories, little toys, little books, all sorts of cute things that she would just tear up when she was two and three and four years old. At first I let her have them, but eventually I started tucking them away. I would only give her Bitty Baby’s new outfit and I’d hide the rest. I didn’t want her to tear it up.

I’m not sure what I was saving it all for. I found the box inside a big box I unpacked and opened it up, looked at everything, and felt really bad for little three-year-old Morgan who would have enjoyed tearing all that up and so what if she did? I regretted not giving her the things when she was little and smacked myself for having been so uptight.

I had just seen a very small bit of a piece on TV about unopened gifts from long ago and it hit me–I’ll wrap this up and give it to Morgan for Christmas! The whole box! It’s like an old unopened gift–a whole bunch of them! She’s interested again, at least for the moment, in dolls, so surely now was the time, and if not now, when? I already wished I’d given it to her long ago. So I wrapped the box up and stuck it under the tree. And then forgot what it was. (I wish I could say I was kidding about that.) Morgan picked it up after she’d bitten into her Samantha doll box and asked what it was. I said, “I don’t know. I don’t remember buying it for you.” Then I suddenly remembered and got all excited and said, “Open it, open it!!”

As she opened the box, I explained to her what it was and where it had all come from. 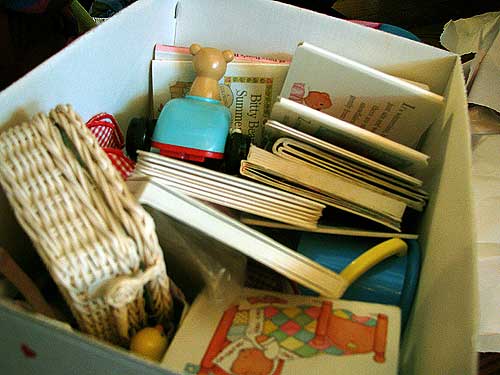 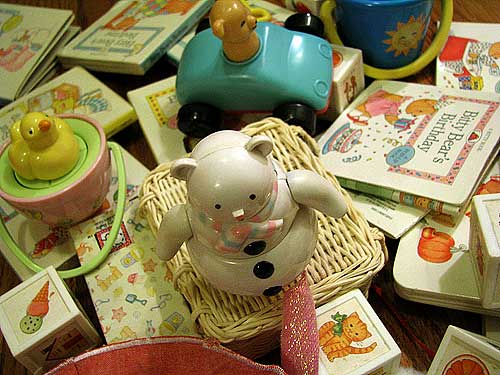 She was thrilled, not only to have all that Bitty Baby stuff, but to have it all in vintage condition, perfect, not chewed up and spit on and torn like some of the Bitty Baby things I had given her before I started tucking them away. Looking back, I’m not sure I would do the same thing again as far as having hidden those things away from her when she was little, but…..

I liked how it ended.