One of the sheep was out one evening this week. Well, she’d been out for awhile. Sort of. It was Miss Cotswold. Several days earlier, she’d somehow managed to get from the third field into the middle field. We have the bucks in the first field. We’d separated the sheep and bucks with one empty field between them after Mr. Cotswold got a little over-excited with the bucks and threatened to bust the fence down between them.

Soon, the bucks will be coming up near the house to the new duck ‘n’ buck yard, then the sheep will have the run of all three pastures. In the meantime, we were waiting for the weekend to hustle Miss Cotswold back where she belonged since there was no rush. She doesn’t cause trouble with the bucks. That’s just Mr. Cotswold. So for a few days we had the sheep and the other sheep. But then she got out of there completely and was wandering around all over creation, or mostly just around the sheep field because sheep like to be with other sheep and she wasn’t really going anywhere.

But. We had to get her back in there. Can’t have a sheep wandering loose. 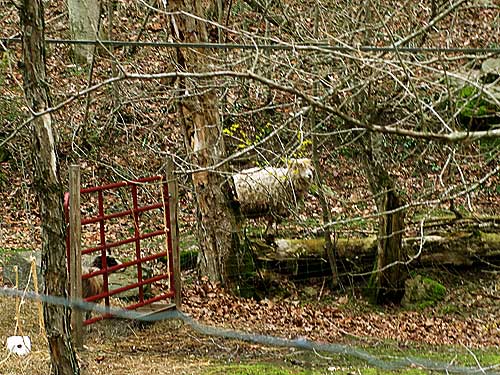 Awesome! A farmer job! I got my chore boots on and said, “Hang on, I’ll get my lasso.” Or my camera, but whatever. We’re gonna get that other sheep back where she belongs!

This whole event kept making me think of the book my dad wrote called The Other Sheep. It was published in 1963 by Vantage Press/New York. 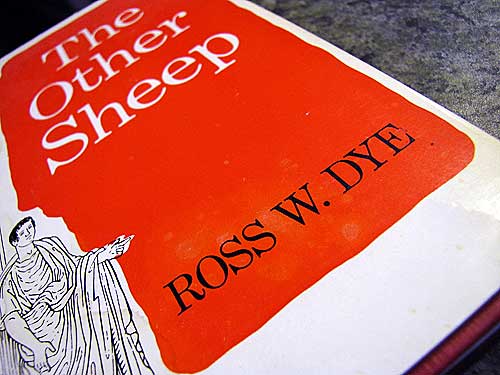 The front cover flap reads: “It is of Cornelius, the centurion, that this novel tells, Cornelius and his beautiful wife, Damaris. Set in the splender, pomp, and glory of the Roman world, The Other Sheep brings to life the struggle to free Christianity from its provincial beginnings and make it a universal religion. Palestine, a seething pot agitated by the chicanery of Roman emperors and governors and the mounting pressure of religious zealotry, is, in this story, the setting for the love of Cornelius and Damaris. In these pages you will read of their passion, their joys and sorrows, and their place in the moving events of an era of upheaval.”

And so on. The book is somewhat heavy reading and I have to admit that I have never read the entire thing. Which is dreadful. I should read it! But….

“Living in an age fraught with religious prejudice and political intrigue, Cornelius, the first Gentile converted to Christ, is the epitome of the pattern of change, enlightenment, faith, struggle, defeat and victory that accompanied the onrushing tide of Christianity sweeping across the Judeo-Roman world during the first century of the Christian era. Never before or since have such forces been set in motion, and in The Other Sheep you will live with those who made the history of the time, share their visions of hope, sympathize with their weaknesses, and rise with them to the challenge of a new day.”

Still, one of the reasons I never doubted I could be a published writer was probably because it was quite ordinary in my family. My father had another book published called Words of Comfort, which is a book about the grieving process. It was written after my older brother (who I never knew) died in 1961 at the age of 13. He also wrote another non-fiction book about teaching and had a sermon series published. My father was a Church of Christ minister, and whenever he dealt with someone who had experienced a loss, he would give them a copy of his Words of Comfort book. He also wrote untold numbers of magazine articles and religious tracts. (You know those little pamphlets that they have in racks in churches. My dad wrote OODLES of those.) My mother wrote articles for Today’s Christian Woman and they both wrote regularly for Power for Today.

My dad gave me a copy of The Other Sheep in 1975 inscribed “To my sweet Suzanne who is a joy every day.” I’m a joy! See? 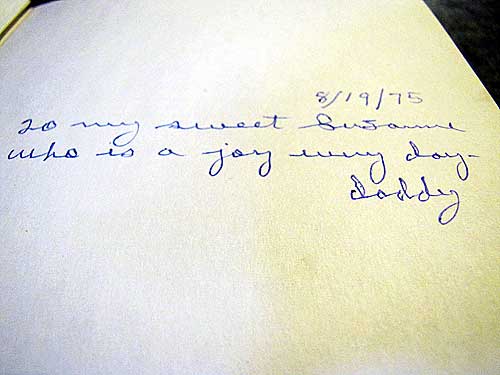 I’m a dearly added scribble on the printed dedication page as I wasn’t even born yet in 1963. 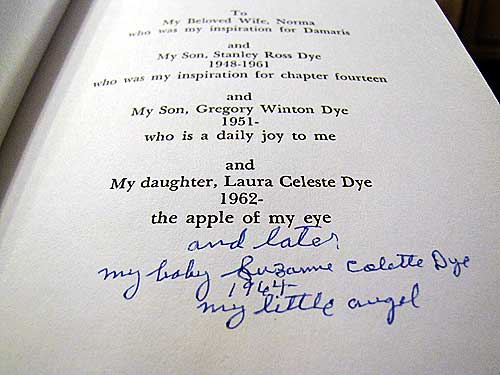 Every day is a good day to point out that my sister is older than me. Which means she’s quite old!

Back to the seething pot of the sheep pasture, agitated by the chicanery of Miss Cotswold.

I was petting the bucks, and wandering around a bit–somewhat like this post–and before I knew it, 52 had opened the gate and the she-devil let herself back in. Because sheep can be so difficult like that. I’m sure my help was indispensable. Though I didn’t do anything. 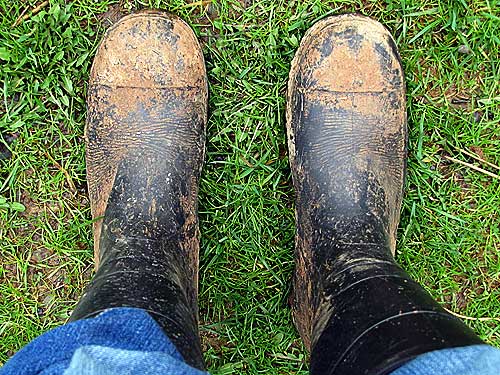 I had my chore boots on and that’s all that counts.