This past week has been filled with unbelievable highs and lows for me. Clover’s sudden loss was so devastating, but at the same time, the week was dominated by the energy and cheerful spirits of our camp staff, leaders, and attendees.

Check-in to the retreat began at noon on Thursday. We had a variety of “freestyle” activities going on all day Thursday including biscuit-making and pie-making as well as apple butter-making. Attendees shared crafts, and a special thank-you to the fabulous Pat Springer who taught knitting on the fly to any who wanted to learn. Retreat workshops took place all day Friday and Saturday, including cheesemaking, preserving, soapmaking, breadbaking, candlemaking, natural skin care, spinning, felting and fulling, quilting, container gardening, mushroom log inoculating, apron making, dulcimer playing, painting, goat milking/husbandry, and power tools.

I taught breadbaking, soft cheesemaking, and candlemaking. For me, it is always a thrill to see the light of excitement in someone’s eyes when they see their cheese form a curd, or when they put their fist in the dough and say, “NOW I GET IT!” 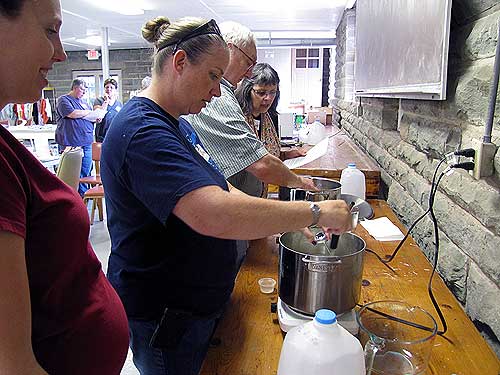 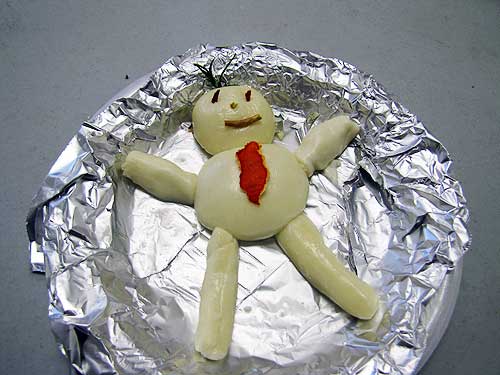 (I had some of THE funniest attendees in my classes.) 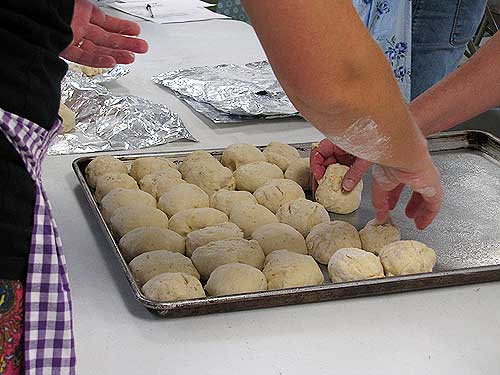 And oh my, those kids (I mean adults?) in my candlemaking class were a blast. They WERE like kids! I had them making cupcake and cake candles, but they really went to town when they started making pie candles. I’ve never seen such artistes! I was amazed. Behold some of their creations! 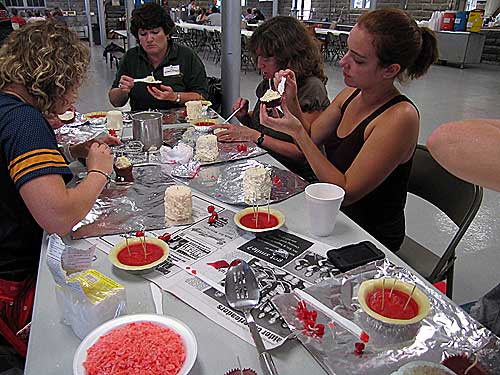 Cupcake candle with cherry and stem made from wick remnant: 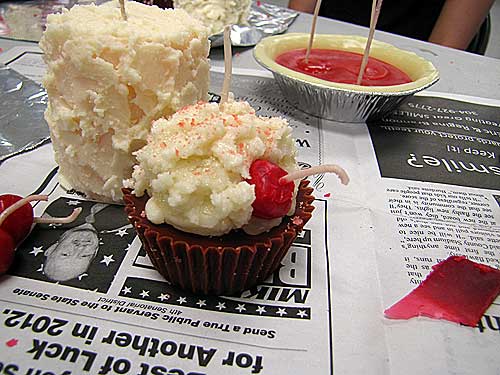 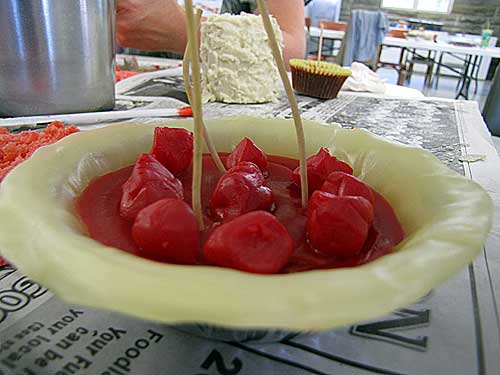 I made it around to as many classes as possible with my camera, but could not hit them all as I was teaching most of the time. 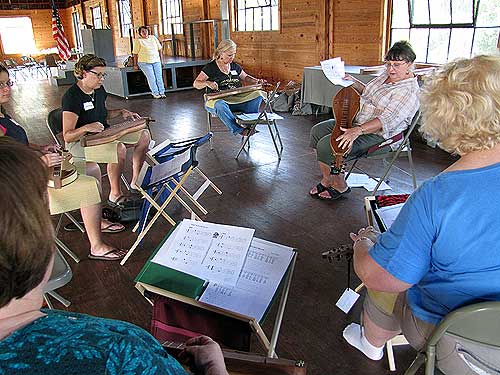 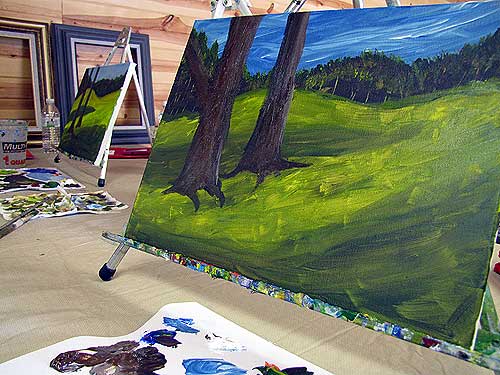 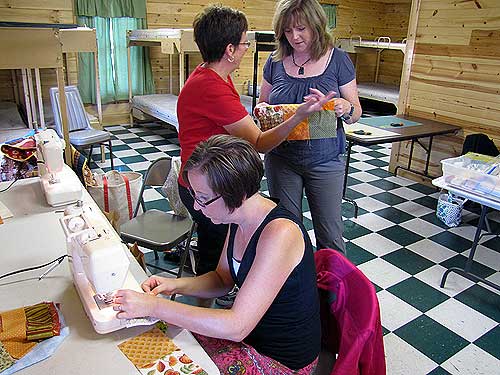 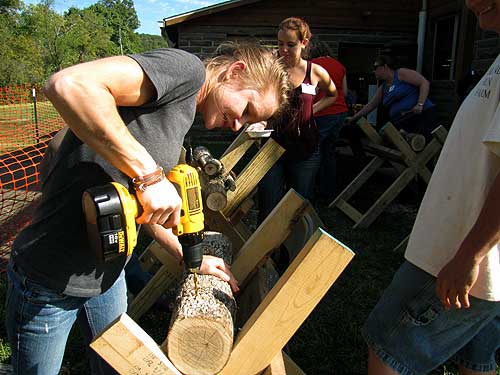 Goat husbandry–thank you to workshop leader Shelley for this photo: 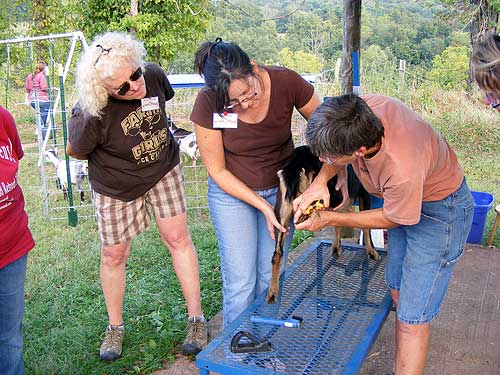 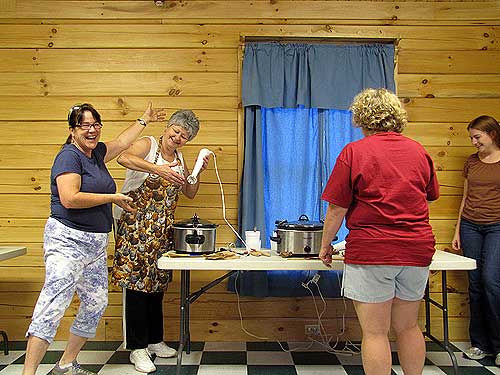 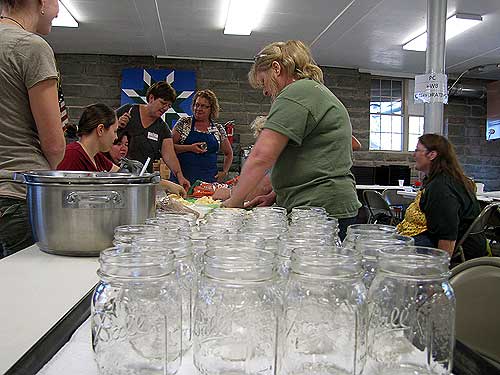 There were (of course) numerous mini-crises, most of which were managed without attendees ever knowing they occurred. I was at Wal-Mart between classes on Saturday buying pliers. Problem solved! Our entertainer on Friday night was a no-show. Problem solved! (In this case, I must mention the angel Sherry Gainer, who stepped in with what I am sure every person who was there will agree was a most delightful impromptu psaltery and dulcimer concert to save the day. I also want to thank our most wonderful Granny Sue, who told us stories on Saturday night and DID show up as scheduled!) We had to replace a teacher at the last minute due to a family emergency. Problem solved! (Thank you to my cousin Mark for stepping in.) And those are just a few samples! Anyone who has handled events is probably aware of the many behind-the-scenes crises that can occur. It’s exciting–and scary!–and there are many learning opportunities in managing events with meals, facilities and accommodations, workshops, equipment, supplies, entertainment, and more. My list of lessons learned grows and grows.

It would be impossible for me to thank every single person by name who made the retreat such a wonderful, positive experience, but I want every leader to know how appreciated they are: CindyP, Dede, LauraP, Blyss, Shelley, Heather, Kelly Walker, Kelly Bailey, Leslie and Diane, Mark, Pat, and Sherry. I also want to thank our cook, Debbie, and kitchen helpers Faye and Karen along with camp “lifeguard” Pete. I want to thank Heather (MrsFuzz on the forum) twice because she was at my house the week leading up to the retreat and I could not have done without her. She was a tireless hero every day and I literally cried when she left. And I can’t thank CindyP enough times because despite the fact that I do all the talking, behind the scenes, she is making it happen.

The Party on the Farm, like last year, took place on the heels of the retreat, and it was fantastic to welcome familiar faces from the retreat to Sassafras Farm along with many others who were not retreat attendees but joined us for the party. There was a CROWD. This was the biggest party yet, with spinning, felting, quilting, coffee bean roasting, sugar scrub cube making demonstrations plus hay rides and pony rides. (WOW, Shortcake was a HIT! There was a line to ride her all the time and she was a DOLL. Thank you to Tinia from Heart of Phoenix Equine Rescue for handling the rides.) Thank you to CindyP, LauraP, Kelly Walker, Heather, and Dede for helping me get ready for the party, and a big thank you to my friend Jerry for the photos in the party gallery below.