Yesterday was one of those days when I get annoyed with myself because, while I take my camera with me almost all the time when I leave home, there is always something fabulous just when I don’t have it–such as yesterday morning when I was driving 15 to football practice and a pair of wild turkeys crossed the road in front of us with their six babies. I stopped the car and they stood around posing for a moment before they took off. You know, like they were laughing at me for not having my camera.

In short order, a deer ran alongside the road and a bunny scampered across it. Butterflies were swooping around the car like I was driving through a Disney movie.

When I went back to get 15, I brought my camera. Merry woodland creatures, here I come!

We came around a bend in the country road on our way home and this was on the side of the road: 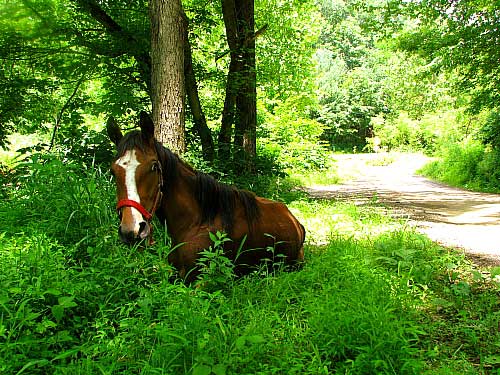 It wasn’t moving. I got out of the car, walked toward it, starting to worry. It kept just sitting there. I walked around it some, not too close, to see if it looked like it’d been hit by a car. I couldn’t tell. I was afraid to touch it. I’m scared of horses. And cows. (Which is why I bought a farm and am planning to get a horse and a cow, but that’s beside the point. I don’t always make sense.) Then the horse stood, shakily, and immediately collapsed again.

15 stuck his head out the car window and said, “I’m not picking up a horse.” He’s always prepared for me to ask him to do something ridiculous, like move a cow for Georgia.

I said, “I know we can’t pick it up. But we have to tell somebody!”

Back in the car, I stopped just up the road at a little house on a hill to check with them. They said it wasn’t theirs and they weren’t interested in talking about it.

People aren’t always friendly in the country when strangers come to the door.

I turned around, went back down the road in the other direction. Just beyond a low water crossing near the horse were two dilapidated-looking single-wide trailers with large dogs prowling around and “Keep Out” signs. We stopped and stared at the trailers.

And decided we were scared to get out of the car.

So we turned around again and went down the road a mile till I came to a house where I knew someone. We drove up to the house and the man came out. I told him about the horse and he said, “It wasn’t hit by a car. It’s sick and dying.”

He said to leave it alone, he knew the people who had it, and it was their property. I said, “But!!! It’s a horse! It’s sick! It’s on the side of the road! Isn’t somebody supposed to do something? What if it’s suffering? We can’t just leave it there!”

Life in the country is not always a Disney movie.