It was a cold wintry day when I brought my children to live in rural West Virginia. The farmhouse was one hundred years old, there was already snow on the ground, and the heat was sparse—as was the insulation. The floors weren’t even, either. My then-twelve-year-old son walked in the door and said, “You’ve brought us to this slanted little house to die.” Products of suburbia, my three children wondered why there was no cable TV or Target, not to mention central heat. My daughter, hungry from the trip, tried to call Domino’s. My cousins explained gently (and without laughing) that they don’t deliver pizza out here. I think it took her a good thirty minutes to believe they weren’t making that up.

I was at a turning point in my life, a crossroads where for the first time I could choose where I would live, not simply be carried along by circumstance. I was born in Texas, grew up in Maryland, Alabama, and California, and had since lived everywhere from Idaho to the Carolinas. When people used to ask me where I was from, I would go blank, like a foster child passed around to too many families to know which one was home. Where did I come from? I longed, deeply, to find a place to call mine. And as a writer, my office is my laptop. I could choose anywhere. So why did I choose West Virginia, a state that has notoriously lost population in the past century? 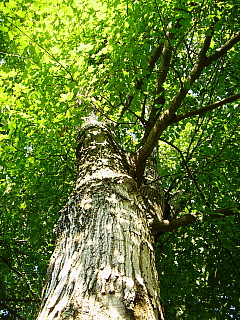 When I was a little girl and we lived in a suburb of D.C., my father took us every summer to an old cabin in West Virginia that stood on the last family-owned piece of a farm that once belonged to my great-grandfather, a farm once spanning hundreds of acres on the banks of the Pocatalico River. My father was born and raised on that farm in what was then known as Stringtown, a gas and oil boomtown in the early 20th century. Back in his day, what are now wild woods were cleared farm fields. There was a church, a school, a store, and even a hotel. The gasoline plant employed 50 men. There were wooden sidewalks down the dirt road and a public walking bridge across the river. The one-room schoolhouse where my grandmother taught still stands, but the Stringtown where I played during those long-ago summers was much different otherwise. It was like some kind of lushly-forested alternate universe filled with the ghosts and tales of my ancestors—the now-overgrown hills and meadows they once farmed, the caves where they hid their horses from Confederate soldiers, the graves in hidden cemeteries where they were buried. I loved those summers in West Virginia. I loved the trees and the quiet. I loved swinging on grapevines over the river and learning to skip rocks. And most of all, I loved that sense of history and place. My father clearly felt enough sentiment for it to share it with me by bringing me to visit here, yet despite its charms he–like so many of his generation in West Virginia, drawn like moths to the flame of cosmopolitan life beyond these simple hills—grew up and moved away, never to return but for those brief times. He used to say about West Virginia, “I got out of there as soon as I could.” 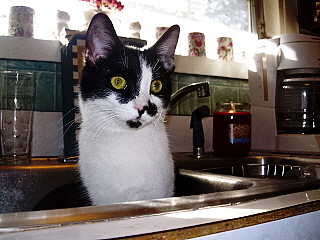 But when I stood at that crossroads nearly two years ago now and decided to move to the boonies of West Virginia, to a tiny town just over the hill from my great-grandfather’s old farm, I took a deep breath of the clean air, looked up at the sky littered with stars you could actually see, felt the far-reaching pull of my family’s roots, and said, “I got here as soon as I could.”

We live in the countryside outside the cutest little town that takes, oh, a minute and a half to drive through. Most people might think there’s not much here, but there’s all we need. If we actually want something from the city, we can drive the winding road to the interstate and get it, but that doesn’t happen too often. We have a cute little library comprised of one room, a cute little grocery store with five aisles, a couple of small churches and a bank, all flanked by country roads so narrow you have to pull off to pass. The school is so small, when my eighth grader graduated and I asked him who his friends were, he looked at me as if that was a stupid question and said, “There are only thirty-six students in the whole grade. I have to be friends with everyone.” 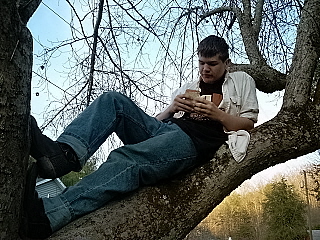 And he’s right—everyone is friends with everyone. The whole town is like one big “Cheers” bar. Everyone knows your name. At first, I found this disconcerting. Why are these strangers in the grocery store talking to me like they know me? And how do they know my name? When my oldest son totalled my car two days after he got his driver’s license, all the kids at school knew about it by the time he got there the next morning. When I arrived at the accident scene, a paramedic I’d never laid eyes on before was calling to me by first name. My cousin’s wife (a nurse at the nearby hospital) ran down to the emergency room in case we needed to come in. My cousin heard about it at his office and drove down to the scene. It’s like everyone knows everything by some kind of osmosis here. Everywhere I went for the next month, people asked me about the accident. This is a world away from the anonymous suburbs. Here, people are connected—to the land, to the history, to each other. People know—and care—about their neighbors (and they seem to know everything approximately five minutes after it happens). I watch my cousin drive his tractor down the country road every spring to plow his neighbor’s garden. I see my cousin’s mother take food up the hollow to a friend who had a farm accident. When a kitten climbed in and got stuck in the dash of my car, neighbors came over to try to get it out. No matter how big or small the problem is, people don’t just care, they help. People keep walking when a woman is being attacked in broad daylight on a public street in some parts of the United States, but people will drop everything to help a kitten here. 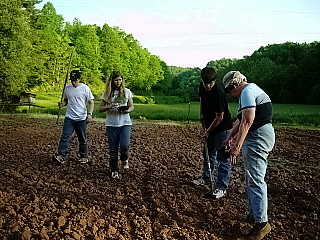 My kids eat sandwiches sitting in apple trees. They jump fully clothed in the river if they want to. They skate on frozen creeks and they know how to pick a hoe out of the shed. They know what a low-water bridge is, and how to set a turtle trap. We don’t worry about burglars at night but raccoons. They eat corn on the cob and know they planted the seed. People around here don’t have much if you compare them to suburbanites. Even if they can afford it, they don’t buy granite countertops or designer clothes, and there’s not much competition at the high school for the swankest car. As my son likes to say (in his exaggerated teenage way), “They’re all driving cars their grandfathers bought in 1950.” But for all they don’t have, what they do have is each other, along with that deeply-held pride in community and family and plain living that has been largely lost in the contemporary world. 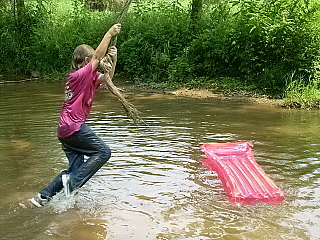 And that’s exactly why I wanted to bring my once-pampered suburban children here, to grow up knowing what matters, what is real. West Virginia is still an alternate universe from the rest of the country. Here, you don’t call for pizza. You call your neighbor. 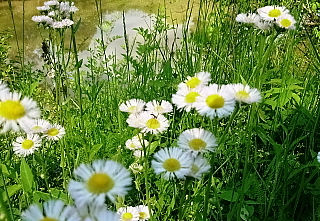 Other people may have chosen to leave, but I chose to come, and I choose to stay. When people ask me where I’m from now, I have an answer. I’m from West Virginia. And my children, who once wondered if I brought them to this slanted little house to die, have bloomed like flowers taken from a sterile hothouse and put out in the natural sun.

We didn’t come to this slanted little house to die. We came here to live.