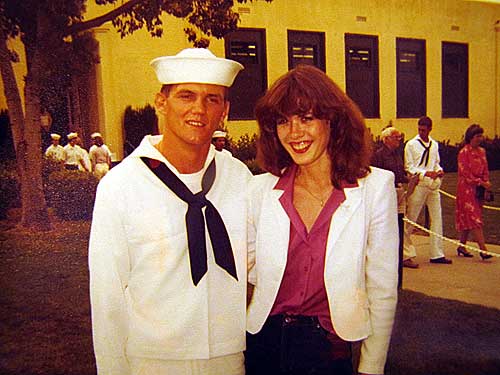 I sent this photograph in one of my letters to Ross this past weekend. I thought he would get a kick out of it. That is me, age 17, with Ross’s dad at his Navy boot camp graduation.

There are so many things wrong with that picture, I don’t know where to start, but I will go with the most egregious. WHAT IS WRONG WITH ME? I don’t look like that! (Look at the sidebar at the photo of me taken by Morgan several months ago. Is that the same person? I rest my case.) Why is my mouth so BIG in that picture? Was I scared? Did I know this photo was going to be on the internet someday? Or was I about to swallow a whale?

And those clothes! You know those are Jordache jeans and that I got that blouse and jacket at either the Clothesline at the strip mall or at Nordstrom’s (just two of my favorite places to shop when I was a teenager). I was such a clothes horse. And it was such a waste of time being a clothes horse in the 1980s. (See the shoulder pads?)

And I weighed 112 pounds. My mother was a fabulous cook right up until she bought a Venus de Milo figure salon in Buena Park, California, in the 1980s. After that, she became a health nut and I never saw butter, cream, cheese, or salt again. (Don’t I look like I’m starving?) I worked at her salon, too. When I showed up. Lesson to you: Never hire your teenage child if you own a business. They will just call in sick and go to the beach because they know you won’t fire them.

And my hair! And the makeup! Let’s not even discuss it.

I told Ross that I thought his dad looked like a total dork in that outfit but that I was sure he would look ADORABLE in his.

I also told him that if he showed that photo to anyone, he was to tell them that was his dad’s old girlfriend, Thelma.

And by the way, I lied about everything at the top about that being me and I was 17 and all that.

That’s Thelma. She was a 30-year-old hooker he picked up on liberty weekend. And by the way, what is wrong with Thelma anyway? HER MOUTH IS SO HUGE!!! Is she about to swallow a whale?