On Friday, I had lunch in Spencer with a friend, did some shopping (at Wal-Mart), and attended to some business affairs (got our farm in the system at the county Farm Service Agency office). By the time I was done and got back to Walton, there was just no sense driving the two and a half miles down our rocky road and through three creeks–and back–to be at home for a short time, so I spent an hour hanging with Georgia. (Are you new here? Have you not read about Georgia?) The kids get off the bus right next door, at the old farmhouse. (And if you don’t know about the old farmhouse, you really need to go here and read the Old Farmhouse Tour archives.) Plus, I haven’t spent enough time with Georgia lately and you never know what she’s up to. You have to keep on top of her. She might be out climbing a ladder into a tree or something if you don’t watch her. (I don’t make this stuff up!!)

She’d come across some things she’d set aside for me to look at and she got them for me. One of those things was this newspaper. 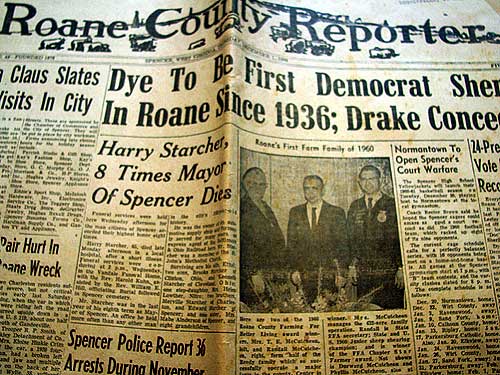 It was the December 1, 1960 edition of our county newspaper. She’d wanted me to see it because it had an article about the hard-won election to the sheriff’s office of my great-uncle, C.W. “Doc” Dye. 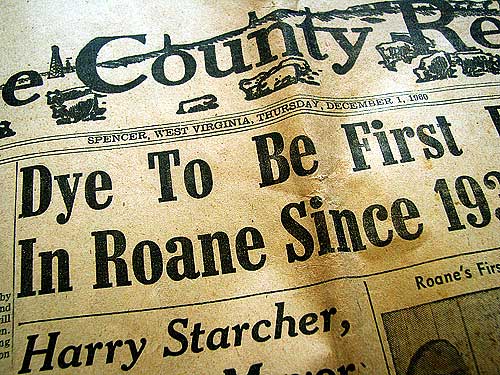 Back then, the paper cost five cents. 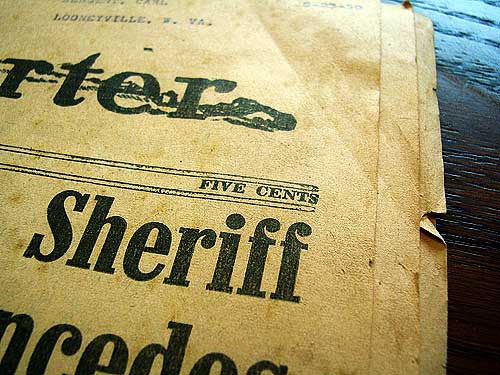 Actually, the article about my great-uncle was kinda boring. But! Wow! A newspaper from 1960. I was enthralled. You know, in that I’m-trying-to-kill-an-hour kinda way. Look at the ads! I loved the ads. 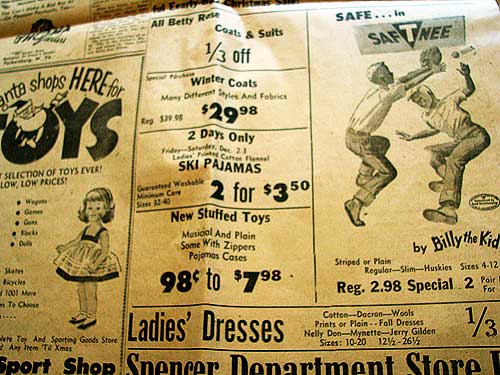 The paper really felt very 1950-ish to me. But, it was only just barely into the 60s, and after all, this was a small town paper in a very rural county. It was still 1950 here. 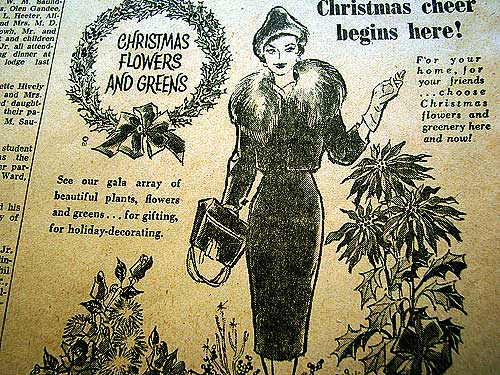 The movie showing at the Robey that week was Elmer Gantry. 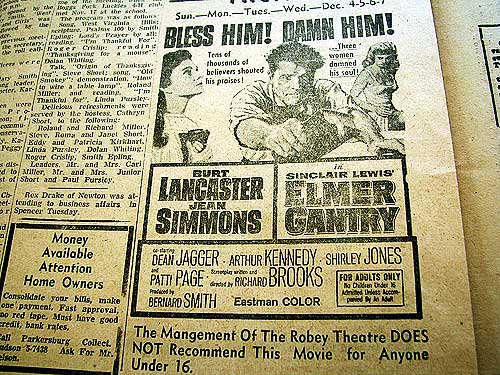 “BLESS HIM! DAMN HIM! Tens of thousands of believers shouted his praises! Three women damned his soul!” Starring: Burt Lancaster and Jean Simmons. (Co-starring Shirley Jones.) The Robey disclaimer: The Management of the Robey Theatre DOES NOT Recommend this Movie for Anyone under 16. (This must have been before standardized ratings.) See more about the historic theater here. (Over 100 years old, it is one of the longest continuously operating movie theaters in the U.S.)

The classifieds were pretty interesting. Look! A 1947 Dodge sedan. Check out the phone number. THREE numbers. 291. 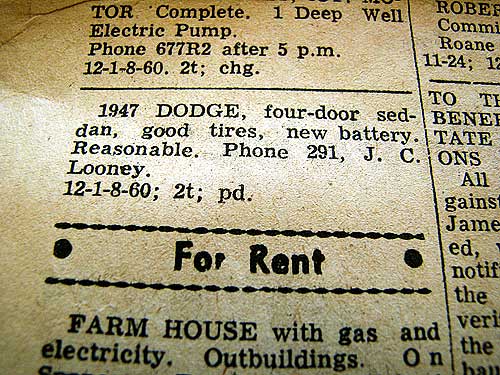 Let’s all call him.

I’m worried about this Hereford steer. I hope they found it. 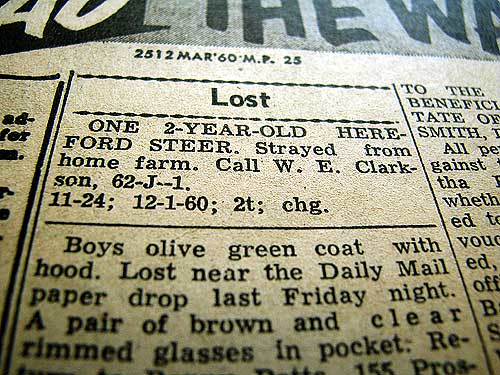 In other news, they were still talking about the presidential election. Nixon beat Kennedy in Roane County. 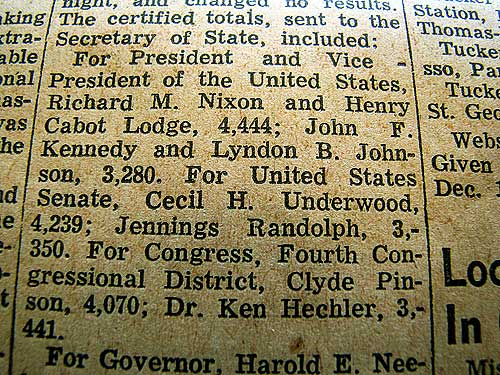 A bizarre accident was reported (not to mention the bizarre reporting). “Miss Penny Stephens, a Dental Hygiene student at West Liberty State College and the daughter of Mr. and Mrs. J. Stewart Stephens of Parkersburg Road, Spencer, suffered painful, but not serious injuries when she fell from an automobile near West Liberty Wednesday of last week. She was on her way here for the Thanksgiving holiday. The car door flew open on a curve and Miss Stephens careened to the roadway. The vehicle was traveling very slowly when the mishap occurred, but Miss Stephens was bruised nearly all over from her shoulders to her knees.” 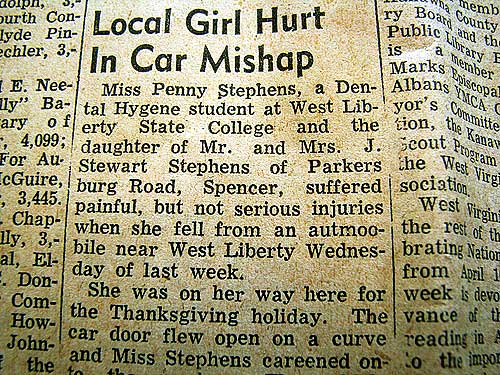 I think somebody pushed her. Don’t you?

And… “What can be a better choice for this season of the year than the tangy goodness of a fresh apple pie?” 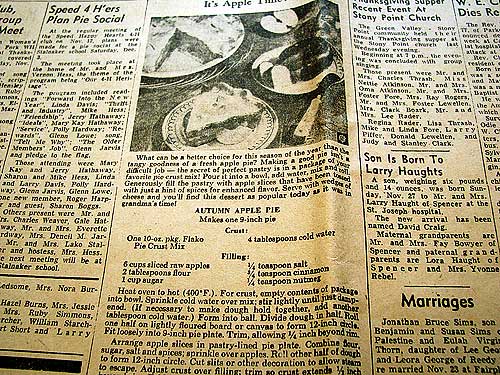 The article goes on to suggest that the secret of perfect pastry is a package of your favorite pie crust mix. WHAT IS WRONG WITH THESE PEOPLE?

The secret to perfect pie crust is right here.

And then I found the Personals and if I wasn’t already enthralled for real, I was then. 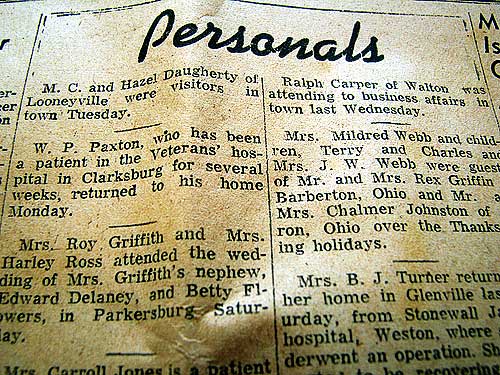 In case Mrs. Carper was wondering where he was.

“Mr. and Mrs. John Dye [one of my dad’s cousins] and son Carson were visiting in Akron, Ohio this past week with Mr. and Mrs. H.E. Young.”

“Mr. and Mrs. M.K. Giersch and children, Margaret Ann and Fred of South Charleston were Thanksgiving guests of Mr. and Mrs. O.F. deGruyter.”

“Mr. and Mrs. Clay Miller will leave Thursday for a two-week Caribbean cruise.” BRAGGING MUCH? And oh, for the innocence of December, 1960 where this didn’t represent an invitation to burglary.

“Mr. and Mrs. Cecil Moss and grandchildren of Newton were shopping in town last Friday.”

And on and on, an entire HALF-PAGE of gossip. So can I just say……..

Ms. Suzanne McMinn of Walton attended to business affairs and lunched in town on Friday followed by shopping. THEN SHE ATE SOME PIE AND WENT TO BED.

I’m so sending that to the paper.