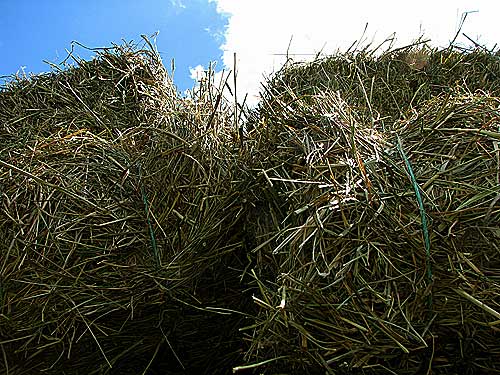 Hay stacked up to the rafters is, at this time of year, akin to a full pantry. You just want to stand around and stare at the jars, I mean bales, and soak up the satisfaction of being prepared for winter.

I remember when I didn’t know the difference between hay and straw. How times have changed.

This is straw, sitting by a fodder shock, waiting for some pumpkins to show up and complete the party. 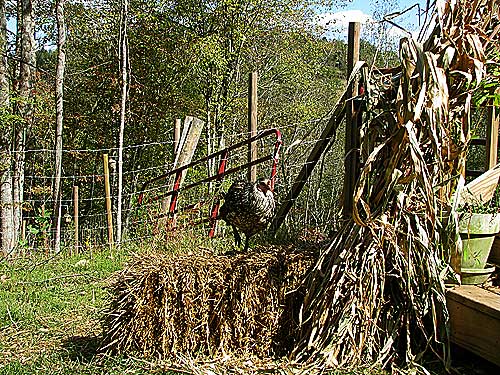 Straw is a little more yellow than hay. Hay is a little more green. That’s the main difference between straw and hay. Okay! Stop beating me, you real country people! Straw is the hollow stalks of grain left after threshing. Animals will eat it (case in point, mine, whenever fresh straw is put out–animals love fresh straw! the goats eat it, the chickens peck it for bugs, etc, fresh straw is always very exciting!) but it’s not particularly nutritious as the good stuff’s been stripped out of it. Animals won’t really eat a whole lot of it, unless they’re starving. It’s just a curiosity they get excited about whenever new bedding is put down then they get over it and start sleeping on it. Hay is the real deal, good stuff included. Hay is made up of grasses, alfalfa, clover, etc, that is grown specifically for food for animals, particularly in the winter when fresh grass is unavailable. 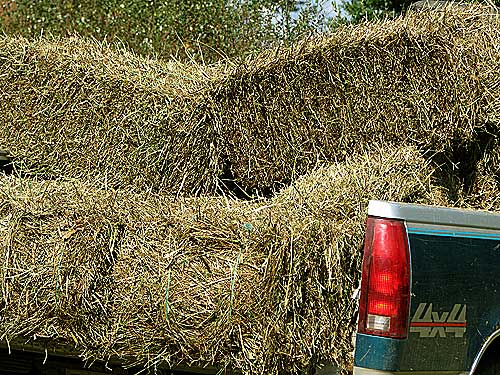 Sometimes I’ll hear people on television talking about fall decorating and referring to straw (which is cheaper and what is normally sold for craft/decorating purposes) as hay. I always find that amusing. Because I used to do that.

We took a drive in the country and picked up a load of hay this past weekend. Hay’s cheaper if you get it right out of the field. Then the farmer doesn’t have to haul it and store it. This farmer’s got his hay trained up like sheep. See his hay bales dotting? 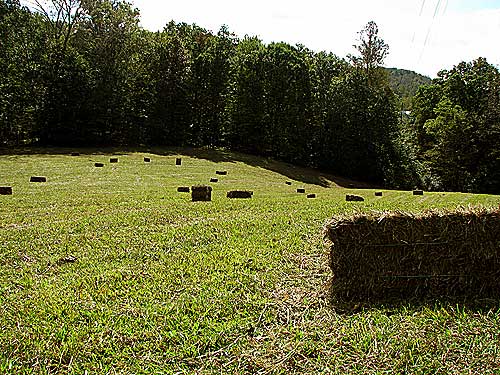 If I feed dotting hay to clumping sheep, will it make the sheep dot or the hay clump? 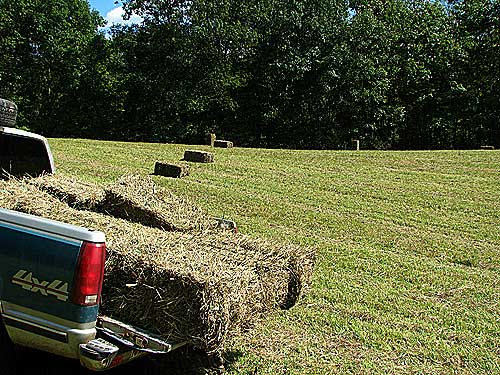 We drove back and forth and around the meadow, picking up bales of hay. 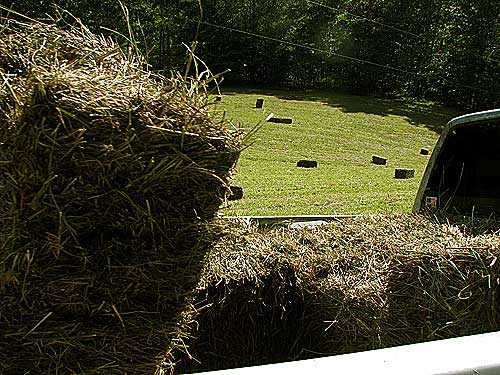 The hay jumped right into the back of the truck! I didn’t have to do a thing. 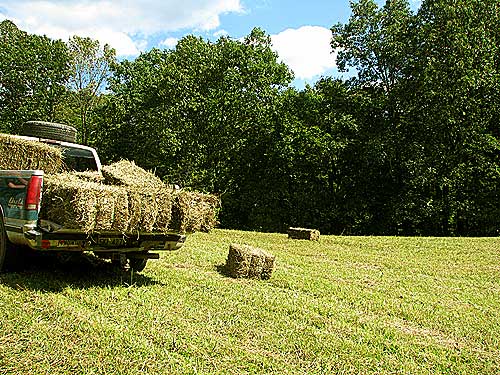 I told you that farmer had his hay trained up right! The hay even volunteered to drive the truck while I took pictures. 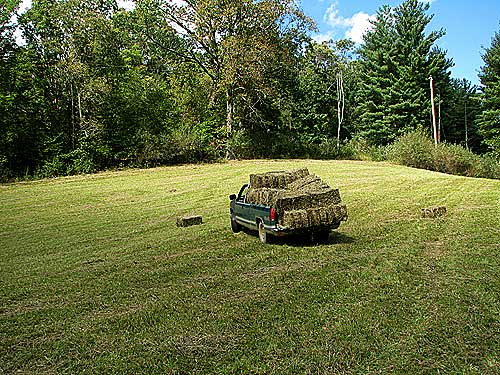 Okay, maybe somebody was there doing all the heavy lifting and the truck driving. But the hay was still dotting, that part of the story is all true! 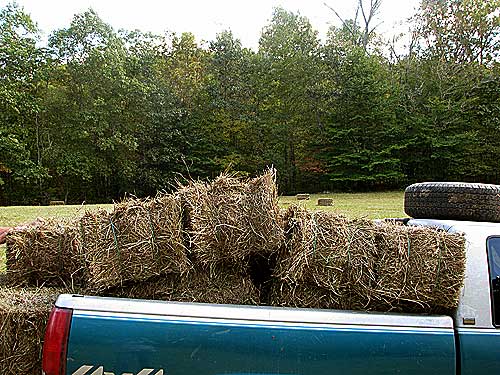 Well, the farmer is really the one who made it dot. In fact, the hay didn’t do a single thing. It just sat there. 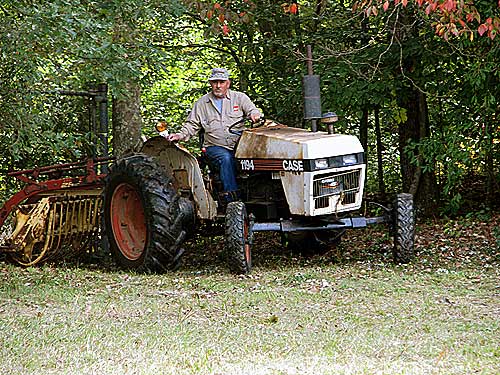 Does this mean the sheep are going to keep right on clumping because there’s no such thing as dotting hay? 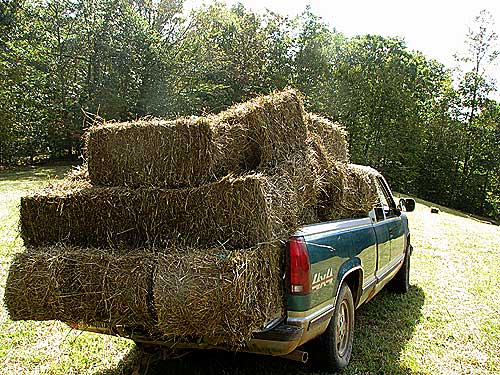 It was a lovely October day to spend in the slanted little hay meadow. 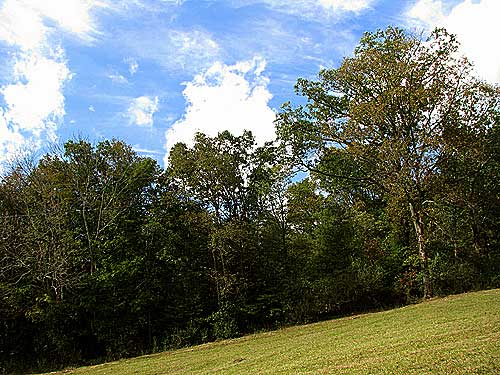 I watched the rear view mirror all the way home, expecting to see hay bales tumbling off, even though everything was tied down. 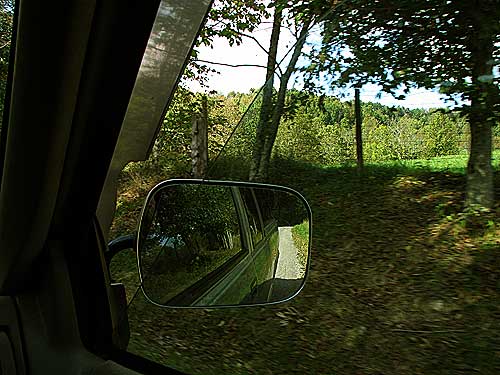 Everything stayed put. And then somebody unloaded it all and stacked it up. 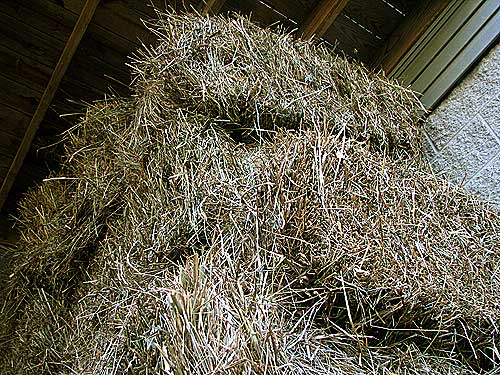 The hay stockpiling isn’t finished. This is just a start. I told 52 he should go back for another load before the farmer hauls it and stores it and charges more. Though I’m kinda busy so I don’t think I can make the second trip. 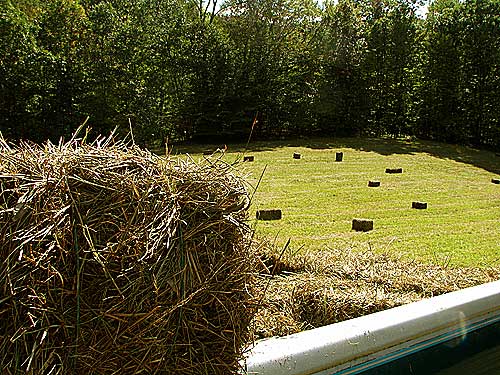 Only I just don’t know how he’ll do it without my help!