After snow that had remained on the ground for nearly three weeks due to freezing and sometimes sub-zero temperatures, this past Wednesday we had a meltdown and rain. I was caught on the road home to my farm behind a huge fallen tree. 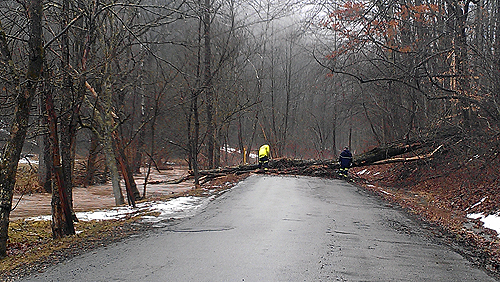 Luckily, state road workers showed up and eventually cut and cleared it out of the way. 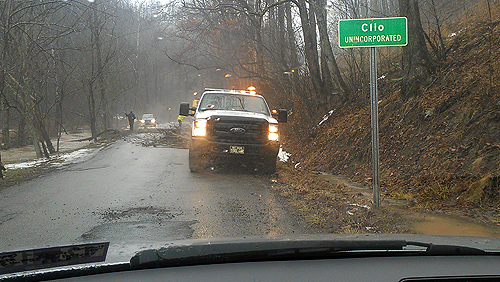 You can see how high the creek was to the left of the road in these pictures. There was flooding in many places, and it just got worse overnight going into Thursday when I woke to no power, no phone, and over four inches of snow on the ground. 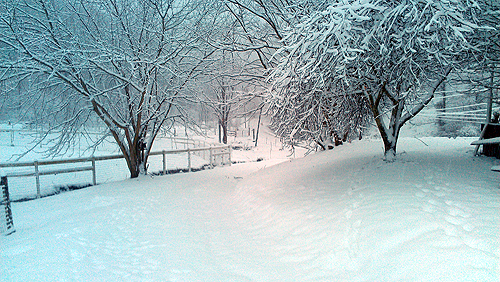 I’d moved my car to the bottom of the driveway on Wednesday night. 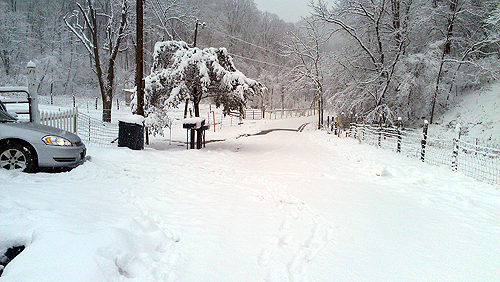 Gamely, I went down to my car Thursday morning, went to great effort to clear it off, and pondered my ability to actually drive anywhere. 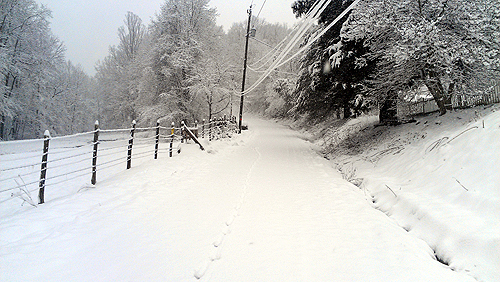 My chances weren’t looking real good. Especially since it continued to snow all day. These pictures were taken in the morning. By afternoon, there was nearly a foot of snow on the ground.

My neighbor Andy came to plow the road with his four-wheeler, but I think he was just entertaining himself. We hadn’t seen a real snow plow here all day, and the four-wheeler plow wasn’t really solving my problem. And I had a problem. I had to get out. I’d been called to testify as a witness Friday morning at a courthouse in Ohio. Because of the distance, I was being provided accommodations for Thursday night. If I could get there in the middle of the worst storm in West Virginia all winter. There was flooding, deep snow, ice, trees and power lines down across the road, power and phone outages everywhere, and not enough snow plows to clear the roads as fast as the snow was coming down. If I was going to get there, I was going to be in for an adventure. Having made the decision that there was no way I was getting there under my own steam in my car, a representative from Ohio was sent to fetch me. They arrived in a four-wheel drive at my farm after dark, and the trip back out involved narrow cuts between fallen trees, skirting flood waters, and power lines dangling so low across the road we barely got under them. It was dark and icy. We passed a snow plow in a ditch and reached the interstate–which was little better. I’ve never seen the interstate in such bad shape–snow and ice everywhere, cars and trucks in ditches along the way. We slid at one point, and right after, an 18-wheeler passed us. If the 18-wheeler had been beside us when we’d slid, we would have crashed. I was never so glad to see the bridge over the Ohio River at the state line. As soon as we crossed the bridge, the interstate was instantly clear. Either there is some magic in the air on the other side of the river or they were keeping up better in Ohio with their plowing. But in any case, the rest of the trip was easy from there. It was nearly midnight by the time we arrived at our destination, and I was just thrilled to be alive.

On Friday morning, I held up my hand in an Ohio courthouse, swore to tell the truth, and testified. It was surreal. I was actually asked to point out an individual in the courtroom. (They really do that. I thought that was TV stuff.) I was questioned for what I believe was about 30 minutes by two lawyers and a judge about certain experiences and knowledge that I had which pertained to the case. I looked someone in the eyes who I hadn’t seen in six months, and I did not flinch. I thought I might feel emotional when I locked eyes with the individual I was there to testify against, but all I felt was a moral obligation. I told the truth, and when it was over and I left the courtroom, I texted Morgan and told her about it. She said, “I’m proud of you, Mom.”

There were times in the past two years when I didn’t feel as if my daughter was proud of me. And I wasn’t proud of me. I was involved in a relationship that wasn’t good for me. But on Friday? I was proud of me again and so was she. I would ride through the dark on an interstate of ice all over again for that feeling. It was worth it.

P.S. The drive home was much easier. I was deposited safely back at my farm by my ride. Please understand that I can’t discuss the case, so please don’t ask, thank you. I can only discuss my feelings about it. When I got home, my power was on and my phone was back. And all is well in the world again.