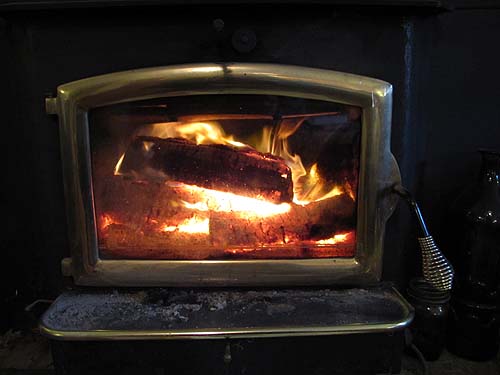 I’m having a hard winter. I know I’m not the only one. This is the first truly bitterly cold and snowy winter since I moved to Sassafras Farm. I was spoiled by two mild winters, as if, perhaps, the universe was taking it easy on me while I settled in to my independent single life here.

Accustomed to power outages being my primary winter challenge, I’m always prepared well here for power outages. I have a button-start generator, and I keep several cans of gas on hand. I keep my generator charged regularly–and I finally figured out how to use the choke for cold days when it won’t operate automatically like it’s supposed to. (I had to get help starting the generator a few times until I understood the choke operation.) I have a small wood stove in my fireplace, and did consider upgrading it, but decided against the expense. I use my wood stove as a backup source of heat, for temporary purposes if for some reason the generator won’t start, or until I get more gas for the generator, or if the furnace isn’t working. These have mostly been non-issues for the past couple of years. I have the furnace set up to run on generator power in case of a power outage.

My furnace has broken down twice this winter, on the coldest days of the year, and it has really thrown in my face that I’ve become too dependent on my furnace–and the free gas. Because the gas is free, it is my primary source of heat. The furnace broke down this week, again. I had a master electrician out here the same day. I had the motor replaced about a month ago. This time, there was a broken bracket supporting the motor and the fan. He rigged the bracket so that I could run the furnace until he could find a new bracket. Yesterday, he brought out a new bracket, but the fan turned out to be so old that it broke when he tried to take the housing apart to replace the bracket.

Now I need a new fan. By this time, it was too late, stores were closed. He ordered a new fan for me first thing this morning, but it won’t be in until tomorrow at the earliest, and possibly not until Monday. Meanwhile, it was 46 degrees in my house this morning. Because I don’t have a lot of wood on hand, I conserved wood last night, not burning any. I knew we could make it through the night on the heat that was still in the house. This morning, I got a fire going first thing.

And contemplated my dependence on the free gas and the furnace. And wondered why this winter seemed harder than even the worst winters at Stringtown Rising. I wasn’t alone there. I wasn’t the single head of the household. There was someone to share the struggles with. And no, I don’t miss him. What I realized I miss is dependence. I was raised in a very traditional home, with traditional women’s roles written into my genes. One of the greatest struggles of my life is to take hold of independence and own it. This winter has been like a disaster boot camp with non-stop problems. The furnace is just the latest in the series. I tend to get depressed and scared when I’m facing problems alone. But I know that with each one I face alone, I grow stronger. I don’t have to look at this winter as one long line of disasters. I can choose to see it as a tutorial.

How to Make A Homemade Backbone:

Mix in a large bowl to combine. Transfer to a lightly greased casserole dish. Bake at 450-degrees, after you can stop using your oven to heat the house. Serve with a dollop of humor on top.

The furnace will get fixed. I’ll lay in more wood to lower my dependence on the furnace. I might go pick up another little electric heater because the one I have has to be kept in the cellar to protect the pipes when the temperatures are as cold as they are now.

And by the time this winter is done with me, I figure I’ll have that dependence thing whipped, too. Because you know what? I can make just about anything from scratch.